For many the coincidence of three hurricanes and an earthquake, almost all of them at the same time and in the same region, is the result of what we call global warming and which is none other than the cost of a very irresponsible way of development, a certainly old way, and out of context, that emerged at that period in which homo sapiens still thought their presence in nature barely had minimal effects and that all the natural resources would never be a restriction to their hopes of becoming God.

That period in which the “dominion of nature” was the phrase in vogue and demonstrating the capacity of “dominating nature” was one of the keys to demonstrating the power countries had. Making the world’s largest reservoir, or the largest hydroelectric plant, having bigger and the biggest extensions of cultivated land at the expense of every living being, razing thousands of hectares of forests or contaminating hundreds of kilometers of rivers or entire bays, was almost always praised as one more demonstration of the power of homo sapiens.

What’s interesting is that all the countries and perhaps also a great deal of the politicians, independently of their ideological creed, succumbed to that philosophy, it is true and it has been unfortunate. The Soviet Siberia is a good example as well as the Brazilian Amazonia, or the large plains of the U.S. Midwest already today without those legendary buffalos, and what can be said of the Spanish forests that one day Feliz Rodríguez de la Fuente showed us had almost disappeared in that documentary series I enjoyed so much and that was titled “El Hombre y la Tierra.”

I don’t know if Irma has to do directly with that crazy race of human beings to become God, but as one more Cuban who was an eyewitness and sufferer, I am convinced that at some time after this storm of the century and of this battle to recover, at least us, the islanders who suffer that wretched circumstance of (salt) water everywhere, must make a collective exercise of thinking about climate change, about our future and that of our grandchildren and great-grandchildren.

Irma will have immediate costs, some of them immense, especially those associated to the loss of human beings. The causes of the losses no longer matter, although most of them could have been avoided. Others, also painful but of another quality, are those associated to the destruction and material losses, personal and collective, of the country and of families. Some also avoidable if there had been greater precaution. Others impossible to avoid due to the unheard of fury of a hurricane that seemed set on changing the geography of the entire island.

For Cuba’s aspirations of a short-term growth, Irma is undoubtedly a hard blow, difficult to quantify in pesos and centavos. Thus the 1 percent GDP growth hoped for in 2017, recognizing that without Irma it was already very difficult, will now be an almost impossible goal to meet. 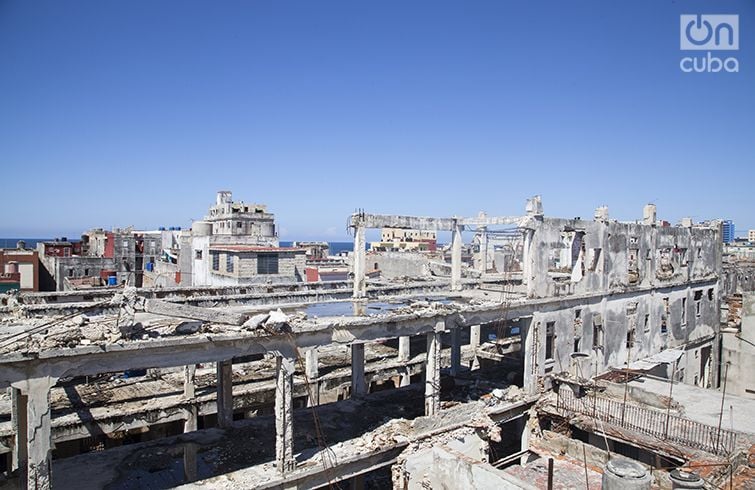 Irma visited all our important tourist destinations, it left none of them alone, when the high season of the tourist harvest was almost at the door; it strolled through our cultivated lands like a seven league giant, it downed banana trees and sugarcane, it destroyed production warehouses and factories, it damaged more than 90 oil wells, it put out one of the country’s most important electricity plants; hundreds of homes today cannot be inhabited and many will never be again.

To the cost of the destruction it will be necessary to add the cost of the reconstruction and the time used for this, and not spent on other tasks, difficult, very difficult to quantify. Making a greater effort is always the most immediate recourse, even for this people who have made a great deal of effort in these last 26 years and has had to face and overcome a very difficult combination of diverse types of hurricanes, from the disappearance of the USSR, the intensification of the U.S. blockade, the special period, the Bush, etc. etc. administrations. I don’t believe there are many who doubt that capacity for effort and sacrifice.

But just like today we devote ourselves to the immediate reconstruction, we must at some moment make a small stop on the road and think of that new future that climate change has in store for us.

Previewing is the best way of winning, of adapting ourselves to nature instead of dominating it and competing with it is also the most efficient way to reduce losses.

While I was walking along the highway that goes from my town (Santiago de las Vegas) to Cacahual, when Irma had barely passed, I thought of how much damage could have been avoided if the trees that everyone knew would damage the electricity and telephone lines had been adequately pruned.

We must rethink our city, our way of building, our infrastructures. Perhaps we can find, always looking at the future, other types of trees, less leafy, with stronger radicular systems, since what we cannot imagine is our cities without trees. We must think of organizational ways that allow us to maintain the systematic pruning, without depending in critical times on a supreme effort of State enterprises and institutions.

We must endeavor for the alternative of microlocalized solar energy not to become a way of saving fossil fuel but also a way of achieving a small-scale solution to situations like the one we have now lived. But the rooftops of out buildings today continue empty of photovoltaic panels. It is true they are still expensive, it is true there is a need for a backup, it is true that it isn’t something we can do right now, I’m only calling attention to when we look at the future, as it appears in our vision of the country, sustainability must be an inescapable condition. Providing Cuban families the possibility of using solar panels is much more than a good economic formula.

And our constructions, the ones that already exist, some of them that today resist in an exercise of “miraculous static,” but above all those new ones we will build must be capable of increasingly reaching a better understanding with that “climate change” that predicts for us a more complex future.

And improve our infrastructures; perhaps the most expensive, but also the most difficult to recover.

Our water, WATER!, supply systems on which so much has been worked in these recent years, but where a great many individual cisterns remain alive (perhaps of the most inefficient and of the most primitive of all the forms of distribution and storage) that not only are contaminated but also practically make it necessary to multiply the supply of water. Individual cisterns have been the stalest solution of citizens to guarantee their water, but in no way is it the most efficient and rational.

The electricity and telephone grids: that’s another challenge. Cuba has the immense advantage of a totally connected national system of electricity, from Pinar del Río to Guantánamo. It is true that the underground grids are more expensive, but they are safer. We must think that for the future projections of our cities, the aim of underground grids should be included in the urban planning. I would say the same in relation to the telephony.

The drainage and sewer systems, at least in this capital of all Cubans, should be one of those priorities. You don’t need a hurricane like Irma for our streets to flood, from 5th Avenue in Miramar to any part of the most modest barrio. Repairing the drainage system is an investment difficult to recover, but the cost of not repairing it is paid every year, sometimes every week, each time a good downpour reminds us that we are in the tropics. It is again an exercise of a difficult solution, since the shortage of resources and also at times of persons who want to work in those tasks, makes for no immediate or simple solution.

Meanwhile, while ideas resembling the sustainable development of environment-friendly cities materialize, the prevision is decisive and the improvement of the related systems is fundamental,

It is true that all this is expensive, it costs a lot and it is very difficult to face for a country in the conditions of Cuba today. But imagining our cities in the future, incorporating these questions, will save us a great deal of this cost.

Our situation today, after Irma, is much better than that of some of our neighboring islands. Our early warning systems function well, our capacity for recovery has been challenged by a phenomenon whose intensity has been extraordinary. The frequency of phenomena of this type doesn’t seem very high, but no one can affirm it. It is again a learning exercise, it is also – it being now – an exercise of effort and solidarity.

Since Irma passed and not even the force of its winds was able to move us from the Caribbean and therefore this archipelago will continue in that same latitude and longitude, then, when we have a respite, which all our people deserve, we should look a bit further beyond.

And all of us, citizens, inhabitants of these, our cities, should also be more friendly and respectful to them. It is true that we still lack systems and that the ones we have at times don’t work as they should, but it is also true that with our lack of respect for the city, for our barrios, we are contributing to those failures to become bigger. It is an entire collective exercise we should do.

Thinking of how our future cities must be is not an exercise of science fiction, it is not a “waste” of time, it is not a strange idea of a group of mad people disconnected from the present, it is also part of the commitment we have with the future which we cannot waive, it is something we can do, it is something that will allow our grandchildren to live more peacefully, even when other “Irmas” hit our country.

Cuba is not closing its door to U.S. investments