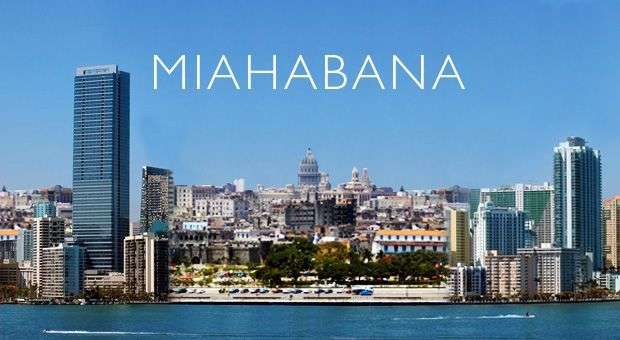 A few days ago, while I was reading news about the city where I live and the city where I was fortunately born, an idea came to me that I would make into a reality, if it were up to me. The gesture, one of goodwill and complete common sense, might seem crazy to some, but there are increasingly fewer of those “some,” and the “fewer” group tends to be irrelevant…. I am sure that when the moment arrives, despite the antis (the fewer)—the ones who hold on to obsolete, negative manias—the majority would vote for this idea, both here and there, that is, in Miami and Havana. Here and there seem more alike every day; they seem to be sailing more and more along the same course, and I believe that no bad weather will divert them. Until a few years ago, we were separated not only by geography but also by a universe mined with political and ideological differences, dogmas and slogans, and opposing interests and priorities. Even more unfortunately, we were divided by strong winds of hatred and bitterness that blew in from both shores; it all seemed like an endless nightmare. Now, it’s not so much the case; the dawn is about to break, and the “windblowers” have run out of steam. The air is less stale, less polluted, fresher, and if something is coming, if something is approaching, they are wonderful days for flying kites of love.

For many years, the two cities were completely disconnected, detached, frayed; the unfastened cultural, social, commercial and even family ties were evident. Havana and Miami, so close yet so far; cities on the verge of breaking the Guinness world record (if it exists) of the unhealthiest and most divided families on the planet. And when I say unhealthy, I mean that together, we have been showing the symptoms of a single illness, composed of indifference, rejection, alienation, hate and bitterness. Now that’s not so much the case; it hasn’t been easy, and it hasn’t changed spontaneously…. Every day, both cities are more united, and strong cultural, social and commercial ties are flourishing, something that is almost impossible to stop.

Once upon a time I heard a Hindu guru say that you and me don’t exist; the Me is nothing more than the Ego; “we are one and the same, this is, the true Being…” and he told me, “As long as you think that you are You, and I think that I am Me, differences and conflicts will exist between Us.”

Miami and Havana naturally and irrevocably are searching for each other, discovering their true Being; it is inevitable, inescapable. There is no need for a Tarot reader or the “Letter of the Year” to tells us this; it is a fact. The calendar announces it, and time places its stamp. Miami and Havana will be declared Sister Cities.