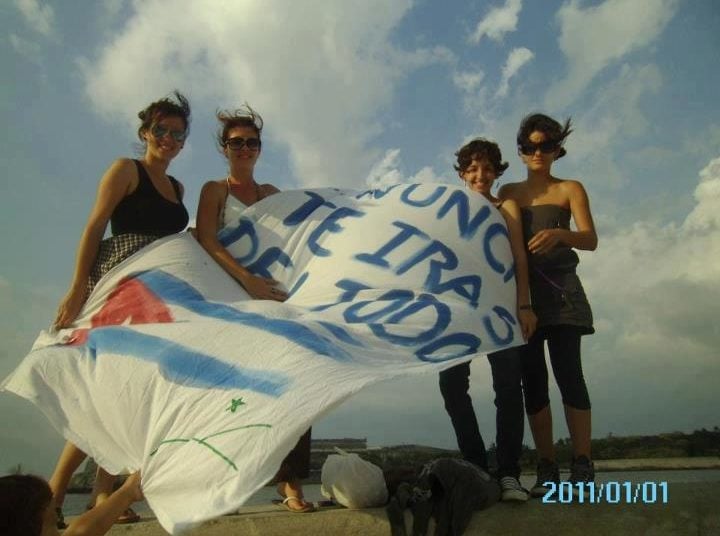 During a recent visit to Havana, I saw, on one of the social networking sites that half the world now uses, a beautiful photo that moved me to the point of sweat in my eyes, so as not to say tears.

The photo was taken by chance by photographer Gabriel Dávalos. It tells us the story of a farewell get-together for a young woman who is leaving the country and who decides to walk through Havana for one last time with her friends. Her four girlfriends climb up onto the Malecón seawall, standing with their backs facing north, and surprise her by unfurling a white sheet with blue letters spelling out “You’ll never really leave” followed by a Cuban flag (view the photo on www.oncubanews.com).

Days later, on this side of the pond (Miami), where I have put down roots and sowed seeds, a person suddenly asks me, with no forewarning, why I always write about Cuba, and why I always describe it as the most wonderful place on the planet, the only colorful rose on an otherwise bare rosebush: “That’s right, wonderful,” this person said, “as if nothing bad existed. So why do people leave? Didn’t you leave?” the person asked in a rude, reproachful tone.

Despite my ample experience in responding to these “almost”-justified bursts of anger that sometimes ambush me, this time I remained silent. The “didn’t you leave” had sounded like a clap of thunder in my ear…. Did I leave? I asked myself uneasily. You went, we went? I began contemplating the matter….

It is possible that we have left, or at least, that is how we felt when we decided to emigrate — for whatever reason — and were involuntarily stripped of our rights. This was intensified for those of us who moved to the United States. There are many of us who are unfortunate in that way (I think that not being able to go back and live in your country is not a sign of good fortune, although we may have found good fortune elsewhere); for us, the “you left” is definitive, an irrevocable and permanent decision. You don’t belong anymore, you don’t count, you leave and all of your rights are left behind in a box marked “You have been notified.”

For those of us who have “left,” leaving is not an option, in my opinion; it has always been more of a provocation. Nevertheless, I think that those of us who make the sad, painful decision to emigrate — no matter what the reason or motivation for doing so — never go away from Cuba, we never really leave.

Because it does not matter what the final destination is, the tortuous procedure of starting from scratch far away from our native land, family and friends and adapting to a new language, a new culture and different climate; Cuba emigrates with us. Cuba is always present, like the most colorful rose on the rosebush.

Today is not like yesterday, but it is not the way I wish it were, either. Nevertheless, I wait, stoically and without any ill will, for a sign that I can return, not to be bothersome or imposing, but simply because it is where I want to be, work, contribute, rest, live and possibly die.

A legend of a Miraculous Love