The idea of ​​the “New World” does not refer precisely to the concept derived from Christopher Columbus’ feat centuries ago. Neither of a nearby, habitable planet, to which an international spacecraft is about to land. What is this about then? 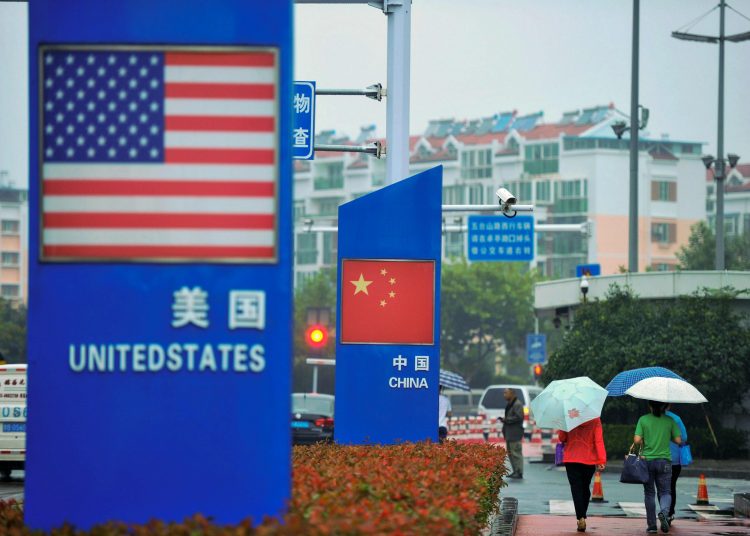 Posters with the U.S. flag and the Chinese flag are seen outside a store selling foreign goods in Qingdao, eastern Shandong province, on September 19, 2018. Photo: AFP/Getty Images

When we speak of the “New World,” we refer only to the end of the unilateral U.S. hegemony based on the achievements of a power that seems determined to become the first in the world: China. It is a society with an economy that combines the market with planning, capable of eliminating cyclical crises, stopping and reversing ecological deterioration, guaranteeing the growing well-being of a population that participates fully and democratically in its direction, the State.

The revanchist onslaught led by former U.S. President Donald Trump against socialism, led by China, is a position consistent with the “Old World” political worldview that Trump represents. Hence precisely his ideas that China should be stopped and destroyed because it has the highest representatives of capital on the ropes in global economic competition.

The socialist, I would say social democratic tendencies, but further to the left in any case, within the U.S. and around the world are in fact too much for the far-right political establishment of that country.

Even when they scare us with stories about the Chinese “claims” of domination, we are talking about a superpower whose essence is not imperialist, even though it naturally overflows its borders with its surplus capital, its leadership in technology, exports, in short, economic.

In this “New World” that we inhabit, Brexit would be nothing more than the tantrum of two countries to re-encounter the Anglo-Saxon cultural, technological and economic dominance that is being irretrievably lost to give way to new world order.

The taking of the Capitol last January is a symptom generated by this global reconfiguration.

The backyard, Our America, in the words of Martí, is getting out of hand for the U.S., largely driven by socialist ideas. Having tried to stop this Latin American emancipation with Trump at the head of the U.S. presidency seems clear evidence of what resources, close to fascism, are resorted by the “Old World” to sustain itself.

President Joe Biden‘s victory in the U.S. is also another unmistakable sign of the “New World.” Despite the ties that he maintains with that country’s big capital, the party that he represents is an amalgam that includes the most progressive sectors of that society.

The role of the state in a world in decline

The COVID-19 pandemic has revealed that only with solidarity, cooperation and mutual help can we save the world from the disease, and from a large part of the other problems that afflict it.

In the same way, the health crisis derived from the pandemic has exposed the consequences of the policies that with the excuse of “saving the economy,” read “saving capital,” plunged some countries into a recent unprecedented depression.

I remember the predictions of The Economist, back in March 2020, about the prevalence of the Western liberal model to deal with the pandemic. In the time that we have been fighting COVID-19, the leaders of the Anglo-Saxon world, mainly the United States and the United Kingdom, have set all the records of contagion and deaths from the disease and the first one is incredibly close to the number of deaths it had from the misnamed Spanish flu when the development of medicine was significantly lower than today.

This contrasts with the results of the rest of the so-called English-speaking “developed countries,” such as New Zealand and Australia, which, outside the global prevalence complex, used the central state and their condition of islands to minimize the effects of the pandemic. The role of the state in the economy and in all of society reveals Marx’s predictions and their adaptation by Keynes to save capitalism after the Great Depression 90 years ago. It is socialism that will stop this incessant and geometric growth of our species, which threatens to eliminate all of them with which we live on earth. It is the New World to which we are arriving.

But would the state be the central government?

The U.S. attacks China on all fronts, especially on the economic front, trying to stop it. What hurts the most is the absence of cyclical crises and the impossibility of competing with Chinese productions. They allege, many times with capitalist reason, the intervention of the State as the decisive factor for China’s success, which would be unacceptable for the United States precisely because of the “unequal competition” that the mediation of this economic agent, now a protagonist, would give companies of the Asian country.

They do not realize that the insoluble problem that the U.S. economy has lies precisely in the denial of the essential regulation that the State can carry out to achieve the necessary balances and guarantee the rational growth of the model.

At the social level, the economy is made up of a central system, made up of the State, government and organizations, and a quasi-automatic one, as far as it can be: the market.

But this was not always the case, the functioning of society has evolved over time. The management system of socialist societies, beginning with their State, includes the entire network of civil society, organizations and agencies, companies, and even the last human being since it presupposes perfected, genuine democracy, that of Martí’s “with all and for the good of all.” Ah, but a society that includes capital under the condition that it does not exercise as a “class for itself.”

The taking of power by the workers in socialist societies is not synonymous with the state being infallible. Undoubtedly, society has taken an incredible qualitative leap by allowing the majority to access power, but this only creates the objective conditions for a better direction of the destinies of man. Examples of malfunction are not lacking, see Stalinism as the most obvious.

Capitalist systems also manifest well-developed states, not because of their oversized rampant bureaucracy, but because of the functions that this structure performs, but up to there. Its operation is consciously subordinate and limited to capital and the market.

Some 40 years ago, China broke away from dogmatic voluntarism and undertook the economic reform that allowed it to free the productive forces to achieve a rate of growth and development never seen before. Trying to decide what each family or each member of society eats every day, every week and every month is, in addition to being absurd, impossible. This is precisely the dogmatic voluntarism from which China emerged and in which Cuba is still stuck, now seemingly engrossed in getting out of it. Attempting to centralize decisions, at the current level of technological development of the country, such as what to buy, how to invest, what to sell, and in what quantities, at the business level, is just as excessive as the dogmatic Chinese model, in addition to being voluntaristic in essence.

Once this model was overcome, China today enjoys the well-being desired by its people, still growing and increasingly closer to a model of full ecological recognition that stops environmental deterioration and saves the planet. Like all human work, it is not a perfect undertaking and shows problems in its democratic functioning, but it does so with a total attachment to serving the entire working class: the Chinese people.

The most incredible paradox in the world today is that while socialist China is a leader against trade protectionism, the United States elects Trump to defend protectionism. This means that for now, at least, the market in two socialist countries, China and Vietnam, is managed in such a way that it performs better than under capitalism. This seems to indicate that when the market is managed by interests not subordinated to big capital, it gives better results.

We must not doubt that China and Vietnam can also return to capitalism, but even in this process of reconfiguration, they would have achieved what socialism stands for and what their societies cry out for: to take hundreds of millions of workers out of the deepest poverty.

The opposite could also happen. It may be that both countries continue to advance, consolidate their socialism and improve their societies along the way, democratize them deeply, perfect the role of the Party and the control of the working class over the objectives of society, managing to consolidate its socialist foundations. One is not leftwing just for supporting altruistic ideas, for clinging to an ideological orthodoxy, but, above all, for achieving the well-being of the workers.

Dialectical materialism is not a religion, it is a living conception in constant movement, evolution, and revolution, which this incipient “New World” seems to show. And it is not a temporary situation, although there will undoubtedly be ups and downs defending the retrograde idea of obtaining “profits at all costs,” and the neoliberal fundamentalism of zero participation of the State in economic affairs, but there is no going back to this tendency towards the market economic model with planning, or planning with the market, a dialectical unit that implies a decisive strategic role for the State in any country, beyond the concept of the socioeconomic system in which they want to accommodate it.