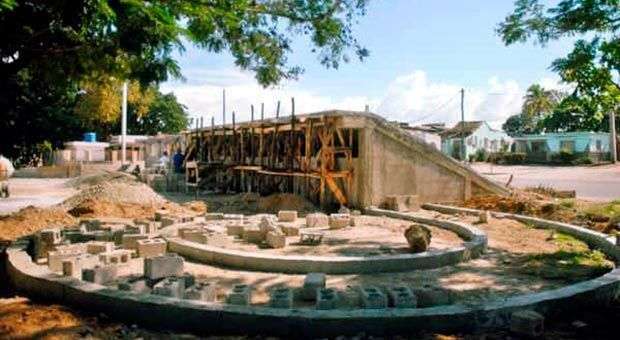 Before the curious eyes of the inhabitants of this city, a new construction called: the unusual house begins to take shape, where visitors could see extravagant phenomena that defy the laws of gravity. The strange way in which the building stands announces some of the oddities its five inner chambers will have, including the tilted pool table, water rising by its own weight, the wave that never falls, pendulums resting inclined and a seat from which the visitor can not get up without help. The project does not use the latest technology but is based on nifty application of physical experiments to create optical illusions and others, Domingo Alás, architect in charge of designing the building, said. To shape the unusual property, Alás consulted several experts of the territory and Cuba and left open the possibility to include other artifacts and scientific tests that might suggest visitors and even students from Luis Urquiza pre-college, near the place. The project includes a space for presentations of companies and performers of magic, a manifestation of the performing arts which, in November each year, Las Tunas province summons its most important event in the country, the Amphora Festival. Nothing that happens in the house is magical, Alás assured, but aims to contribute to the dissemination of science and spark interest in physics through a fun and entertaining way.

The unusual house is not the first project in which the architect born in Santiago de Cuba and a resident of Las Tunas uses physical experiments to create visual illusions; the solar monuments Marti Square (Las Tunas) and Caimito de Hanábana Memorial ( Matanzas), both dedicated to José Martí, are of his authorship.