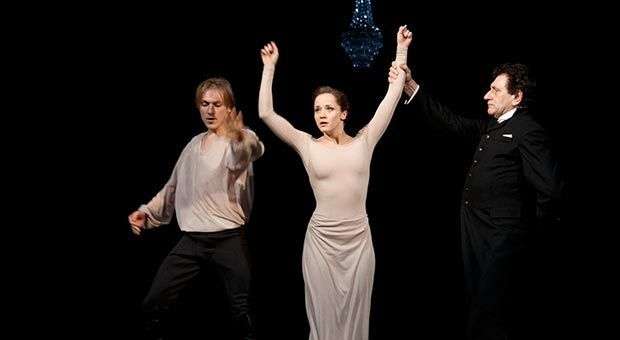 Russians arrived in Cuba with a gift. They knew exactly what they should bring. They can afford arriving anywhere; they always have good things to offer. They are Russians, and therefore they just can’t present any theatre play, but Ana Karenina. They were asked to open the Theatre Festival and they did. In fact, Havana´s 15th Theatre Festival was officially inaugurated at the National Theatre the Russian way.
Twenty four actors left their venue at Arbat Street in Russia, in the facilities of the Evguéni Vajtángov Theatre and came to Havana to perform. Almost a century old (more than 90 years), the Evguéni Vajtángov Theatre has a long history. “Every show is a party and there is no party without a show” said once Vajtángov.
Not a word was said in about two and a half hours during their presentation. The audience was certainly astonished. Everything said was said with gestures, music, rhythm and the body. This might take us to question art itself. Was it theatre, dance, ballet? What is actually theatre language, if any? The black swan, for instance, has to combine gesture and face to make us understand its pain.
The train –something quite frequent in Tolstoy’s works, everything starts with a train, Ana´s son is playing with a train, Ana leaves for Moscow on a train and in the train she meets Vronski, then she takes her life by throwing herself onto a train– but there wasn’t such train but a horizontal line of actors with suitcases. Ana´s despair for leaving her husband and run away with her lover could be conveyed with a jump or in Tchaikovsky’s music. Society´s neglect for Ana, her son running to her, the urge for Vronski, Ana Karenina´s nerves, salon dances, her suspicions on her lover, wild jealousy, all that was portrayed in the movement of the arm, in the movement around the stage, in jumps and turns and falling to the floor.
Ana Karenina was very well received in Havana. Each of its actors received rounds of applause. Russian theater should always be applauded and yesterday the Cuban audience realized about that. Russians have a theatre school and tradition. They have the mark of Stanislavski´s famous method, Gogol´s figure, Godowsky’s mastery and Bolshoi´s plays. Ana Karenina performed by Argentineans or Paraguayans is something to be seen yet. However, Russians have this Russian way of making theatre.
Havana´s Theatre Festival will end in November 3. What to say to the audience in such occasion? Run to the theatres. Enjoy Alvaro Solar and Georbis Martinez and Chinese play Thunderstorm. Don’t miss Bag Lady and Batida Teatro. But above all, don’t miss the Russians at the National Theatre; it is always good to see the Russians perform.

The United States: sixth among issuing nations of tourist to Cuba