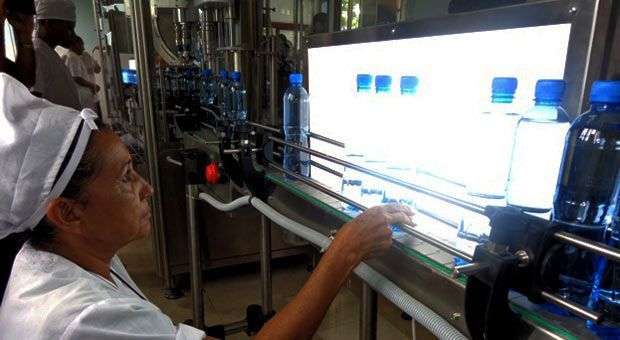 Cuba just inaugurated the third mineral water bottling plant in the country and the only one in its eastern region. Its name is Sierra Canasta and has been built in San Andrés town in the province of Guantanamo.

The plant, with Italian technology and whose structures are subordinated to the Company of drinks and refreshments in Santiago de Cuba, was built as a result of the cooperation between the Cuban government and the Spanish Agency International Cooperation for Development (AECID).

With a cost of about 260,000 euros, the industrial equipment includes: pre-treatment system to filter the liquid, bottle blow, the rinsing, filling and capping monobloc, automatic labeler machine that produces the packaging nylon.

The raw materials used are of domestic origin. From Villa Clara arrive preforms and caps for the 600 milliliter bottle made ​​in Ernesto Che Guevara Military Industrial Company and adhesive labels are made by Geocuba. The nylon will be provided by the CIMEX and water is pumped from the well, according to González Morán.

Meanwhile, the water bottles will be sold in a plastic container of 600 milliliters (ml) at a price similar to Ciego Montero water (500 ml) from Cienfuegos, bottling company that along Amaro, in Villa Clara, were until this month the only industries of its kind in the country.

From the installed capacity to date, they can produce at Guantanamo, some 500 8-bottle boxes per day, translating 144 thousand a year, which supplies the entire east of the country market, having as its main customers TRD chain stores, Palmares, the CIMEX, Tourism and Artex.

Although specialists who assembled the plant say the factory has a production potential of 1,500 boxes per day, which will allow, in the future, that Sierra Canasta win space in the Caribbean market, mainly in countries like Haiti.

Between a well and the market

Sierra Canasta is near the highway that links Santiago de Cuba and Guantanamo, only half a mile from the aquifer that supplies it without invading the perimeter established for sanitary protection of the well of which it has a mining concession.

This is required, with its requirements, by the Mining Act and the National Bureau of Mineral Resources, only entity that approves records and controls these reserves, certifying their preparedness for industrial processing.

The assembling of the facility as a local initiative project seeks to generate income and replace imports from the use of a well, about 500 meters away, whose underground waters are rich in a mineral capable of promoting elasticity on tissues and combat aging of the skin cells. The total amount of money invested for the construction and assembly exceeded 293 thousand dollars.

For over two decades, industrially, this deposit of mineral waters 330 meters deep was squandered. And it was not because of ignorance.

In 1993 the former National  Mine-medicinal and Thermal Water Group, led by Commander Jesus Montane Oropesa, considered and endorsed the Sierra Canasta well as suitable for bottling and marketing.

However, nearly 20 years passed and the mineral water –that could have replace imports-was only used in the supply of pipes of some communities in Niceto Perez municipalities and through pipes to the Daniel Llosas Preval Pioneers Camp and some houses.

A year ago, part of that reality changed. Now the well, whose land occupies more than 68 acres, has an owner and may operate for 25 years.

Although caring to ensure that water reserve, the National Bureau of Mineral Resources, set three zones of protection around it.

So today the site has four caregivers, the first of its deposits, where the water-pump is protected in a house without windows preventing pollution, and does not allow access to the pipes, although water supply continues to those who were connected to the well or to the nearest community and a pioneer camp and other facilities in the area.

The end of the world’s children