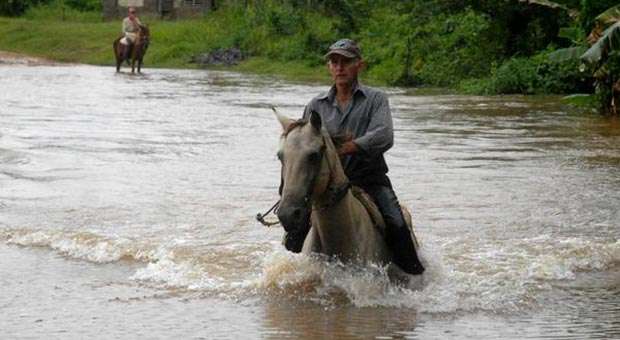 Over 400 people were evacuated due to heavy rains that caused flooding this weekend in the province of Villa Clara, according to Granma newspaper.

The majority of affected people reside in the areas of El Santo, in Encrucijada, Sagua la Chica, Camajuaní, and in the town of Dolores, belonging to Caibarién .

The Hydraulic Exploitation Company of the territory reports that in the last 72 hours a significant cumulative of rains had dropped in the areas of General Carrillo, with a total of 327.9mm; Remedios ( 247.8); Camajuaní ( 142.7); Caibarién (138.9) and Santa Clara ( 125.4), but in general it has rained almost in the entire geography of Villa Clara.

According to Diego Emilio Abreu Franco, a specialist of that company, the province collects an average of 85.2 mm in three days, which has benefited the dams that are at 83.7 percent of their capacity .

Civil Defense authorities assess that rainfall has been beneficial, essentially for the reservoirs, which this Sunday reached 847 millioncubic meters of water, which is very favorable for agriculture, population and other sectors.

The source notes that at the closing of this information, there were five damsthat were spilling: Alacranes, the biggest of Villa Clara; Palmarito, Arroyo Grande II, La Quinta and Minerva.

Tony Castro and the possible return of MLB to Cuba