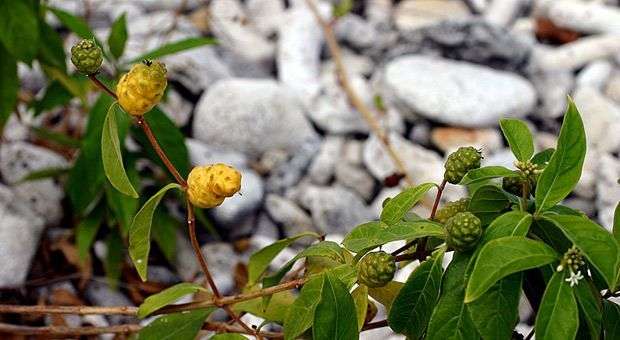 By 1945 the Cuban scientist Juan Tomás Roig reported in his research that the roots of Morinda L. royoc had healing properties in gastrointestinal and liver diseases. Currently the plant is the main ingredient of the PV -2, a dietary supplement created by Isidoro Scull , homeopathic medicine specialist and director of the Laboratory of Natural Products , belonging to the of the Villena – Revolucion Agricultural Polytechnic Institute.

Because of its stimulating effects, the supplement is prescribed in cases of loss of appetite, constipation, stress, depression, weakness, fatigue, and decreased libido.

Its antioxidant and nutritious action is based in its containing tannins, flavonoids , sugars , as well as phosphorus , calcium, copper , iron, magnesium , zinc and sodium. The PV- 2 also positively influences the immune system and sexual relations, and helps reduce manifestations of menopause.

Given the symptoms and ailments that it combats is always prescribed to adults, mainly elderly people. Given the high rates of aging among the Cuban population, the supplement could play an important role in maintaining the quality of life in older adults.

Those who perform heavy physical exertion, such as high performance athletes, are other potential consumers, as they need to increase their vitality. Tablets relieve pain and muscle exhaustion, so they are useful for recovery after exercise, in general.

The PV -2 is considered a supplement, not a drug. It is registered with the Institute of Nutrition and Food Hygiene and the Cuban Office of Industrial Property. Its marketing covers the country, Canada and Korea i, and there are plans to expand the market. The website of the Cuban Industry includes it in the category of non-traditional exports, along with other natural products such Ferrical , Bioestimulín , Nutrisol and Propolina .

Since its release to the market in the nineties the PV-2 has not shown adverse reactions or harmful interactions with medications, according to Dr. Scull. Still, it is recommended that only people who really need it use it.

The Morinda L. royoc is popularly known as Indian root, mouse pineapple, rhubarb of land, among other names. It is a shrub native to Central America and the Caribbean, reaching up to a meter in height, and grows in wild in mountainous areas near the coast. Usually the most used part of the plant are the roots, which is also used for the typical eastern Cuban drink pru.