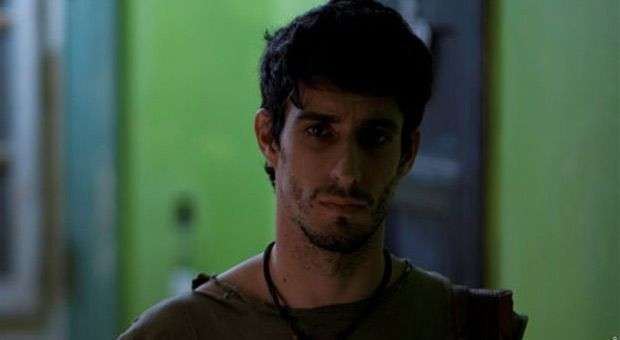 Giraffes, Kiki Álvarez´s last film, is already generating buzz in Havana. The slender animals are struggling for the prizes (C orals) of the 35th International Festival of New Latin American Cinema together with ¨Bocaccerías Habaneras¨, by Arturo Sotto, a very-in-the-Cuban-way film. Maybe that’s the most reprehensible of Kiki’s proposal, because for some the film abandons the guidelines of Cuban current cinema, and I think that’s a wise idea.

Álvarez, known for his intimacy in previous proposals as ¨ La ola¨, ¨Miradas¨ and ¨Marina¨, retakes this point to give us again a story marked by creative freedom and reflection at any cost of a reality that in no way is far from ours. In an almost complete confinement, as most of the film was shot inside the director’s house, the three protagonists seem harassed by an intrusive camera, a very sensible proposal that portrays and reveals the peculiarities of each character.

Giraffes, made in cooperative regime, gathered a group of actors and technical staff who worked totally free, something that the director does not get tired of saying. Thus we see in the film to Claudia Muñiz, who was in charge of the script, and plays Lia, a seemingly strong and practical woman. Olivia Manrufo performs the other female character, Tania, a kind of bone of contention, and we can say that she does it with a very valid and successful cleanliness. Yasmani Guerrero, whom we could also see under Arturo Sotto´s direction in ¨La Noche de los Inocentes¨ (2007), is the male lead of the triad, a half vulgar character, with a life philosophy rather idealistic, which for some even borders on the unbelievable. On this and other aspects OnCuba spoke with the young artist, to whom, in his own words, it was not easy to sneak into the body of Manuel.

Was it easy for you to play this character?

Manuel is a character that has points in common with me, but also has others that have nothing to do with me. I would be unable to stay in a place prostrated doing nothing. I’m always doing something, when I’m not preparing myself for a movie or a play, I’m writing poems that are only read by me or my girlfriend, or playing guitar. I’m constantly doing something for my professional and personal growth. When Kiki gave me the character I said it seemed easy and anyone who sees it can tell it, but it is not.

The character of this story cost me some work because I could not see perhaps a depth within any scene or something that hooked me to bring the character to an extreme situation, although it does happen from some point of view at the end of the story, it took some effort to build it. So, this character has more subtle scenes and I’m more accustomed to perform in theater or cinema also scenes where there is more passion, where are clearer feelings.

I did not see such clear feelings in the movie and then I said: what happens now? Why am I behaving that way? Why should I do this with this girl? Why do I kiss her and how do I I react to the other character? That also forced me to work hard to form certain Manuel’s psychology.

How did you work to build this character?

This character is enclosed in itself, in its own bubble. He has a wife who fully supports him, because she is working in Chinatown and is getting money, food. She is the one who maintains the household, but he is who keeps on the flame of love of this couple . He has a more philosophical vision of life, more open, she is more practical in some sense.

I could build the character seeing some people who did have such behavior, a very anarchist behavior, living in their own world and do not get related to the environment, they are rebels, who are not governed by their society and go against it. These people, of course, have their conflicts because they obviously have to interact with the social environment around them. So it was, I was taking from here and there. I have to say that Kiki also trained us, he gave us some movies to watch, especially to appreciate how the characters behave in real life, and it was like giving a documentary look at the characters.

This was very important because there are no large built scenes in Giraffes, but the characters go experiencing relationships depending on what one gives the other. The viewer is all the time wondering what will happen now, even on set I wondering it regarding the other two actresses. That helped me a lot to create this Manuel and it was very useful when performing actions in filming.

How was working with Kiki Álvarez considering some peculiarities of his work as director when filming?

Kiki gave me a lot of freedom in the scenes. There were not barriers, if there was a situation, there were the texts, but there was not strictness in that aspect. I liked that because I was trained at ¨Argos Teatro¨ with Carlos Celdran and he had that kind of direction, although sometimes he was more inflexible, but he also gave a lot of freedom. I try to practice that a lot in movies, I always make a character design, a characterization, although in Giraffes there was not one very strong, but you just followed the actions of the text and this already gave you the type of character.

Regarding Kiki’s technique, I enjoyed it a lot because he lets you see inside the characters without having to do almost anything. I could say that’s old cinema, which has been done too much, but I’m glad it has been retaken here and there directors interested in making that kind of film and not a vulgar one. So you could say that there is no formalism in that sense, some cursing is said but only two or three times, in situations that require it, but it is not represented as the common and vulgar Cuban behaves.

Some say that sometimes the characters and situations are a bit far from our reality, what is your opinion about this?

All films are Cuban; all stories are Cuban, first because they are made here and with Cuban actors. The story in Giraffes I do believe is credible because not everyone has such behavior, I mean, as some want to represent Cuban people in a more marketable condition.

What hooked me from my character was that I did not know how people would receive it and if t hey would say that was an unnatural way of being. I understand any comments people may have, I can understand that people do not like the movie, what I can not understand is they not to believe that any relationship can be that way, that a person can react, behave naturally and that you can accept another person because you are in love.

Who was Manuel for you?

Manuel is trying to find his place in society, which he has not found it, he is 25 years old, studied in a technical school, he could not reach the university etc… That’s what I made up to feel that I can be that way, to create and to believe me this character.

The film does not much deepen into the characters, but in the relationship they create at all times, the way they behave in every conflict. I think if we were a while back maybe Manuel was doing other things, but the film does not emphasizes both in past and the present. That was something I built for myself, I invented it to create my Manuel, which ultimately is also the director’s Manuel.

Manuel is a total lover, dreamer and poet, maybe the column that spiritually holds that relationship; the turning point in some sense of this story, the union -separation, to tell it quickly, of this love story. ¨Giraffes¨ is by far a true love story, I have no doubt about that.