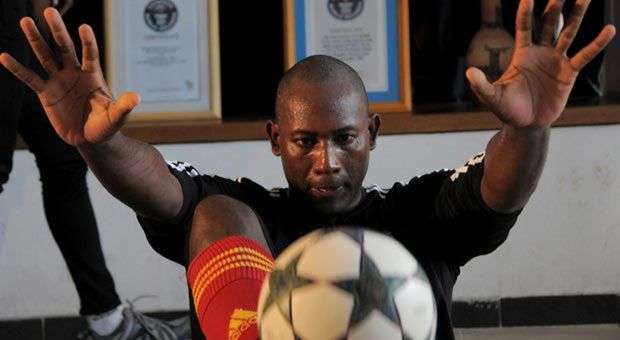 It is true that there are many Cuban sports men and women that have no glory to conquer left, but to find one with the constancy and stability of Erick Hernandez is quite complicated, especially because he seems to have no limits. At age 43 he broke three records in one season, an option that he had ruled out for some time.

In his latest adventure he shattered his own record dominating the ball from a sitting position with feet only at the Copacabana Hotel, stopping the clocks in three hours, ten minutes and three seconds, above its previous record of three hours, eight minutes and two seconds.

In one of the more complex forms of ball control by the huge physical effort, Erick has been devoted to raising the mark on four occasions, one in Bilbao Spain, right where the modality started, since it was the Iberian Luis, “the Bufalito” Sanchez who established the primacy for the first time.

Just that Erick in 2010 ousted him and has already raised it four minutes since he managed 3:06.03 hours in hotel Central Park three years ago. Now the attempt had other peculiarities, because not only had to think about controlling the ball, but also to maintain concentration through the constant passes to live television.

“It was a new experience, I had more lights than normal and time was frequently announced, a detail that I do not like to know. Several times I lost concentration and recovered it after involved a greater physical exertion “the record holder confessed, exhausted after the event.

His coach Jorge Velasquez explained that Erick underwent strong tests to break the record, because in each workout muscle fatigue sought to support the requirement of the attempt.

“It’s much wear on the hips, quadriceps, and lower back and legs especially because the constant bending. For example, in the first hour and a half ball changes foot every minute or so, which implies significant burn through repetition. Since then the burden is on the right leg, with 140 performed hits per minute, compared to the 130 with the left makes for an overall rate of nearly 30 thousand hits, ” the coach said, satisfied with what this effort means.

“It is true he ends exhausted, but this modality and controlling with thighs only is a preparation to attempt the record for more than 24 hours dominating the ball using all the body. It is a goal we have in mind for about three years and we want to complete it in 2014, although we know that doing this is to increase the body volume a little to withstand wear because he can lose in the attempt seven to eight kilos ” the coach said.

Erick shows no fear and considers it a debt to all his followers to get that record, for which he must have a unique balance between the physical and psychological component.

Of Enterprises, Lucas and other demons…