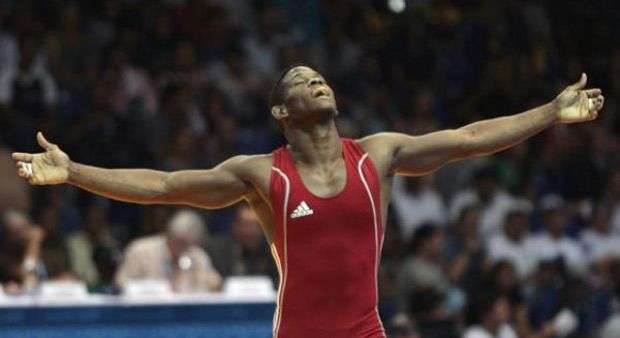 As splendid we can describe Cuba’s debut in the Wrestling World Championship, which opened today in Budapest, Hungary with discussions of medals in 55-66 and 96 kg of the freestyle. Our sole representative of the day, the Olympic bronze medalist (London 2012) and world (Istanbul, 2011), Livan Lopez Azcuy gave continuity to the string of great results and improved a seat on the podium to get the silver medal in the 66 kilos . At 31 years, this mighty gladiator, confirmed to be living the prime of his athletic career to the delight of all fans of the sport.

On his way to the final Livan had to fight five times. In the first three he left on the road representatives of “slanted eyes”. The premiere was a 4-0 over Vietnamese Anh Tuan Bui; thereupon he beat, also by points, Takahiro Inoue, and in the second round he got rid of the difficult North Korean Kang Jin Hyok, this time 5-0, ensuring his inclusion in the eight best in the division.

On his way to the gold his opponent was the fifth highest ranked in the world, Mongolian Ganzorig Mandakhnaran. Result: 3-1 in the Cuban’s favor and another Asian nation will probably declare the wrestler persona “non grata”.

The final bout was the only insurmountable obstacle in mattresses to Livan in the Lazlo Papp Sports Palace. His opponent, Armenian Devid Safaryan, was ranking second in the wporld. The fight ended by points 3-1.

If in the last Olympics he added a spectacular closing to the Cuban participation with a bronze medal, this time opens with a silver medal commendable the way of national struggle in this fight. Congratulations on behalf of the readers of Oncuba for him and his entire technical group.

This Worlds has just begun on Magyar lands, set a record of over 700 gladiators from 92 countries. On our island will compete in the freestyle, in addition to Lopez, Alejandro Valdes (60kg), Yunierki Blanco (74kg) and Reineris “the gymnast” Salas (84kg). We will also have representation in the Greco-Roman style and among girls. Oncuba will monitor the actions of the Cuban team in this event which will run through September 22.