In the year’s summit event, the discus thrower from Santiago proved to be at the height of the circumstances and won with a shot of 69.17 meters in the next to last round. After this success, Yaimé faces the Olympic challenge with more ambition. 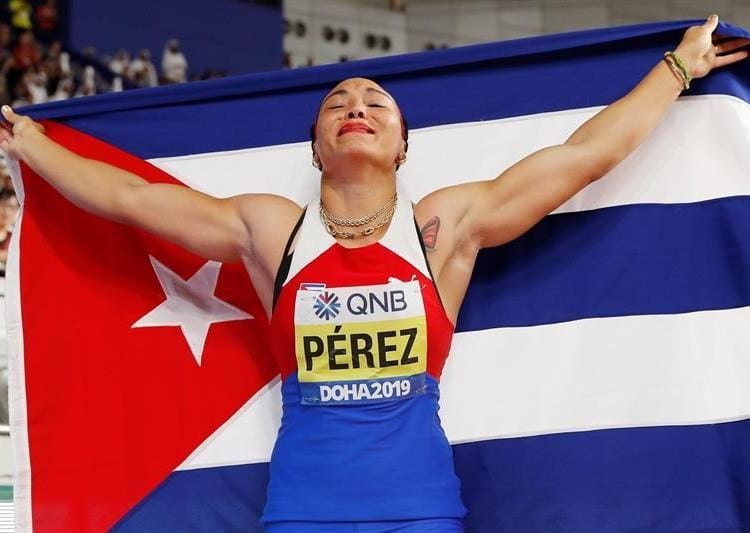 All the mysteries behind the great competitions and their protagonists are unimaginable to us. Sometimes, an injury, last-minute family losses or the most unthinkable stress out of the sports arena take out of circulation an athlete with the possibility of achieving a good result.

The saddest thing is that these issues are not thought of too much when the athlete is defeated. Fans usually only care about who wins, without looking at the various factors that influence the outcome of each event.

In the World Athletics Championship in Doha, for example, if discus thrower Yaimé Pérez had a bad result, the instinct of the Cuban fan would be to criticize her, to question why she did not achieve her best mark in the summit event of the year. Few, in the first instance, would have wondered if the Santiago athlete had a problem.

And it turns out that Yaimé did go through a limiting situation, a back condition that was about to deprive her of participating in the Qatari world championship, where all the forecasts placed her as a favorite to climb to the top of the podium.

“Three days ago I suffered an injury, I thought I would not recover,” said Yaimé tearfully to colleague Eyleen Ríos, shortly after impressing the world with a successful shot of 69.17 meters, achieved in the next to last attempt, almost when it was time to close the event.

“I want to thank physiotherapist Abdel Murguía, he helped me a lot in the recovery. Without his support none of this would be possible. That’s why I ran to the stands to hug him when the competition ended,” added the undaunted athlete, who reaffirmed herself as the undisputed queen of the discus throw in 2019, ahead of the also Cuban Denia Caballero and the stellar Croatian Sandra Perkovic.

Yaimé came out on another hot night at Khalifa International Stadium, where she stamped a resounding 68.10 on her first attempt. With that distance she was the leader until the fourth round, when Caballero, Olympic bronze in Rio 2016 and world champion in Beijing 2015, achieved 68.44 and climbed to the top.

“I knew I could achieve a better shot than that. I was not working technically well and my coach (Hilda Elisa Ramos) told me to rotate and raise the hip and the discus. I concentrated and the shot came out,” explained Pérez, who closes a glorious year, with the titles of the Pan American Games and the Diamond League.

Behind Yaimé came Denia, about whom there were multiple doubts after her poor performance in the Lima Pan American Games, where she finished with a discreet 60.46 (fourth position).

“In Lima I don’t know what happened to me. Now I concentrated more and at all times I had in mind that I could do it,” specified Denia, who did not hesitate to ensure that the rivalry with Yaimé Pérez has kept the Cuban discus throw alive.

The unprecedented 1-2 of the Cubans and the performance of the multi-title holder Croatian Sandra Perkovic (third with 66.72 and three fouls in the final rounds), opens a huge window of optimism for the Tokyo Olympics, where Yaimé and Denia will come out again among the most genuine candidates for the podium.

In the other important result for Cuba on the last-to-last day of the World Athletics Championship, high jumper Luis Enrique Zayas repeated the 2.30-meter mark achieved in the 2019 Lima Games, but it was not enough to get to the podium.

“I am super happy with what I did, I have shown that I can do stable jumps of over 2.30. It has been a privilege to compete with elite people like Barshim, a star that we must continue to work to surpass,” said Zayas, one of the great revelations of Cuban sports in 2019.

Ernesto Daranas: "I’ve never been censored, but it has happened to many people"

Necessary reforms in Cuba: from a centrally directed economy to a regulated market