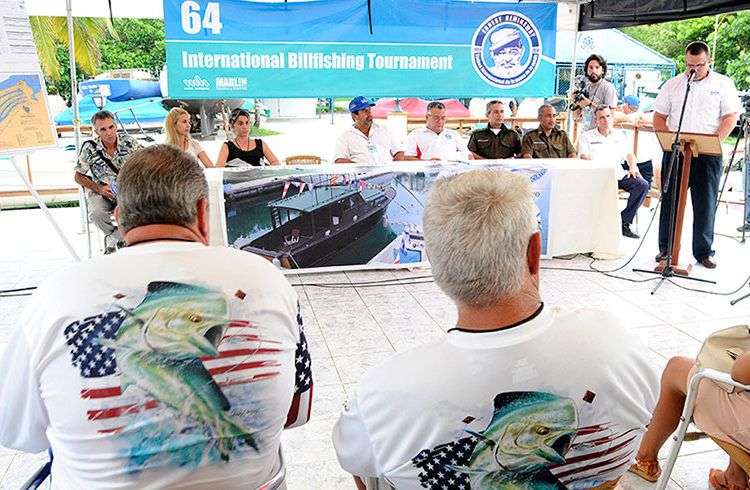 A couple of firsts mark the 64th International Fishing Tournament of Ernest Hemingway that began Monday in Havana: finally, in more than two decades, a Cuban team is participating in the tournament; and after 12 years of vetoes, a group of Americans obtained the licenses from their government to compete.

The Cuban team is made up by three brothers who fish for family tradition. The Santy, who are accompanied by a couple of friends, have a boat that goes out daily to the sea and is responsible for providing fresh fish to a restaurant specializing in Japanese food; and so, because they have “experience in the fishing area, and possibility of fresh bait … is that we think we will get a good place,” they said casually to OnCuba.

Instead, the Americans, a group of merry and mature men, tell us in the voice of Antonio Zamora-Cuban-American lawyer who loves the sea that “the last license was given to Americans to participate in the tournament was in 2002 or 2003 when 20 or 30 American ships participated. But that stopped with the Bush administration. ”

Of the 130 American fishermen approved, only 13 attend the tournament due to the inability to bring their boats, he said.

Zamora explained that the process to come is complicated, because due to the blockade, “the request goes to 3 U.S. departments (Treasury, OFAC, State and Commerce, which is the one approving the boats to come). They were approved by the first two, but we could not bring the boat by delays in processing. ”

Still Zamora believes that next year will again leave and may bring the boats to fish marlins, as Hemingway did in “El Pilar”.

For these first times in a long time, Commodore José Miguel Díaz Escrich looked elated at the microphone, as he opened the tournament. Therefore, he further added: “Now together, we will do our best this year for the Departments of Treasury, Commerce and State allow American ships to come to Cuba to compete in this great celebration.”

And he said, regarding the national team, that by 2015 they will have “to achieve no less than 15 teams representing Cuban fishermen from Jaimanita, Santa Fe, Cojimar, Santa Cruz del Norte, Baracoa, to make the party as Hemingway conceived it, as Cubans conceived it, as a fishing party in Cuba, inviting friends around the world. ”

According to the schedule of the tournament, on Tuesday, from 7 in the morning, all vessels will go fishing in different areas of the coast of Havana. Among the participants there are 63 fishermen from 10 different countries: Canada, France, England, Italy, Mexico, Latvia, Sweden, United States, Cayman Islands and Cuba.

As from 1997, the fishing will be in the form of tag and release which will preserve the protected species of marlins, and the capture zones are framed between Banes and Santa Cruz rivers.

The Santy brothers and his friends used to fish in one of the best areas included in the event, between the Morro and Cojimar, have faith in good results, this time not to serve fresh fish at a restaurant, but to honor the first time Cubans competing in this international event.

Meanwhile, Antonio Zamora, who in the 1970s was an officer in the U.S. Navy, said he was not a fisherman, “and will go out to fish, but if someone wants to fish I’ll leave. I like eating fish, yes. ”

For now, and since early the event to honor Hemingway with his name will fulfill the Commodore Escrich´s exhortation to be “faithful to the rules and solidarity with the other participants” in Marlin Fishing .

US Triangle Choral Exchange to perform in Cuba