aliet
in Technologies of Communication and Media
0 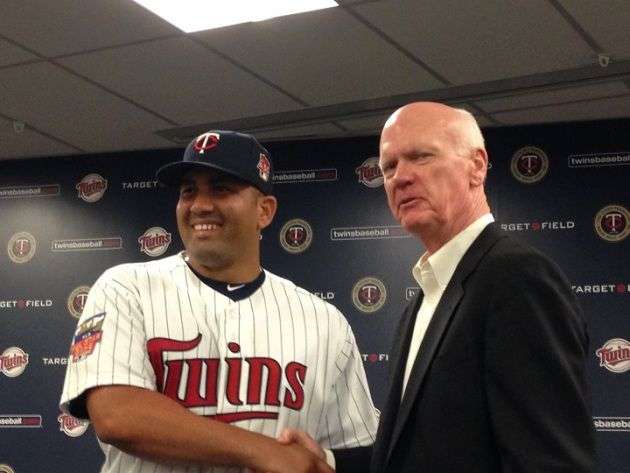 After a long winter and much of spring waiting for a call that made his day, finally the Cuban ballplayer Kendrys Morales picked up the phone and heard the phrase cherished by any player who is unemployed “you can now return to the field, the Twins want you fly to Minnesota. ”

Across the line spoke Scott Boras, perhaps the most prominent agent in the baseball universe that year after year gets lavish contracts for his players, but could not convince any of the 30 major league franchises to sign Kendrys, a husky first baseman and prominent designated hitter.

The Cuban native of Fomento, Sancti Spiritus, in a hurry, packed up and arrived after a long trip north in Minnesota, almost in Canada, to be presented by his new team, his third in his journey through the majors.

Beside him in the conference room of the Target Field, were Ron Gardenhire, manager of the Twins, bullpen coach Bobby Cuellar, who served as interpreter, and Terry Ryan, general manager of the team that is currently at the bottom of the Central Division of the American League, though not too separated from the leaders (Detroit Tigers).

Ryan, one of the main makers of the signing of Morales, confirmed the importance of adding Kendrys, as he provides offensive power, which right now is much needed if they want to break their streak of three straight seasons with more than 95 losses.

“It’s a good day for the organization. Now we have Kendrys, which gives us dynamite to the center of the lineup, something we were looking for without being any secretive. At the end we made it, and with a man who has experience in the American League, who knows pitching and can hit the ball hard, “Ryan explained to the media.

Similarly, Joe Mauer, undisputed leader of the franchise, was excited by the arrival of Morales, and did not hide his joy at having a hitter to help them win immediately, now that still have real possibilities to reach the leaders of the Central Division.

Meanwhile, the Cuban, who posed with the number 17 in the Twins pinstripes said that during the past seven months he has trained in the Boras Sports Institute, in Florida, in order to stay in shape while waiting a call to get him out of unemployment, after neither team wanted to lose their first-round pick in the draft, just staged the Thursday of the previous week.

Undoubtedly, the consummation of the draft was the key to unlock the signing of Morales, who by not accepting an offer by the Seattle Mariners at the end of last season was full of mercy dire need of a team bid, that one that never appeared on the market.

“It has not been easy for a baseball player watching the ball games when you know that he can play. So you have to be mentally strong and be prepared for when it comes that time, you’re ready to do it and do it, “said Kendrys, who has worked in recent months to work six days a week catching grounders, hitting in the batting cage and doing conditioning exercises.

Perhaps for that reason, in its debut he reached base twice in four plate appearances on Monday against Toronto, when he faced the knuckleballer RA Dickey, who won the Cy Young Award two years ago in the National League.

In his first two at-bats he struck out once and hit a grounder to shortstop, but later negotiated a walk and in the epilogue of the game-won by Toronto-he shot a drive line to right, enough arguments to win the job of playing starter as designated hitter plus gain confidence in his new home.

“It’s a beautiful city, very clean. I like the stadium and the atmosphere that exists here, no doubt, is an excellent place to start the season, ” the Cuban said, who earn little more than $ 7.4 million for the remainder of the campaign before becoming free agent.

Precisely because this detail Twins bet makes sense, since Kendrys urgently needed to show his credentials with a good campaign, in order to reach a good position in the winter market when he no longer be tied to any draft pick and can negotiate more freely a multiyear contract.

If it does he will guarantee at least a portion of the final stretch of his career in the majors, presumably in some team of the American League, because in the long run options will decrease and his chances of defending the first base, and he would be confined to be designated batter, a suitable role for him, as one would have to focus his preparation on the offensive, where he has traditionally stood out.

US Triangle Choral Exchange to perform in Cuba