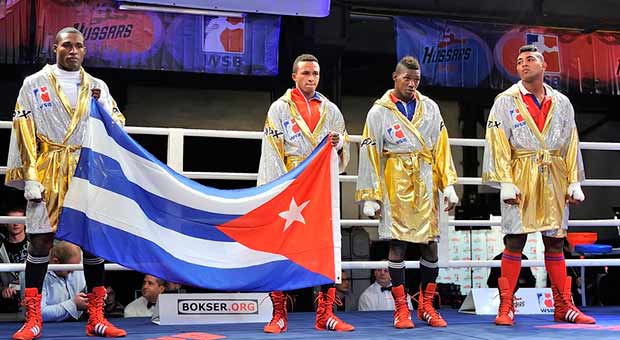 In its last match in the group stage of the IV World Series of Boxing, the Domadores lost the undefeated condition brought from the previous nine presentations. The Cuban team lost on Wednesday (2-3 ) during its visit to the Moscow Arena in the Russian capital. The setback had no impact on the Cuban leadership in poule B, since it had already secured that position in the previous match against Baku Fires.

The scene was ready for the quarter-final match in which the franchise will face the USA Knockouts in two matches that Miami will host on March 28 and Havana on April 4, respectively. This pairing somehow revives bilateral those matches that occurred between amateur teams from both countries during the seventies and early nineties of the last century. It will also be the return of a Cuban Olympic squad to American soil after nearly fifteen years of absence. The last time it was there was in 1999 when Houston hosted the world championship.

This upcoming meeting has another detail that helps to increase the attention of the boxing universe: the current head coach of the USA Knockouts is the Cuban Pedro Roque. “Peter” was for many years the architect of the triumphs of the fighters of the island in the youth category. Also in 2008 he led the senior squad that won 4 silver and the same number of medals bronze in the summer event in Beijing, performance that earned him the award of best coach in the world that season from AIBA. After ceasing to hold office in front of the Olympic team he migrated to Mexico, and then moved to the United States.

The first match is scheduled to take place at the American Airlines Arena, home of the Miami Heat in the NBA. There boxers belonging to the 49kg, 56kg, 64kg, 75kg and 91kg divisions will take the ring. In the latter category the presence of Guantanamo Erislandy Savon , nephew of the legendary Felix, is rasing a lot of expectation. Savon is recognized as the best fighter of the IV World Series to date, thanks to his 5 wins in as many matches, three of them by TKO.

Expectations in the city of Florida have been on the increase among boxing fans, so a full house for this historic evening are expected. OnCuba spoke via Internet with several members of the Cuban boxing family that currently reside in U.S. territory, and they gave us their impressions about the importance of this match.

Pedro Diaz (coach of Guillermo Rigondeaux ) : I trust it will be a match where you will see two nations with a great history in Olympic boxing . It will be a match to remember in which both teams come well prepared and actions in the ring will leave fans very happy.

Rancés Barthelemí (19-0-0 in professional boxing): The truth is that it hurts not being able to attend and support my people. It is impossible because at the moment I’m living in Las Vegas, but my energies are all the time with the Cuba Domadores.

Willie Suarez (team of Yuriorkis Gamboa): Yuri is going and is very pleased to see the current Cuban Olympic squad coming to fight here in Miami. I also know that Rigondeaux is keen to attend. In my case I will do my best not to miss this historic match, in fact I’m trying to cancel work commitments I have for that date. I have no doubt that the Miami Heat areana will be filled.

Alexei Collado (18-0-0) I have agreed a fight next month and for that date I might be immersed in the preparation in Las Vegas. Now, If I were in Miami, I’ll be there for sure for what undoubtedly will result in a memorable match.

The Domadores come to this match after leading comfortably the group B of the Fourth World Series. They finished the qualifying stage with 28 points and balance of 41 wins and only 9 defeats (82% effectiveness). They triumphed in all but the last duels against the Russian team. In Ciudad Deportiva they won 23 of the 25 bouts contested and swept four of rival franchises. In the global they surpassed Mexico and Poland in the ten bouts and the results were also favorable against Kazakhstan (8-2 ), Russia ( 7-3) and Azerbaijan ( 6-4).

In the loss (2-3 ) against Russia on Wednesday Pinar del Rio Lázaro Álvarez (60kg ) won by TKO in the second assault against Adlan Abdurashidov and Arisnoidys Despaigne (69kg ) , defeated unanimously 3-0 Andrei Zamkovoi. Meanwhile, Gerardo Cervantes (52kg) fell by TKO in the fourth round against Bakhtovar Nazirov ; Julio Cesar la Curz (81kg ) lost 1-2 to Nikita Ivanov , in a quite controversial decision , and the super heavyweight Yohandi Toirac ( +91 kg ) gave in 0-3 against Maxim Babanin .