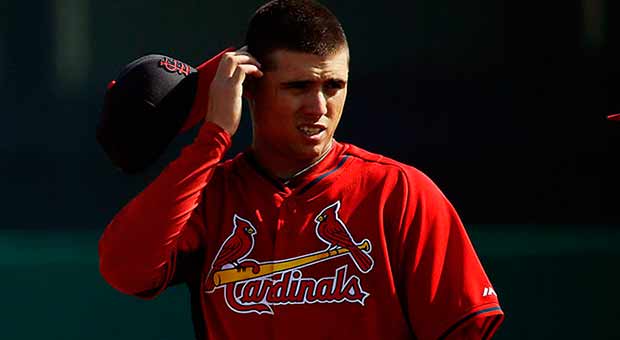 Outside of spring training camp of the St. Louis Cardinals in Jupiter, Florida, a few meters from the grass of the Roger Dean Stadium, the Cuban shortstop Aledmys Diaz Serrano was introduced by his organization, which last October lost the World Series against Boston.

Aledmys, with the number 95 on the back, surrounded by a dozen journalists, thanked the Cardinals, praised the tradition of the team and could not hide the desire to share training with two of his idols: the Puerto Rican catcher Yadier Molina and portentous outfielder Matt Holliday.

In his initial practices wearing the Cardinals shirt, he spoke with Coach Jose Oquendo near second base, made some swings in the batting cage and took some grounders at shortstop, all with astonishing naturalness, which greatly pleased the San Luis leaders.

“I think he did a lot of things right and knows the game well,” manager Mike Matheny, who honored and praised the Cuban’s tools, said, whose claims go through consolidation in the majors as a shortstop like his compatriots Alexei Ramirez ( Chicago White Sox), Yunel Escobar (Tampa Bay), Jose Iglesias (Detroit Tigers) and Adeiny Hechevarría (Miami Marlins).

However, this path looks anything but simple, since several talent evaluators have released their preliminary verdicts on the Villa Clara player and there were divided opinions regarding his ability to play the short field with a first-class team like the Cardinals.

Logically, the management has shown admiration for the 23 year old Cuban with experience in five seasons in the Cuban baseball.

“We have been following Aledmys for quite some time. His signing nature marks an important reference point for the Cardinals in the international arena, and we are pleased to have reached this agreement, “general manager John Mozeliak said.

“We made a very conscious analysis over the last year to understand the Cuban market, to understand how we could put our fingerprints on this. We aim for an infielder because that’s what we need to improve our organization, ” Mozeliak said.

Meanwhile, Matheny said “he is not only one of the raw talents. He is a guy that has been well taught. This guy seems to understand the game. “

In turn, analyst Derrick Goold of the St. Louis Post -Dispatch wrote that Diaz will have the opportunity, at an early stage, to learn and excel in other infield positions, in addition to becoming a bench collaborator when he achieves the leap the majors, because it is a fact that the first steps will be in one of Saint Louis subsidiaries

“We intend to be patient with him. He has not played baseball competitively in over a year and a half. We are not looking for him to leave immediate prints in the majors; we intend to give him more time to develop. From the organizational point of view is a great fit for us right now, because we always try to add depth, ” Mozeliak said.

However, a team like the Cardinals, with one of the farm systems better nourished in the MLB has gone out looking for talent outside the organization has attracted many comments and some misgivings about the ability of the chosen ones, in this case Aledmys.

Renowned scout Kiley McDaniel released a report projecting him as a batsman above average (between 260 and 280), capable of hitting many low drives, instincts enough to steal 15 to 20 bases, but acknowledged that due to his defense, it is prudent to take him away from shortstop and give him more options at second base.

“He could play at shortstop in a pinch, which gives value to the clubs who think his bat is not enough to begin with, but his arm strength is average (slightly below for the throw from the hole) scope and range is not enough to cover the shortage of power in the shots, ” McDaniel wrote in the Scout.com website.

Meanwhile, the experienced analyst Peter Bjarkman, well-versed in Cuban baseball, said he does not see him with strong chances of reaching the majors. “He may get there, but I think it will be a Double-A player, or maybe a Mexican league player. That is a view that was also shared by the vast majority of MLB scouts who chatted in Haarlem in 2012, when he left the Cuban team. “

He adds: “He is strong, with knowledge of the sport, you cannot deny that, but appears to lack the physical tools or enough time to play in a major league infield reaction. He is probably more parallel with Juan Carlos Linares as a hitter in the Red Sox, who has impressed in the minors in Boston, but has never been able to take the final step. (Leslie Anderson was also a much stronger prospect certainly a better hitter; he did not make the top grade with Tampa Bay). “

A LOOK TO THE FUTURE

Anybody watching these professional reports would not hesitate to veto the future of Aledmys Diaz in the majors, but the Cuban has fulfilled a dream and is poised to continue climbing to reach as high as possible.

“I consider myself a pretty complete player. I like to do three things in baseball well. I have to hit hard, I can also do it for average and I think the defense has improved a lot in recent times. I know that here I will improve a lot with work every day, “Aledmys said.

“This is a dream that I came to achieve and with the help of God I’m here. I am very happy about that, to reach a major league team. From now on is a new beginning and I ‘m going to give one hundred percent to try to go as fast as possible to the highest level. My family is very happy with the decision I made and I are waiting for what will happen from here on in my career, they are supporting me a lot psychologically , “he added .

It is a fact that Aledmys will begin his career in the United States in the minors, since the Cardinals have covered the infield with Matt Carpenter, Johnny Peralta and Kolten Wong. But signing Aledmys for an amount of money that is not too outlandish (some report that the contract is for four years and eight million), St Louis found, meanwhile, a replacement for Daniel Descalso, utility of the team, and a guarantee to meet the aging Peralta and a probable contributor to one of the most productive lineups in baseball .

Aledmys still need a work visa, that’s why he traveled to Mexico (there he has established his residence) in the coming days to resolve the last fringes of the permit, which will allow his debut in a preseason game, either with the Cardinals or a subsidiary in the minors.