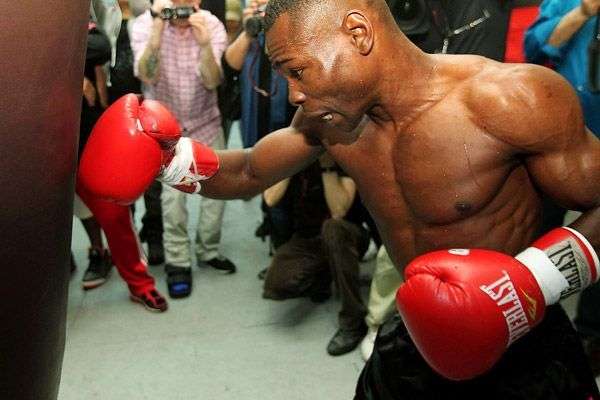 December 31 is a day of celebration. For Cuba is synonymous with rum and beer, pork and much pigskin, dominoes with friends and family. But that December 31 was not like that, not even close for “The Jackal”, Guillermo Rigondeaux (15-0, 10 KOs). Far from his native Santiago de Cuba, his conga, his Creole ajiaco was he, willing to show his talent. Even far removed from the United States, where today he has his lair.

The champion at 122 pounds would defend his Super Bantamweight World Boxing Organization (WBO) and World Association (WBA) title just hours shy of 2015 and although there were hallmarks he reached the new year with a smile from ear to ear .

His rival, the Japanese Hisashi Amagasa (28-5-2, 19), home moreover, was not a novel, rather an old fox with aspirations and pretensions of grandeur. Accustomed to make his and use his tricks at 126, put the Cuban in serious, but serious difficulties at the beginning because of his greater scope and size. Not forgetting (that is stronger) than in weighing he had the same pounds (121.4) and as for fight night he was at 141. Abysmal difference.

Notwithstanding all this, one of the news is that Rigondeaux recovered from two knockdowns in the seventh round of this match that took place in Osaka. The transcendental is that he fell, not that he rose, of course.

The knockdowns increased the mood (or moral) of the king, and he did not abandon his riposte, “hit and not to hit” and started exchanging. Moments that reminded the boxer who won the 54 kg division at the Olympic Games in Sydney and Athens and was an intractable in its heyday as an amateur.

Otherwise, the Japanese fought and did not elude the offer. That was it for him. He failed. The train was unstoppable in the short distance, into his opponent’s guard, head to head, shoe to shoe, and the fire was there, merciless. The scuffle was serious.

For the tenth assault, Amagasa kissed the matt after receiving a left hook, while the eleventh his face was already a bunch of bruises and his right eye was cut. The bell rang, as always a kind of savior. A minute later, no towels on the floor or anything, because the Japanese are brave and proud, just like the Cubans, the Asian removed his gloves. His corner stunned his fate and didn’t let him go to the last period. TKO victory that leaves in “Rigo” waist the belt of the category.

After the resounding success he did not stop, and returned to shout to the four winds the name of the Mexican Leo Santa Cruz (28-0, 16) as his next opponent to leave very clearly who the boss and runs the “chu chu chu” between the exponents of super bantamweight.

Happy ending to a traumatic and full of shocks for Rigondeaux year. Not able to celebrate Christmas as one would think, to train hard in search of giving his arsenal of combinations. Well, as they say the year begins culminates as the previous year, surely hope that Santa Claus gratifies the Antillean in the months ahead.

The Letter of the Year from inside