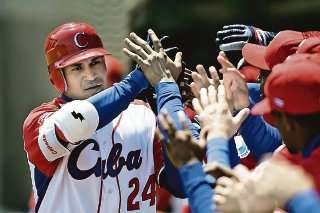 With Yulieski Gourriel and Frederich Cepeda, veterans of the two previous editions, and the absence of Rusney Castillo, the 28-man strong baseball team that will represent Cuba in the III World Baseball Classic, scheduled to run on March 2-19, was announced today at noon.

This Wednesday Higinio Velez, president of the Cuban Federation of Baseball, flanked by Victor Mesa, team manager, and Jorge Fuentes, Chief Technical Officer, announced the squad, from a group of 36 players that were training in the Latinoamericano Stadium in Havana.

The eight sections remain training in Havana to Roger Machado orders, DT champions of the country, Ciego Avila, to cover a supposed drop by drop in performance or discipline of the elect.

The eight players left out will stay training in Havana under Roger Machado orders, Ciego de Avila manager, to be able to enter the team in case of the chosen wants enters a slump of commits an act of indiscipline.

This is the case of pitchers Yasmani Hernandez Romero, Darien Nunez and Juan Carlos Viera, and Yulexis la Rosa, Yordan Manduley, Yadier Hernandez, Stayler Hernandez and Castillo, the latter considered one of the best players of Cuba but, according to Victor Mesa, far now from his best shape.

Until February 20, the Cuban Federation can enter changes to the roster, which is the result a selection process that included over 70 baseball players cited at the end of the 51 National Baseball season and that in several groups, met the international commitments last summer.

This Thursday the Cuban team will received the flag hours before leaving for Taipei of China, where it will begin a phase of adaptation to the ball of the Classic, plus performing a training base.

There Cubans will play against professional teams in the country and from Netherlands on February 18, 19, 21, 22 and 24, and then they will move to Japan to face Japanese squads on February 27 and March 1.

Cuba, located in Group A, debuts on March 3 against Brazil, a day after will face China, and on March 6 in Fukuoka as in the two previous challenges, they will play Japan, winner of the first two editions of this competition.

Of being among the top two in this instance, they will travel to Tokyo where, as of March 8, they will play the second against the two best teams in Group B which includes the teams of South Korea, Chinese Taipei, Netherlands and Australia.

In the semifinal, scheduled for San Francisco, California, if Cuba advances will play against the two teams that win the other semifinal of Groups C (Venezuela, Dominican Republic, Puerto Rico and Spain) and D (United States, Canada, Mexico and Italy).

Eleven artists … that will not be the last ones …

The fate of the last Morenas

The fate of the last Morenas