Cuban Baseball: National Series to kick off in November 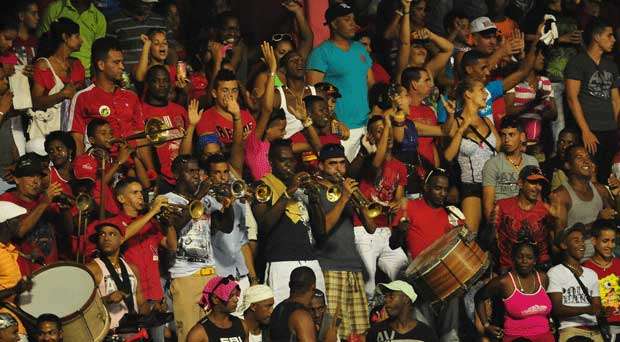 After several days of speculations on the beginning of the 53 National Series it is already known that it will begin on November 3rd, a somehow unexpected date, since last year it was decided that the first fortnight of October was the ideal time to hear the longed “play ball”

However, a remarkable collaboration between CITMA, the Institute of Meteorology and the Baseball Commission has made the latest come to agree on the need to move further up in the year the starting date due to the high possibilities of rains and hurricanes forecast for next month.

It is worth praising whoever came out with the idea, since worldwide is of upmost importance the connection among these entities with the event’s organizers, something that we in Cuba have obviously waited for too long.

We will never forget the tortuous playoff two years ago between Industriales and Ciego de Avila that despite ending in just 5 games took almost two weeks to complete; something similar to what happened during the last match for the title between Villa Clara and Matanzas

These reasons, as well as multiple games postponed over our National Series, were loudly demanding the use of meteorology specialists who were able to warn the National Commission on the seasons of frequent rains and thunderstorms.

Now, speaking of purely sporting issues, this announcement does not change too much the Cuban baseball’s immediate fate, at least not at first. I explain myself.

According to Christian Jimenez, president of INDER, all managers have to present their rosters by October 1, the date set for the start of the series until it was changed by the warnings of the meteorologists.

This means that in just two weeks the 16 teams involved in the fight would be able to face the competition, but now they must change considerably their projections, since they have an extra month, which, in terms of high performance sport, has a remarkable meaning.

Therefore, the question remains how the mentors will fill the gap of a month without competition because training is a supplement to certain extent for this deficit, but not quite, and the matches of confrontation between the provinces are not all easy, because sometimes involve transportation and accommodation, resulting in costs not covered in the budget.

In such circumstances, beating a dead horse makes no sense, rather we should thank for the emerging collaboration between the agencies mentioned above, but (I hate that there is always a but) they could have easily projected with greater responsibility so momentous a time as the beginning the main sport in the country, in the air and no fixed date for a long time.
Moreover, the Series will be identical to last year’s, with the same inefficient 45 games in the first stage, to be followed by a second round of 42 games with 8 qualified teams reinforced, out of which the champion will emerge.

The only difference is that there will be a second category; a wise decision in my opinion, for a tournament of such a low level, that without  public following it made ​​no sense, plus the need to use the capital in truly essential issues.

In this sense, acceptable is  the idea of ​​giving life to a National Championship U23, a perfect setting to develop young talent, but (I hate that there is always a but) during the months of August and September, as we have seen recently, have been well loaded will rain.

Within this panorama, it emerged that also exists in the classic first category calendar a break from January 30 to February 10 for the participation of Villa Clara in the Caribbean Series, an unequivocal sign that the hopes of reappearing in the professional fight despite rumors that set us more outside than inside by the provisions of the majors and the U.S. administration, are still alive.

Of course, to speak more clearly on the subject we will have to wait a few days, because while the Caribbean Confederation doesn’t sign its Winter Agreement with the Major Leagues is very difficult to include the issue of Cuba at the negotiating table, especially if we take into account the political nuances visible in the matter.

While we wait for good news, at least we know there will be ball in November.

The tribute to El Monte by Rosario Cárdenas

Of Enterprises, Lucas and other demons...