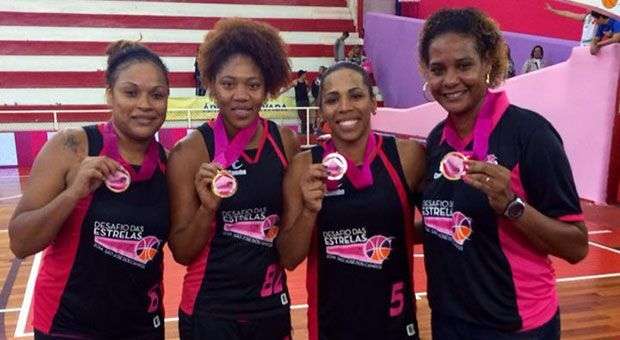 Four Cuban were protagonists of the first All-Star Game of women’s professional basketball in Brazil: Yakelin Plutin , Ariadna Capiró , Yulianne Cruz and Lisdeivis Víctores . The game took place as part of the celebrations for the International Women’s Day, at the ” Lineu de Moura ” arena in San Jose, and included a fitting tribute to the players who won the world title in 1994, and to several actions on the prevention of breast cancer .

The most important Brazilian players in this season competed on the court with a team of their foreign peers. In the latter team were the Cuban girls and Lisdeivis directed it. The match, closed from start to finish, ended with victory for the “foreigners” by 78-73 (36-40, first half). Plutin was the MVP of the game by scoring 20 points, 6 rebounds and 4 turnovers. Ariadne also shone: 11 points, 6 rebounds and 3 assists. For the local team the highest figures were for Erika de Souza and Jaqueline Silvestre, with 14 and 11 points, respectively.

It is worth noting that the foreigners’ team included besides the Cubans several American players ( all active in the WNBA), including the guard Briann Jolie , who has been called to the team that will represent the U.S. in the next world championship, in Turkey in September this year. A Serbian player and the Paraguayan Paola Ferrari completed the squad.

OnCuba spoke exclusively to Yakelin Plutin and Ariadne Capiró about this unforgettable day for basketball in Brazil, in which they were direct participants.

First edition of the All-Star in the league and the four of you were present in the court.

Ariadna – I felt very honored to participate in this first all-star game. The best part of the whole day was being able to play with my Cuban friends; we had so much fun on and off the court. It was a special moment because it was the first time that the three Cubans who are playing basketball here in Brazil play in the same team, and for our greater delight we were under the guidance of Lisdeivis . I confess I did not want the game to end, because it was a great experience.

Yakelin – This game was the first female All-star to be held in Brazil and being present was a special moment in my career. Being on the same team that the other Cubans was very pleasing. In a way we were reliving moments from past years. No doubt a great experience and since we won the game, it was even better!

Yakelin, you were the MVP of the match held in the court of your league team: the San Jose, though, I imagine that this time the crowd which gathered in the “Lineu de Moura” was supporting the entire time your rival.

Yakelin-I think this time the best about playing in San Jose was that I didn’t have to travel to another city as I hate traveling. Logically, since in the court we the foreigners were playing the Brazilians, the public was always with the latter. Being the most outstanding player of the game made me very happy because there the best basketball players in the league were gathered. In unison it allowed me confirm the good physical and mental state I am in, which it will be helpful now that we are heading to the playoffs.

It also was a special All-Star game, from the homage paid to the Brazilian team that was world champion in 1994.

Ariadne: it was a tribute to the 1994 World Champions something the Brazilian basketball needed for a long time. Usually sport has a short memory, so it is always merry when you witness acknowledgements like this. We, foreign players, were excited, because any of us would want to win a world title and the Brazilian national team, which we admire, deserved this gift.

Yakelin-I think that tribute was the best part of the all-star game. As someone who has been an athlete I can assess its importance to its full extent and how rewarding it is people value your work. Brazilian basketball, and in particular those players as Hortensia, Janeth and Leila Sobral, world champions twenty years ago, were missing a moment like that.

Photos: Courtesy of the interviewees