As of October, only a maximum of 1,000 dollars may be sent every three months. 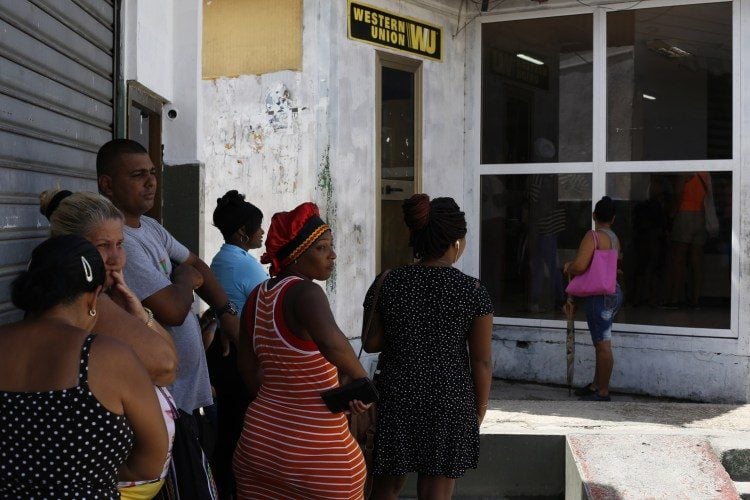 The U.S. government has restricted this Friday the sending of remittances to Cuba and banned donations of money and bank transfers to or from the island through U.S. banks, the Department of the Treasury reported.

As of next October, Cubans can only receive 1,000 dollars per quarter. In addition, the sending of remittances to senior government officials on the island and Communist Party members is still banned, a decision that has now been extended to all of their “close relatives.”

The press release does not specify what is understood for close relatives, but traditionally whenever the U.S. administrations have applied restrictions to Cubans and “close relatives” they include parents and children, and leave out others, including foster mothers, a fundamental pillar in Cuban society. For example, when President George W. Bush cut visas to Party members, he included close relatives such as parents and children, but when he authorized the sending of some remittances, although controlled, he left out grandchildren, nephews, cousins ​​and foster mothers, which at that time created a small uprising in the community in South Florida.

On the other hand, donations are prohibited, although remittances can be sent to some people and independent non-governmental organizations. The Office of Foreign Assets Control (OFAC) has added a permit authorizing this type of remittances to support the operation of the non-state sector’s economic activities by private workers in light of the policy to encourage the growth of the Cuban private sector independent of government control, the press release said.

The U.S. government has also banned bank transfers to or from Cuba with other banks through institutions under its jurisdiction, that is, if a European bank wants to transfer or receive money from Cuba through its branch in the United States as of now it won’t be able to do it, something that was already happening for fear of the implications of the economic embargo on the island.

The administration justifies the new measures in the framework of the strategy established by the Donald Trump administration to strengthen the Cuba policy defined in a memorandum in June 2017.

In addition, also as a measure of pressure for Havana’s support for the Caracas government, which the United States wants to oust from power. Secretary of the Treasury Steven Mnuchin explained in the release that they are taking these additional steps to financially isolate the Cuban regime, which according to the U.S. is responsible for the oppression of the Cuban people and the support of other dictatorships in the region such as the “illegitimate regime of (Venezuelan President, Nicolás) Maduro.”

The official emphasized that with these regulatory amendments, the Department of the Treasury intends to deny Cuba access to hard currency and that they were confirming the bad behavior of the Cuban government while they will continue supporting the suffering Cuban people.

This group of restrictions adds to the prohibition of cruise trips to Cuba, the strengthening of measures that limit Americans’ travel to the island, denying the granting of political asylum to Cubans who present themselves on the border with Mexico and the limiting of visas and residence permits within the framework of the immigration agreements.

These measures were advanced last April in Miami by National Security Advisor John Bolton. Today’s release barely confirms their establishment through OFAC. But even so it has surprised observers.

“First I was surprised because I thought it was old news and it really is a change in OFAC regulations that Bolton announced in April. Now what I did not expect was that remittances to private workers would be maintained because many of those self-employed persons have relations with the government or relatives in the government,” said Jorge Duany, director of the Cuban Research Institute of Florida International University.

That is why the academician believes that it will be very difficult for the U.S. government to monitor the compliance of these new restrictions. “The thing is that a series of categories are established that are confusing and that are going to be very difficult to put into practice,” said Duany, speaking about family connections in the non-state economic sector.

Even so, “and speaking plainly, it sounds very strong because of the problem of the economic crisis Cuba is experiencing and that now will be affected even more, taking into account other measures such as the elimination of cruise tourism, the needs of Cubans.”

Mnuchin’s announcement was received with concern by Engage Cuba, a coalition promoting the strengthening of ties with Cuba. For its president, James Williams, restricting the possibility that Cuban Americans can support their relatives and loved ones is cruel and counterproductive.

Williams emphasized that although they favor the exemption given to the self-employed and non-governmental organizations, the wider fact is that it strengthens a failed embargo and causes more pain and suffering to the average Cuban and that it is particularly devastating for Afro-Cubans who have less chance of having relatives in the United States, adding that this Friday’s announcement is another tragic chapter of the Trump administration’s inhuman policy toward Cuban families, as if it weren’t enough that the Trump administration is denying political asylum or deporting Cubans and not processing family reunification visas.

All this is taking place at a time when the Cuban government was analyzing the experiences that several countries have in managing their immigrants’ remittances, which is why every study in this sense takes on a pressing relevance. Although the majority have settled in the United States, Cubans are spread all over the world and are estimated to contribute between 1.5 and 3.6 billion annually.

These remittances are sent to their relatives who then use them to meet their basic needs with purchases in government-owned stores or private and cooperative establishments, and which later enter the national economy.

A recent analysis by the Inter Press Service agency states that “official sources admit that these remittances represent a ‘strong and important’ income for the economy and there is a space to channel them towards productive investments. They also recognize that this process includes the need to encourage the collection of remittances with a benefit for the holder.”

Apparently after the reestablishment of full diplomatic relations with the United States, when President Barack Obama lifted the limits on remittances―which was 1,000 dollars per quarter, as it will again be from now on―, remittances from the United States immediately amounted to 3.354 billion in 2015 and the following year reached 3.6 billion, said Cuban economist Armando Nova cited by the news agency.

A considerable sum that forces the government, he estimates, to create new mechanisms to make remittances profitable. The basic objectives would be infrastructure investments and economic growth. “One of the options that are considered is the creation of a bank fund for certain economic activities, state or private, with an attractive interest rate, which can be collected from time to time either by the shareholder himself or by a chosen relative,” says the story.

But there are other options, such as fully opening the doors of the domestic market to foreign capital, facilitating imports and their joint distribution. This should include the possibility that the private sector can import directly without going through state agencies, which always increases consumer prices. “It would be possible to channel the real cash income, received through remittances, in the economic development of the country,” Nova said to IPS.

A survey carried out in 2016 by the Center for Population Studies of the National Bureau of Statistics and Information of Cuba, showed that 77% of Cuban emigrants send, permanently or temporarily, some kind of help to their families and friends on the island. Which goes into the hands of 32% of Cubans living in their country.