Roger Federer, one of the most prize-winning tennis players in history, lived his last match this Friday, September 23 at the Laver Cup. 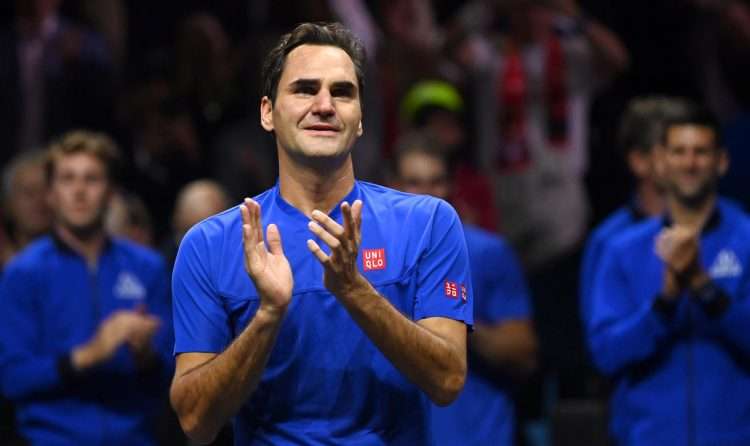 Roger Federer lived his farewell from the courts at the Laver Cup in London. Photo: Andy Rain/EFE

Federer is not a King. Calling him “His Majesty” is nonsense, even though he has the class of any noble. He declared himself “the enemy of war and the reverse of it, the medal.” He does not want to hold power, or crush anyone. He is not interested in showing power, speed, conquering land. If there is something he wants to conquer, it is souls. The soul of his rivals, of his friends. Twinkling souls, pensive souls, energetic souls, troubled souls, erratic and giddy souls, dagger souls, fluffy souls, souls like insomniac pistols,1 souls of various caliber on any court he goes to. The souls of the public.

Federer thanks the public when they revere him; he raises his arms toward the bleachers as humbly as any neighbor’s son. He doesn’t yell when he wins. He doesn’t scream when he loses. Only the left fist clenched to his chest.

He never played tennis with a racket. On his right he uses a brush with which he draws strokes to the lines. He has the sensitivity and genius of an artist. The anxiety of creation. He invented the surprise attack at the 2015 Cincinnati Open: during the opponent’s serve he would stand very close to the midfield line and bounce the opponent’s serve early. The ball fell behind the net. Baffling.

The Swiss can never be a King, perhaps an artist, and since I don’t really know what he is, I’ll just say that Roger Federer is a kind man.

Reina María Rodríguez wrote that everyone in Geneva knows where Borges’ house is, even if they don’t know the name of the Swiss president. In Munchenstein, everyone knows about the Schaulager, a former warehouse converted into a well-known art gallery by Swiss architects Herzog and De Meuron. But no one can say about the house where Federer lived as a child. There is no monument, no symbol dedicated to Roger. There is no street named after him, nor a plaque on the front of the house where he was born, nor even evidence of his passing through school.

Federer can be the president of Switzerland. His first surname and his name are in themselves a symbol, a monument, a street, the city, the entire country. And a little more.

May he be a God. The God of time. He was born in the land of the great watchmakers and dominated a sport where ― presumably ― points are scored following the quarter hour. It must be paradoxical, or to put it like Borges, it will be a truth that seems like a lie; but the Swiss displays a game in which time is erased.

“And no player is faster, or gives such a misleading impression of being effortless, than Roger Federer,” wrote David Foster Wallace in one of his books.

For the U.S. writer, he is one of those rare, preternatural athletes who appear to be exempt, at least in part, from certain physical laws:

“Good analogues here include Michael Jordan, who could not only jump inhumanly high but actually hang there a beat or two longer than gravity allows, and Muhammad Ali, who really could ‘float’ across the canvas and land two or three jabs in the clock-time required for one. There are probably a half-dozen other examples since 1960. And Federer is of this type — a type that one could call genius, or mutant, or avatar. He is never hurried or off-balance. The approaching ball hangs, for him, a split-second longer than it ought to. His movements are lithe rather than athletic.”

For Michel Contreras it was Michael Jordan who confirmed that God looks elegant in shorts.… And white ones, Federer added on the Wimbledon grass.

Therefore, the gods play in shorts and Roger does it with a different light, with a wise hand to reproduce a single long shadow on the court (we could call the beauty that covers the entire court this way). It’s pretty, that’s his game. Malleable, and the mold of it is that: the beauty contained in 24 meters of cement, clay or grass.

The minute hand seemed to move at the whim of his racket. In 2017, after six months of inactivity, he won the Australian Open at the age of 36 and became the oldest winner of a Grand Slam. He also holds the record for the oldest number one in the entire circuit and for the most consecutive weeks. It was the time in his time, regardless of the greatness of Nole or Nadal.

But if Achilles by his heel is Achilles, Federer by his knee is Tommy, Ismael or Alexander, he is not Roger. Perhaps a demigod.

Federer could be human, but his kinesthetics on a court cast serious doubt on that hypothesis. His name, almost a sentiment for tennis lovers. His backhand parallel to one hand, orgasmic: it is a challenge for the first dancer of any ballet company. He flows in the serve, in his patented cross smash, in his volleys. Nobody ever danced better tango with the net than the Swiss. If tennis is a dance for two, Federer made it for three.

According to Foster Wallace, seeing him on the track was like whistling Mozart during a Metallica concert. If we follow that ball, Roger would be an Ennio Morricone of tennis. The classic and the contemporary in the same (in)genius. Innate ability to generate multiple solutions. The mixture of old tennis and modern tennis. Finesse and subtlety in the face of physical play from the back of the court. The Federer moment against the Nadal impulse: “the passionate virility of the South of Europe against the intricate and clinical artistry of the North.”

He wanted to say goodbye this way, on the same side of the net of the man who prevented him from winning his sixth Wimbledon in a row, who defeated him in six Grand Slam finals, who pushed him to the limit. Nothing amazes him anymore, therefore nothing outrages him, he hates no one, he already assumes everything, he waits for everything, not even the 2019 Wimbledon final hurts him, he stones no one, he embraces everyone, he no longer aspires to anything, although some remnants remain from when he was human…

In the 2022 Laver Cup, both come out in ultramarine blue with a white headband. Jack Sock and Frances Tiafoe, the farewell rivals, wear red. It starts at the Federer net and on a forehand sneaks it through the gap between the post and the net. Rare point for the rest of the world.

He hasn’t played doubles since 2015. He hasn’t played officially for over a year. He’s flabby and his blow is flat like Nole’s abdomen, who’s looking at him from the bench. Rod Laver in the stands. Tennis has the luxury of having three living legends in London along with 17,000 fans. Papa Robert in the audience, also his mother, his wife Mirka and the pair of twins.

He stops Sock’s returned ball dead in its tracks with the backhand. Second serve. It is a delicatessen of the Swiss who still remembers using the racket. In his career he changed rackets 13 times. In the first set the Europeans broke with 5-4 up. In the second there will be a break per side and a tiebreak for the youngest. And to break the tie by 10 points, with the super tiebreaker.

Tiafoe walked across the field to greet Nadal, who narrowly returned a ball behind the net. The Helvetian is like out of coverage. He doesn’t get hooked up front. He draws the racket slowly but invents an ace to make it 6-5 in the super tiebreak.

7-6. Up for a low cross volley from the Swiss. Still the heavy hand and a shot that only he can execute. Tiafoe’s hard forehand hits Federer in the right arm. The public boos him and the Frenchman makes an unforced error.

9-8. Federer serves to win or to finish everything he started 24 years ago or his whole life. Sock and Tiafoe make three points in a row and give the second point to the rest of the world team in the Laver Cup.

Since the announcement of Federer’s farewell, everything has been so dramatic that there was no event that made it worse or better.

Nadal has the palm of his left hand on his jaw. He is shaken as if he was forever banned from doing his ritual before the serve. Two tears come out dedicated to the man who will ask what he had to do to win…

The records, the statistics, the comparisons are there, and then there is the metaphysics of the sport. Roger is tennis, although he is not all tennis. And people know it in the same way as Baudelaire knew it in the 19th century: “What has been created by the spirit is more alive than matter.”

Federer is the imaginary friend for those of us who never accompanied him live and couldn’t see him close up put his service ball in the V of the racket, nor throw his locks back; for those of us who used to get tachycardia to see him lose a tiebreak or leave a crosscourt backhand on the net; for those of us who live on this side of the world and had to wake up at four in the morning to keep up with him in Australia. Record or no record Federer moves mountains higher than the Alps like a King, like a God, like a president, like a common human being, like none of that or like Federer.

At the end he hugs the whole team. The first thing he says is that he is not sad about the result. His crying that makes you want to cry and keep crying. He can’t talk. He can’t. And then what the hell am I going to continue talking about in this chronicle.…