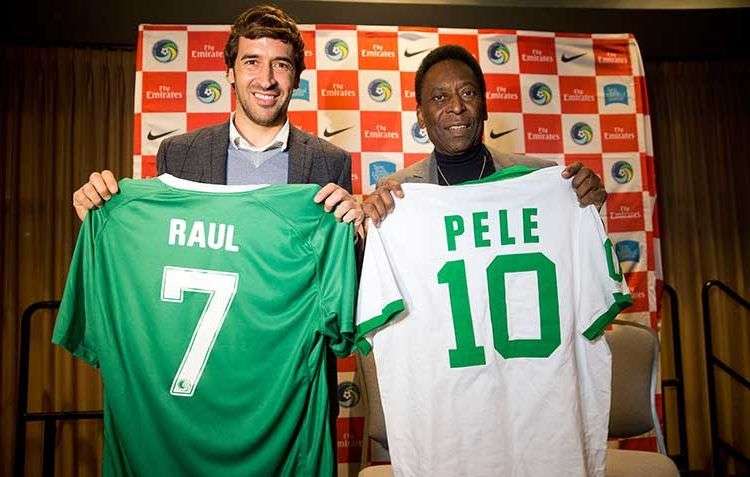 Since the World Cup in France 1938, Cuba had not been in the shutter of world soccer. Now it’s back and next June 2, Havana people can see the Cosmos, when the New York soccer club, which roster includes Spanish Raúl González and Marcos Senna, to face in a friendly match the Cuban national team.

The New York Cosmos belongs to the North American Soccer League (NASL) which is the lower division of the Major League Soccer (MLS) and they achieved worldwide fame in the seventies when its colors were defended by Edson Arantes do Nascimento (Pele), Franz Beckenbauer, Carlos Alberto and Johan Neeskens.

According to the official website ( http://www.nycosmos.com/) of the club, the squad will land in Havana next summer taking advantage of a break in the northern season and as part of the preparation of Cuba for the CONCACAF Gold Cup. In this way, they will become the first professional team from the United States in stepping Cuban soil after the beginning of the process for restoration of diplomatic relations between the two countries last December 17.

Then we publish three impressions, three exclusive statements, three people linked to Cuban soccer, three stories: a player who may be among those summoned to the match, a former member of the national team and a fan talk to OnCuba.

Miguel Angel Gandara does not like his training sessions to be interrupted. He does not even attend you when the 9 and 10 years-old kids are running in the Sports City soccer field. “I have to pay attention to them because if not, they get relaxed and think that running for getting higher physical capacity is an unimportant exercise. Children must begin training since early ages to create the habit on them, “he tells me without looking at me.

Gándara , known as “Mickey”, was during the nineties one of the most striking players in the country. He was a midfielder with an educated foot, vision, the orchestra man of the team from the capital, all the balls passed for his boots, the maestro who led the symphony which also included Bobadilla, Roldan and others. He was a playmaker who destroyed defenses with accurate p asses, the kind of payer that is now extinct in the country.

“The fact that professional teams to come to play against Cuba is a great achievement, the best thing that can happen to the Cuban soccer, in fact, its recession or i nability to develop, is mainly due to the absence of such international experience. ”

¿Did you play Marcos Senna´s role in the field? I asked him.

“I did it positionally, especially in the end of my career, but I had more skills as creator. Senna is rather the destroyer, the kind of player doing the dirty work, but he also has good shot and game vision. ” And Raul?, another question. “That’s a monster; he is tired of scoring goals in Europe, in the World. We will have the pleasure of one of the greatest players of Real Madrid to play in Cuba while still active as a player. ”

Andy Baquero already participated in a World Cup; he attended the U-20 2013 edition with the Cuban team in Turkey. There they were eliminated in the first round, did not pass the exam, but they had a decent performance and left good feelings in the field. Baquero was also part of the squad that reached the bronze medal in the Central American Games of Veracruz. You could say without fear of being wrong, that his generation has been one of the most successful and talented in the last two decades in Cuba.

Andy’s a defender and plays mainly as right back, although sometimes the national team has used him also as left back. His greatest talent is his physical condition, his ability to reach attacking positions and then go back to give a hand in defense. He will possibly be one of those summoned in the list of the squad that will face in friendly match the New York Cosmos.

“It would be a great honor to be part of that team, it will be a historic match and all players want to be there. Many of the best players in the history of world soccer have played in the Cosmos since Pele and Beckenbauer until now they have Raul, another famous player. ”

Baquero, is a fan of Real Madrid and if his inclusion in the team that will face the Cosmos gets materialized, he will share field with one of the icons of the merengue club. “It would be a fabulous thing I would have never imagined, that game will put us in the sight of the universe, we must train hard to give the best image. Beyond that it is a friendly match, we want to win and show that we can face professional players. ”

Andy Baquero seems to be included in Cuba’s national team roster that will face the New York Cosmos.

Roy Hernandez did not want to believe me. He thinks I’m cheating, that I went to his home only to look for the soccer ball because it’s time to cross the fence of Fructuoso Rodriguez high school, in Vedado neighborhood, and get into the courtyard and place on the cement court the goals made from school desks.

Roy is 28 years old and these evenings are all he has. He waits for them all day, all night. He does nothing else, does not think about anything else, only in wearing one of his Real Madrid jerseys, cordon off a pair of old Adidas sneakers patched with tape on the ends and go playing soccer. Roy’s parents went to Spain 12 years ago to seek fortune but they have not succeeded, neither they have been able to take Roy with them. They have only been able to accomplish two things of all they promised to him: one, do not lose communication with him and two, send the jersey of Real Madrid each season.

But from all these t-shirts, the one Roy appreciates the most is that of Raúl González Blanco. The black trimmed in gold with which the merengue squad won its eighth European Champions Cup in Saint-Denis in 2000. Few in Cuba have Raul as his favorite player, the Spanish is reaching the end of his career, he never won anything with his national team and is not the classic player that with the ball at his feet can make a fascinating passes or dribbling.

The weekly package does not include compiled videos of his plays, those five minutes files reminiscent of legendary players dribbling rivals do not exist. But everybody do remember the Real Madrid’s number 7 wearing his captain’s armband, demanding silence with his index finger to all the Barça supporters at Camp Nou, his goals in the finals of Champions League, his one-on-one lobs against goalkeepers as hallmark and his effigy as angel of Madrid.

“I do believe that this is a dream, no, this is madness. Who was going to tell me that I would see Raul playing in Cuba, nobody imagined that, “Roy tells me when I give him the news.”If that’s not one of those gossips invented by people, now I think Cuba is getting good . Everyone is coming, now famous people are eager to visit this Island “.

Are you going to the match or see it on TV? I ask him. “There is no way that I can stay at home, I have spent years following Raúl, he is my player, and suddenly appears in my country, the least I can do is going to Marrero Stadium for him to sign me this shirt. This is not just anyone, he was the captain of Real Madrid, one of the most loved players, in a few years a statue of him will be placed together the Cibeles “.

Building a “physical” bridge between Cuba and the US

Tourism in Cuba, so far so good...