Tourism in Cuba, so far so good…

venus
in Tourism in Cuba
0 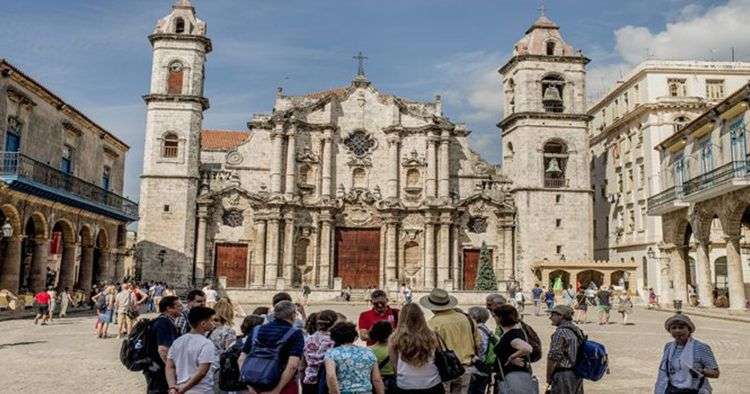 Tourism n Cuba is going like a dream. The figures already confirmed it. You only have to take a walk down any street in Havana to confirm the overwhelming amount of foreigners traveling to the island, a destination which, although far from what desired- makes its way among the most popular Caribbean tourist beds.

After reaching the desired goal in 2014 of three million -record in international tourist arrivals to Cuba, initial reports of 2015 are equally encouraging for an industry that is positioned among the first sources of income for the country.

According to the National Bureau of Statistics and Information (ONEI by its Spanish acronym), 371 160 passengers reached the Antillean archipelago, in January, for a 16 percent growth when compared to the same period of 2014. The number of visitors in that month also exceeded the amount recorded last December, when 332 190 foreigners arrived.

The headlines already make reference to it… Poles break record of visits, foreign chains redoubling their commitment to Cuba, new air operations, increasing arrival of cruises, crowded facilities; and the issue that sounds the most: US companies set their sights on the island.

The American newspaper The New York Times also recommended it when placing Cuba among the favorite destinations to visit in 2015. That news came just weeks after being selected Havana as one of the seven wonder cities of the world, popular vote called by the Swiss foundation New7Wonders.

¿Is uncle Sam walking through Havana?

But, if an injection has been effective to stimulate the flow of tourists to the Caribbean country, it was that of the announcements made on December 17 by the presidents Raúl Castro and Barack Obama about their purpose to restore diplomatic relations, after half a century of breaking-off and tensions.

In fact, specialized media indicate that the arrival in January of Americans to the island was around 75 000 visitors, 14 percent higher than that reported in the same month of 2014. For its part, the Italian news agency ANSA estimated that from 100,000 to 160,000 Americans came to Cuba since last December.

Although the US blockade still restricts travel to the Caribbean nation with tourist purposes, Obama’s measures expanded to 12 the categories under which US citizens can go to Cuba. Now any company or organization can offer itineraries without the paperwork and inspections that discouraged tourists in the past.

Wasting no time, a group of shipping companies of Florida, including the United Americas Shipping Services and Key West Express, seek to establish maritime routes to Cuba and thus take advantage of the relaxation of travel restrictions implemented by Obama administration. The major US airlines were also already announced.

The US market in figures

The report shows that almost half of the visitors came from Canada (181 010 Canadians, from a total of 371 160 travelers), whereupon the northern country strengthens its leadership among the major source markets in Cuba.

Another point of interest is related to the arrival of cruise passengers to the Antillean archipelago, indicator that rose from 928 in January 2014 to 3 937 in that same month of 2015. This confirms the predictions made by Cuban authorities that this season would be the most dynamic in the last decade.

ONEI also indicates that in 2014 the total tourism revenue reached 1 888 million dollars, ranking as the second source of income to the island after medical services exportation.

When talking about numbers, a pole that is breaking records is Jardines del Rey. With a growth of 20% -without precedent for a season-and the highest number of visitors in two decades, Coco and Guillermo cays, north of the central Cuban province of Ciego de Ávila, evidence the growing interest in this pole between domestic and foreign travellers.

According to Luis Baez, Ministry of Tourism (MINTUR by its Spanish acronym) commercial representative in the province, for the first time 9000 visitors spent the night at Jardines del Rey facilities in one day, and the airport of this destination average over 45 flights per week in the current season.

Not surprisingly, this pole will host the 35th International Tourism Fair, FitCuba 2015, the most significant event for the sector to be held from May 5 to 7.

In recent statements to this reporter, Maria del Carmen Orellana, MINTUR commercial director, said that the current winter season is going well with significant growth in the arrival of travellers.

“The period is showing with encouraging results the efforts to improve and enhance the quality of services, in order to reverse past mistakes,” Orellana noted. Beyond Havana and Varadero, main recipient poles of the Caribbean destination, the growing movement of foreign visitors in recent months is also noticeable in the rest of the country, she added.

“This is a good time to Cuba, so, all involved must take advantage and do our best towards the development of tourism,” she stated.

Despite pessimistic views on the ability of the Cuban tourism industry to receive the announced flows, local authorities ensure that the conditions are now ready to respond with quality to accommodations and services.

“The country has the capacity to absorb an increase of that magnitude. We are preparing ourselves for that day because blockade must end one day”, said Jose Manuel Bisbé, president of Havanatur, one of the leading companies of Cuban State Tourism.

Tourism, third largest source of foreign currency earnings to the Cuban economy behind technical and professional services and remittances, has left in recent years an annual average income of two billion dollars.