Chanel to the Rhythm of the Conga 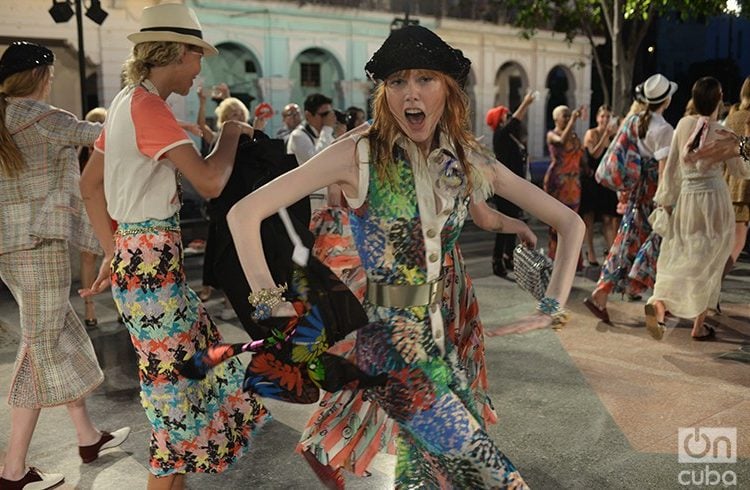 A “historic and mischievous revolution that will last in the annals of the house’s spring ritual.” That’s how Chanel described her fashion show of the Cruise 2016-2017 Collection in Cuba.

The avant-garde brand of world fashion was in Havana, and the Paseo de Prado was the scenario chosen to present the Cruise 2016-2017 Collection. Karl Lagerfeld, designer and artistic director of Chanel, is used to producing grand set designs for his presentations. This time, the city itself served as the entire decoration.

Tobacco, tropical vegetation, bright colors, rumba, “almendrones” were the Cuban motifs alluded to by the fashion Kaiser. The thread of the collection was the reinterpretation of the guayabera shirt, which Lagerfeld named “the Cuban tuxedo”. The style of La Maison and Cuban fashion were combined and were present in the same peculiar runway. More controversial signs would be the play on words implicit in the slogan “Viva Coco / Cuba libre,” stars, berets and clothes of military inspiration.

The participants in the fashion show had left from the Hotel Nacional de Cuba to the intersection of Prado and Neptuno streets, in Old Havana, moved by a caravan of more than 150 classic automobiles, convertibles, in pastel colors. In a few hours the revamped promenade was seething with a mass of artists, fashion professionals and other guests.

The curious were located all along the street, arcades and balconies, under umbrellas, and they remained despite a drizzle that threatened to become a May downpour. Exclamations were heard every time some famous figure appeared, be it Vin Diesel in person, Omara Portuondo or Alexander Delgado.

A bit over an hour after the previewed time – 6:30 p.m. – the French-Cuban Ibeyi sisters broke the silence of the expectation with a ceremonial tone, and three models dressed in white and black started parading.

After that the creations would be presented to the rhythm of Latin jazz with Aldo López-Gavilán on the piano, Ruy Adrián López-Nussa in percussion and the Havana Chamber Orchestra, directed by maestra Daiana García. The fashion show would close dancing to a Cuban rumba.

Apropos the fashion show, the magazine Elle recommended “taking note” and paying attention to the challenge presented by an open-air runway, exposed to natural elements, at 35 degrees Celsius and high levels of humidity.

The choice of Cuba for this presentation was due to “the cultural wealth and Cuba’s opening to the world, which make the country a source of inspiration for Karl Lagerfeld and for Chanel,” explained the official press release with which the fashion house gave the news last October.

Since 2010, the Café Marly in Paris, Grand Central Station in New York, Santa Monica Airport in Los Angeles, the Raleigh Hotel’s swimming pool in Miami, the Lido beach in Venice, the Bosquet des Trois Fontaines in the gardens of the Château de Versailles, Dempsey Hill in Singapore, have been, among others, the scenarios for these fashion shows, where Karl Lagerfeld’s creativity has also been expressed in his recreation of the spaces.

Some affirm that this world empire’s decision to hold its fashion show on an island where the brand doesn’t even have a venue, or a market devoted to the production of haute couture, was senseless. But this was not what Lagerfeld had in sight when making his choice: in the last two years Cuba has become the capital of vintage glamour. Chanel did what everyone is doing by moving towards a focus of attention.

Since the 1920s and 30s Mademoiselle Chanel offered her clients light and comfortable garments, preferred by those spending a season in the French Riviera or the Lido beaches. These creations were a great success in the press of the time, which declared them ideal for going on cruise trips or traveling to warm-climate destinations. Since it was the house’s hallmark, they combined functionality with elegance.

Inspired by that style, when in 1983 Karl Lagerfeld assumed the Fashion Artistic Department, he immediately developed a collection called Cruise, which updated that of the pret-a-porter, to reach a more cosmopolitan market. During the last 15 years, this collection has continued developing with a theme and its own identity. It is also characterized for being inspired on the destination of the fashion show.

Available in boutiques starting November, it responds to women who travel to tropical destinations as well as those who simply want to see new models. Chanel was the first house to carry out a runway for its Cruise Collection. From Paris and Venice to New York, the Collection travels and reinterprets legendary destinations. This time the inspiration were the colors of the Caribbean and its aesthetic referents.