monica-rivero
in Technologies of Communication and Media
1 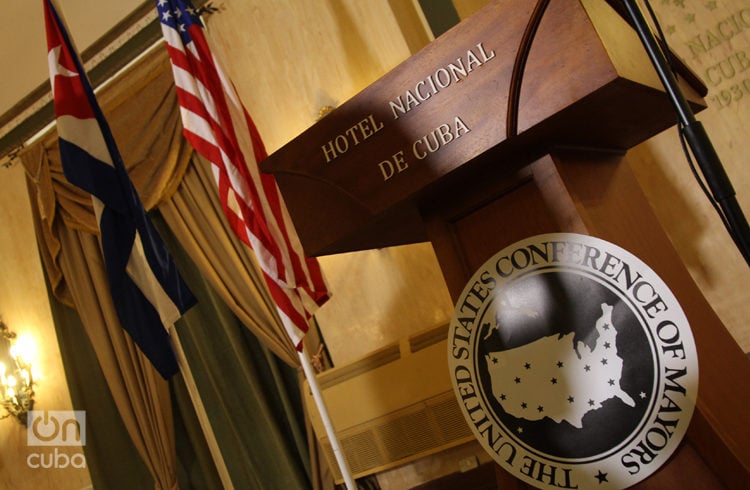 “If we went around the USA asking people about why we don’t have relations with Cuba I’m sure that 99 percent of them wouldn’t be able to give a single answer,” said Stephanie Rawlings-Blake, mayor of Baltimore and president of the US Conference of Mayors.

38 years after its official visit to Cuba, the organisation returned to the island by invitation of the Cuban government for a sojourn between the 25th and 29th of May.

In a press conference in the Hotel Nacional they announced that as a result of the trip they would not be signing a specific agreement, but that it would act as a departure point for future exchanges.

“Our aim has been to start a dialogue that we hope will continue from the USA. We would like to know how we can hold exchanges with our Cuban counterparts and to know how we can work with them (…) We are anxious to share ideas in the evolution of our relation with the Cuban people and the government,” said the president.

Their agenda included meetings in Havana with government representatives and community leaders. Finding mechanisms to favour exchanges in areas such as education, sanitation, infrastructure and transport can be found among the reasons for these meetings, according to a communique from the Conference.

Rawlings-Blake had begun her intervention saying what an honour it was to be in Cuba and thanking ‘the warm welcome that we have received as part of this official mission’.

She mentioned, among the political, economic, and cultural institutions visited since their arrival to Cuba the Instituto Superior de Arte, the Centro de Ingeniería Genética y Biotecnología and the Escuela Latinoamercana de Medicina. She commented that they have talked with Gustavo Machín, subdirector general of the US section in MINREX, and with Gustavo Cobreiro, rector of the University of Havana, between other Cuban officials.

It has encouraged us to support the lifting of the embargo, said the president, who, however, has not defined the position of the organisation that she represents with regards to this topic. “We are here to get to know the history, to know what the obstacles are,” she pointed out.

The mayor of New Orleans, Mitch Landrieu assisted her by explaining that they speak for all the mayors of the USA, which is ‘a large organisation, which has not defined a common position with respect to the embargo’.

Landrieu referred to what he considers part of a common history between the island and his city ‘where there is a large Cuban population, and which before the embargo received 60 percent of the income from Cuba’.

This mayor let his intention to open a new Cuban consul in New Orleans be known. “We know that Miami has rejected it,” he said referring to the decision taken in April by the Miami Beach City Commission that ruled out the possibility.

As a representative of the Cubans that make up his community, he said to OnCuba that among the messages that he wanted to give that ‘first of all, the pain of the common history of many families in New Orleans, who also strongly regret not being able to do business with Cuba’.

‘A large group of people think that it is time that this stopped. It is the time for reconciliation; we should try to find ways of connecting with Cuba, moving beyond the areas we disagree on and begin to share what we have in common. With mutual respect it will be possible to rebuild this natural relationship that has existed for so many generations and move on from where we were to where we can get with this’, he concluded.

Mick Cornett, of Oklahoma referred to the fact that Cuba has always been a source of curiosity for Americans. ‘And in a couple of days – which is of course very little time – I have been able to appreciate that the people are very genuine’, he said.

The vice president recognised that he had little information about Cuban politics and history; ‘but I’m here to learn, and on returning to the USA sharing what we have seen and talking about the hospitality with which we have been received’.

‘The US Conference of Mayors has a long history with the Cuban people’, the CEO and Executive Director, Cochran said to OnCuba referring to the 1978 visit. We came to visit during the Jimmy Carter administration with a delegation of 40 of us. We were received by President Fidel Castro.

As the only member of the delegation to repeat his visit to Cuba, what are the differences you have noticed between your two trips?

Havana is the same; it lacks the presence of Fidel Castro, one of the most dynamic people I’ve met – and that isn’t a political statement, when you spend an hour and a half with him you never forget it. But you see economic development, there are more businesses in the private sector, and lots of commercial activity outside of the State.

I am here at an incredible moment in which we have a president that supports relations between Cuba and the USA with more force than any other that we have had previously.

Why did it take you 38 years to come back?

I believe that over the years the Florida region was an impediment politically; also the way and the tone of the leaders that we had paralysed it somewhat. But President Obama – I also believe that it could have happened with Clinton too – has given us inspiration, we are very content with the place we are in now and we will continue working on this.

The US Conference of Mayors has not defined position with regards to the blockade; but what is your personal opinion?

I believe that they should continue working towards its end, with public and democratic support. Eventually it will happen. I am very optimistic in this respect.

Chanel to the Rhythm of the Conga