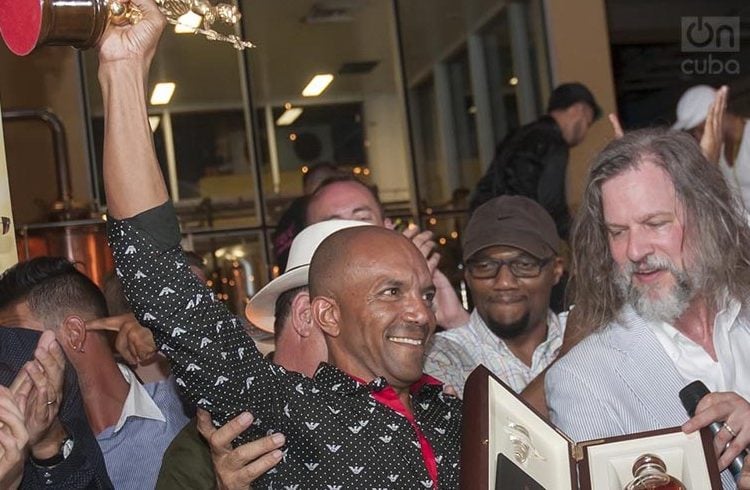 With an artisanal grinder and pressed sugar cane the Cuban bartender Amarury Cepeda arrived at the final of the 2016 International Cocktail Grand Prix.

The challenge was to present a new cocktail that would combine Cuban taste, culture, and tradition. He came up with ‘Cunyaya’ a drink based on aged rum, sugar cane juice, honey and bitter orange.

So, going back to the very origin of Cuban rum and also giving a nod to the first manual mill used in the island, this bartender won first place in the competition, which places Cuba at the forefront of the competition for the third time in its history.

‘I am always inspired by the cocktail they ask for, wherever it is. This year they asked me to base it on Cuban tradition, so that’s why I went back to slave history, their customs where I found out that the first mill that they used in Cuba was called Cunyaya. It occurred to me that I should start my drink there’, says Amaury, who is now the most famous barkeeper in the land of the Yayabo.

The competition judged just that, the creativity of the finalists to create a drink based on Cuban rum: Havana Club 3 years, Masters Selection, or 7 years. The Cunyaya, recently coined by Cepeda, contains Havana Club 7 years, which according to him, is the best to balance out a cocktail: ‘is has mixes of different ages rums, with a unique touch of vanilla, mixed with coffee and a tremendous range of things’.

With all the pressure of a timed competition, the thirteen finalists, representing diverse nations like Chile, Lithuania, Ireland, Denmark, Canada, Switzerland, UK, Finland, Colombia, German, and Cuba, had fifteen minutes to skilfully assemble their cocktail and to present it in the most original way to the judges.

With no small amount of ingenuity some presented theirs in front of the ‘bar’ of the 1930 Salon in the Hotel Nacional. Like the German Lars Brender, who displayed a Cuban flag in his bow tie and  who also performed the ritual of pouring the first sip of rum for the Saints. Others, theatrically, managed to involve the public in some way or another in the preparation of the drink. Like the Chilean Diego Olivera, who before beginning asked everyone to join him in a selfie and then linked his cocktail ‘my land’ to the theme of ‘everywhere’ from the Havana Blues soundtrack.

In addition to the expert mixologists that made up the jury presided over by the prestigious Anistatia Miller, author of dozens of cocktail books, a group of sommeliers and bartenders from the public had the opportunity to vote for a competitor. In this case the popularity prize went to the Dane, Klleist Terkel. Second place when to Lithuania with Veilandas Povilas, one of the few women present in the contest, while third place was taken by Manan Krause, of Germany.

‘Each one arrived with no idea of what they were going to do. They all went to the market and chose their own fruits and spices, because, above all, we wanted the cocktails to have that taste. In reality the competition was very tough this year, each time it becomes harder to raise the bar because the level is just so high all round. We have been surprised to find young cantineros with such technical mastery’ comments Alejando Bolívar, bartender of the Floridita bar since 1993, and member of the jury in this 11th edition of the Gran Prix.

After many setbacks in his fifteen plus years as a bartender, now that he has claimed the competition’s prize – a bottle of Havana Club Máximo and a grant of 20 thousand euros – Amaury dreams of maybe opening his own bar and investing in his studies.

In the world of mixology, it is said, not respecting the client is the worse error that can be made: ‘you learn to leave problems at home when you go to work. You have to be sympathetic and to talk so that you really get to know people’.

‘I would say so. From the moment you come through the door, I know what you’re like, your culture, and I can almost guess what you’re going to drink’