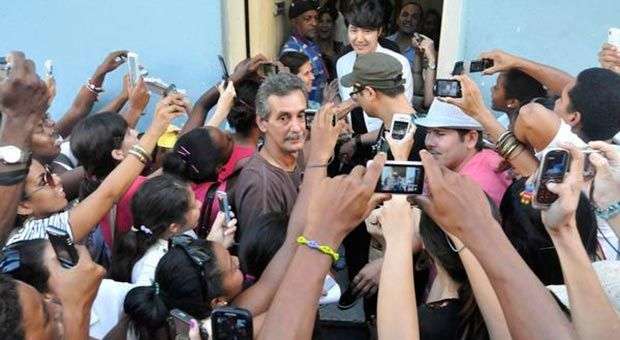 Among the visits of North American superstar Beyonce and now the famous South Korean actor and singer Yoon Sang Hyun, known in Cuba for his leading roles in dramas like ¨Queen of Housewives¨ and ¨My Fair Lady¨, any day we may find a Cuban in shock.

We are not used to see media figures out of the TV bubble and wandering around the streets of the city but, as psychologist Calvin would say: we get used to what we like very quickly.

Yoon Sang Hyun came to Cuba for six days. He arrived last Thursday invited by José Martí Cultural Society. The vice president of the institution, Adelaida Ramos Leal, told ACN that he was interested in learning about the work of the institution-represented in South Korea through a Marti club – and confirmed his attendance last Tuesday morning.

According to Radio Rebelde, the artist expressed his desire to meet Cuba, after a Cuban artist’s delegation visited Seoul in mid-2013.

“The butler Seo”, as he is known by many of those who consumed ¨Queen of Housewives¨ by Havana Channel, will have a busy schedule in the Island.

He already participated in a television program, and faces photo shoots and a meeting with Korean residents in the country. Several media outlets announced that, in addition, on Sunday, November 3rd, he will be at the opening of his country’s pavilion at the 31st Havana International Fair, FIHAV 2013.

On the morning of Tuesday, November 5, he will visit the headquarters of José Martí Cultural Society to learn more about the work of the institution, where he will meet with his fans, with whom he will accept to take pictures.

Among his few brief statements to the national audience he confessed that “I had no idea of the success of these telenovelas in Cuba and South America, I can not really say why,” and added: “I ​​will be very happy if you continue to support Korean soap operas and hope all the people of Cuba to enjoy them.”

About these productions that have earned him many admirers among Cubans, he explained that “When we shot we just slept two hours a day. Nearly all telenovelas are shot in a hurry; two episodes must be ready each week . ”

Yoong Sang Hyun is not as young as you think. He is 40 years old (born on September 21, 1973) and, although here we know him as an actor, he also has a successful career as singer and model.

However, due to his performances in over 10 soap operas he has gained popularity, excellence, and to the new star awards. He also has at least two films: Sunday Seoul (2006) and Tone Deaf Clinic (2012).

Attractive, funny, sentimental, elemental, action, love, detective or horror and short -term Korean melodramas won space between the preferences of Cuban population and self- employed dedicated to “recharge” hard drives and flash memories with all kinds of videos.

Yoong Sang Hyun came here to entirely win Cuban popular devotion and also to show that, you can live better even without an overwhelming cultural industry, people always need to dream.

OnCuba lets here, to the fans, the facebook profile of Yoong Sang Hyun and his official site, though the latter will be of little use to those who do not know Korean language.