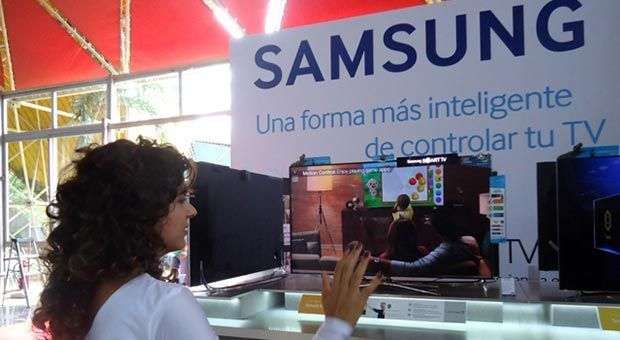 The famous Korean actor and singer Yoon Sang Hyun is on a visit to Cuba since last Thursday, and was on Sunday at the opening of the South Korea Pavilion at the XXXI International Fair of Havana, FIHAV 2013.

From the stand of Kotra (Korea Trade-Investement Promotion Agency), a business center in his country here, he told the media his views on the island, and said the key to the success of his plays is that “men and women are the same throughout the world “and” the romance and love.”

Yoon Sang Hyun has become the image of Korean business in Cuba. Banners with his image adorn the pavilion where Pablo Ramos Garcia, a member of Kotra explained OnCuba the commercial aspirations of the Asian country in the Greater Antilles.

“In the pavilion we have, from small to medium, six firms. It is Izon ( optometry ) , Zeaco (batteries ) , TPR ( steel products ), Global Green (equipment ) , Two Worlds ( textiles and beauty products ) and Sonmy (steel) . These businesses are the raison d’être of Kotra , which gives support to all of them.

“In addition to these, we have Hunko , Samsung , Hyundai, and Neneka that has been in Cuba for nearly two decades and has extensive experience in the import and export of products, and we have a large stand of Kotra and another of the Korea – Cuba Exchange Association “.

Is the amount of exhibitors growing this year?

“It’s more or less the same. Last year seven companies of Korea came, and in this show there are six, but the volume of exhibitors from each of the other firms is greater. Samsung last year had only a 75 meter stand and this almost reaches 300, and Hyundai’s  last year was about 80 meters, and this time is about 200 ” .

That can lead to more interest from South Korea to negotiate in Cuba?

“Yes, of course. We also have here many Korean businessmen doing business in the region. They came from Mexico, Venezuela, Panama, Dominican Republic, and Guatemala … and are interested in trading with Cuba “.

What are the main businesses Korea has with this country?

“Currently almost all Korean products are sold through trading companies. But now the company Ambos Mundos, textiles and beauty, made ​​contact with TRD and other Cuban entities concerned. Also there is Samsung, that has three years of experience in Cuba and direct links with TRD through CIMEX… and they should increase their turnover. ”

Is there a specific area that interests Korea?

“All . The Koreans would like to negotiate on almost everything, and in Cuba I see that there is interest in working with Korean companies usually are serious” .

What impact has the presence of Yoon Sang Hyun on your country’s pavilion?

“It was very important. He has many followers. This trip will favor the visit of many Koreans and strengthen the image of Cuba in their country. ”

How does Kotra have impact on the development of trade relations between the two countries ?

“Kotra is an agency of the government of South Korea with offices in more than 100 countries. Its aim is to help Korean businessmen where they work and promote the products of the countries in which there are offices of Kotra. For example, right now we are working with Cuban companies as Havana Club , which help the sale of rum in Asia , and recently in Korea we had a food fair with the participation of Cuban entrepreneurs who help promote rum , coffee , seafood … ”

Curious Information about the Korean pavilion

The owners of the Ambos Mundos company, Y. C. You and Kelly Kim (according to their English names) gave interested ladies the possibility to choose as like which dramas actress they wanted the hair, makeup or nail grooming. “We take advantage of the interest aroused by Korean telenovelas in the country”, he said to OnCuba.

The devices are connected directly to the Internet and through old cher with all Samsung devices that are at home. They are handled by voice control or manually, as TVs have a motion detector.