Estela Ferrer Raveiro
in Technologies of Communication and Media
0 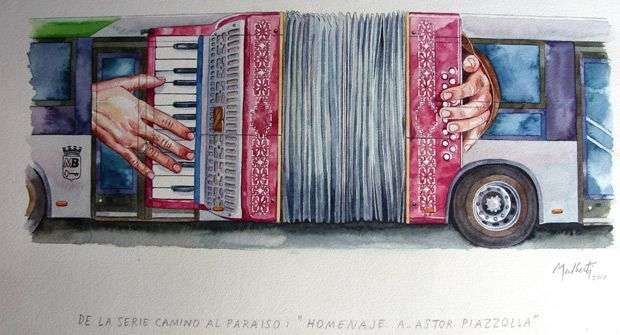 Cuba’s history can be written from dissimilar views. But all would include impressive anecdotes, some more gray than others. In our so-called Special Period in Peace Time, one of the most depressing aspects of social life was – apart from everyday life-urban transport. In this framework, the subway project remained in that, a sketch, and the called metro bus or “camels” began to populate in the cities, a buses that were the Sahara reduced to a few square meters where passengers were transported.
Transportation and urban life are precisely the themes that animate the productions of two artists: Guillermo Ramirez Malberti, the “other Guille” and Ernesto Menendez Domecq.
I know Ernesto Domecq´s work since few years ago. What led me to write for the first time was to know his persistent passion for drawing. A young man making some pieces with a level of realism and impeccable technique was a rarity in our art scene. Shortly afterwards he extended his work to the digital interaction as a way to engage the public in his creations.
From Malberti I knew more about his work in the cinema than his artistic production, but I was able to get close to some of his pieces in the Cuban Contemporary Art classes. Now they both are enrolled in the adventure of taking us by the hand through this singular Road Movies at the Espacio Abierto Gallery of the Revolucion y Cultura Magazine.
More than a road trip , both artists offer scenes, fragments of a trip from cars. Malberti presents his posthumous tribute to the camel, an installation that represents the forms of such polemic transportation. Together with this unique piece, even the Patroness is decorative motif on a bus. Domecq, meanwhile, takes the almendrón (old American car), transforms it into an armored vehicle or a sui generis transport that grows skyward in order to multiply the space. Each one, from his style, looks for motives to his art in the space of the street.
It is precisely there, in that moment, when they are taken out of that context and represented on canvas or cardboard, where cars stop being just a transport to become symbols of temporal relativity of our history where everything is juxtaposed. The almendrón may date from 19 50, but continues unabated as alternative transportation riding through the streets of Havana.
Then, these proposals move themselves between documentary evidence and humor and irony as discursive tools; a humorous not from the acidity of criticism, but rather looking for a collective complicity. In Domecq it flows spontaneously and as for Malberti, we just have to remember the camel which participated at the 9th Edition of the Biennial of Havana where even the Egyptian pharaohs had “CUBALSE” bags.
Road Movies leaves us a good taste by enjoying an intergenerational dialogue between these two artists. One, in his mature stage, and the other is starting to involve us into his concerns and formal solutions .

Orlando “the phenomenon” Cruz: the audacity of pink fists