Orlando “the phenomenon” Cruz: the audacity of pink fists 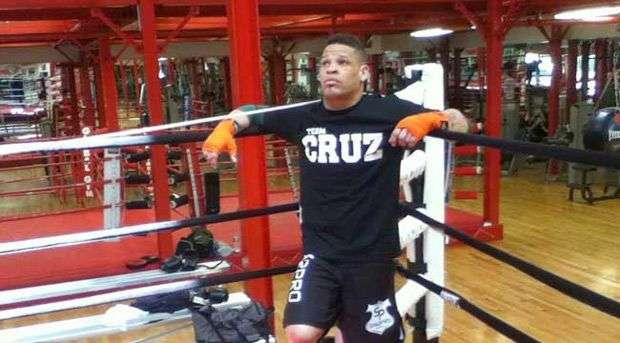 Almost twelve months have passed since the Puerto Rican boxer Orlando Cruz openly declared his homosexuality. “Such audacity” had to be supported by a strong conviction of what that decision could mean for millions of people. It was a frontal assault on cultural and symbolic conceptions of a space historically inhabited by “real machos”, and which was just made for them. It immediately caused a stir in professional boxing scene. The reactions seemed to be placed in both corners of the ring , completely opposite.
He received the support of many people that applauded his courage and were willing to join him in this fierce battle he would face. Undoubtedly, this was to be his most significant fight and also the most extensive .
There was no peace on the other side; the succession of homophobic attacks and discriminatory remarks was constant. Most of his opponents were part of this massive club of “macho, male, masculine” not willing to cede an inch of hegemony in these areas that they still retain as supposed niches of manliness, manhood and justified violence. “Women and gays have taken enough from us everywhere” – they seemed to say among their rampage.
The phenomenon Cruz, who had debuted as professional in 2000, after participating in Sydney Olympics, responded with greater commitment. The LGBT community identified itself with his bravery and welcomed him as a leader in the fight to undo inequalities and exclusions, even to the point of exalt him to the Gay and Lesbian Sports Hall of Fame together with athletic idols as Martina Navratilova and Gregg Lougannis.
His ” daring ” was in crescendo as his motivation, especially after the agreement of the bout for the vacant World Boxing Organization featherweight title, where he would face Mexican Orlando Salido. It was his chance to become the first universal champion who admitted being gay while active.
In August this year he posted a video on Facebook asking for marriage to his couple. Later he gained new enemies when presented the clothing with which he would fight for the belt of the 126-pound. The design referred to the Puerto Rican national flag, but it used the colors of the emblem representing LGBT. He was even accused of unpatriotic, but in unison thousand voices rose in his favor, as his compatriot René Pérez (Calle 13) who wrote this message on social networking hours before the bout: “You have to be really brave by showing yourself with LGBT flag before boxing, surrounded by a macho audience. @ ElFenomenoCruz is already a champion. “
It was not all, he decided to continue ” making fun” of the concepts of male hegemony and also announced that he would go into the ring with pink gloves. The cause: to draw attention to the need of preventing and fighting breast cancer .
“He’s a boy worthy of admiration for his courage, decision to seek personal happiness in a world that usually does not forgive those who try to get out of what is supposedly considered normal. My respect for him. “These words sum up what was said by several Cuban athletes who refused to remain indifferent to the maelstrom of comments unleashed on social networks, including former Havana’s basketball player Juan Leopoldo Vasquez, pole vaulter Dayli Caballero and Olympic gold medalist Yurisel Laborde.
The day came. His fight against Salido took place yesterday, as part of the program performed ​​at the Thomas and Mack Center in Las Vegas. The combat was perfect prior to the big match Marquez -Bradley at 147 pounds. The phenomenon could not fulfill his dream of winning the world title in his division. He was beaten by the Mexican who prescribed a crushing KO at one minute and five seconds of the 7th assault. At that moment the judges´ vote reflected a 59-55, 59-55 and 58-56 against him; only in the 5th round he was seen somewhat superior to his rival.
The reaction of the “super machos” before Cruz’s defeat was a true reflection of the sense of threat felt in an area considered private to them. They gave vent to all kinds of ridicule and discriminatory attacks on Twitter, Facebook and in any space they found. Fortunately, the necessary encouragement was not absent and came from the hand of thousands of men and women who are committed to changes, who want to subvert those social relations based on inequality, male supremacy, marginalization and total disrespect towards what is different or that goes against preset standards.
For my part, I continue thinking of how many, before Cruz, have wanted to take that so bold step, but do not have…