marta
in Politics in Cuba
0 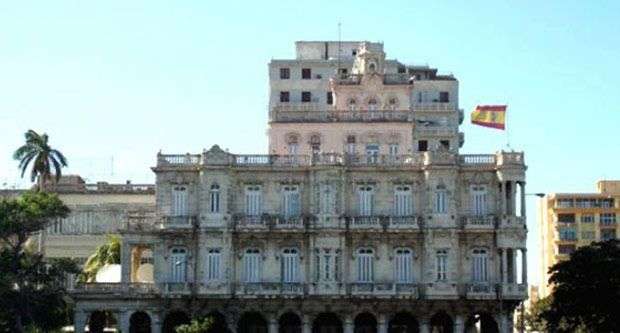 The so-called cultural industries and the art market have focused the debates held by the Spanish Embassy in Cuba, during the three editions of “Thursday from the Embassy”, a space created with the “primary intention of being a cultural meeting place,”   Ambassador from that country on the island, Juan Francisco Montalban told OnCuba.

The debates covered the publishing world with Cuban writers Leonardo Padura and Pedro Juan Gutiérrez, the art market, by critic Rafael Acosta and plastic artist Roberto Diago, and the future of the performance on the island, with the actors Jazz Vila and Osvaldo Doimeadiós.

“We tried to bring in what they have gone a step further, which is in the industrialization of culture, with its positive and negative nuances,” Paul Platas, Spanish Cultural Attaché, said.

“It’s one of the few issues on which Spain can bring to Cuba some experience,” Platas said, at the end of the third edition of the meeting, which focused on the challenges of Cuban actors in the current circumstances.

The official confessed to being very happy with the public response. “Each time it generates more discussion and more demands to participate, despite the intense cultural life of Havana,” he added.

Meanwhile, Montalban said he was “very satisfied” with their “team from the culture office of the Embassy” and “the Cuban people, which has us excited.”

This Thursday … they also inaugurated the exhibition Counterpoint, of fine artists Osmeivy Ortega and Marcel Molina and actress Broselianda Hernandez debuted publicly as a singer with songs by Spanish Joan Manuel Serrat and Brazilian Chico Buarque.

“These Thursday from the Embassy are only part of the collaboration,” Vila said. He added specific support, such as those made for the staging of La Celestina, by Teatro El Publico Company under the direction of Carlos Diaz, and for the team to Cuban independent film, Juan of the Dead, so it could participate in the Goya award ceremony, which it won in the last edition of the Iberian film festival.

The popular actor noted that the staging of Santa Cecilia (The Public Theater), which marked a before and after in his acting career would not have been possible without the help of Spain.

However, experts have warned of the gradual decrease of Spanish financial support to local projects, with ups and downs since the European Union took its common position for Cuba, in 1996. Some experts insist that this downward trend has been exacerbated by the victory of the Popular Party in 2011, and aggravated by the financial crisis that the Iberian nation is going through.

Next Thursday the Embassy: They have the word

“Our next Thursday from the Embassy will be about gender because we want to influence the topic of female creation, gender culture and gender alone,” Platas said.

Does it make sense today to talk about sex, male or female or third gender, homosexuality and heterosexuality?, that will be the question that encourages debate next October 17 at 5:00 pm

The program has also the exhibition of 12 young Cuban artists, among which Lisandra Ramirez and Gabriela Garcia stand out and male fine artists such as Nelson Dominguez, Ernesto Rancaño and Osiris Cisneros.

“They will present different examples of female creativity in the arts and male creativity, representing the feminine”, the official stated, who thinks “it makes no sense to exclude men because then we would fall into the same mistake ever.”

The activity is part of the day They create Cuba, with which, from October 9 to 19 this year, the Spanish Cooperation Agency (AECID) and the Cultural Ministry, and the Ministry of Culture of Cuba and other national cultural institutions, intend to exalt the female creation in all artistic disciplines.

“Gender equality is a line of work that we consider essential. The role of women in cultural creation, we thought it was a great topic to focus this week on, which is especially symbolic for us because we celebrate the National Day of Spain, “the Ambassador said.

During the sessions they will present audiovisual materials,  theater, books, and there will be concerts and art exhibitions, staged mainly by women creators.

One of the participants in They create Cuba, the Spanish choreographer based in the island, Susana Pous, said that this “is an opportunity to see the proposals from women.”

“Women have a lot to say and we are in time to defend the place where we are. You have to show, you have to share, which is the most interesting of these events: to share with other women who are in the same struggle, dealing with a woman, it’s wonderful. But, very difficult, “the choreographer said.

Pous will have her place in the Café Teatro Miramar, on Thursday October 10, to show fragments of her choreography Showroom with Danza Abierta, and the work in progress of her latest creation, Feast of the Senses.

They create Cuba is notable for the inclusion of areas outside the Cuban capital, such as the Fiesta Iberoamericana (Holguin), the International Festival of Video Art (Camagüey) and presentations at the Terry theater (Cienfuegos).

“Working only in Havana is an error that we fall very easily into because there are so many cultural life here, we believe it is sufficient to try to influence the capital. But in the interior there is much interest in Spanish things, “Platas said.

Although the entrance is controlled at the door of the Sarrá Velasco Palace, seat of the Spanish Embassy in Cuba, about 250 people can attend the participatory cultural space so far convened monthly.

“We could do elsewhere. But we have this magnificent palace, a building that Spain wants to continue working in Cuba open to Cubans can meet inside and can enjoy it, “he said.

For this reason, according to Platas, frequently they receive requests from architects, international and domestic tourists to visit.

“We cannot open every day, for safety reasons, because it is an office of the Spanish administration that has commissioned work. However, we have found this opportunity for people to visit a Cuban building “.

Spain maintained, since 1995, a cultural center, located in the Havana Palacio de las Cariátides. In June 2003, it was closed by Cuban authorities on the grounds that it did not meet the requirement of the foundation agreement, which stated “respect for the sovereignty, territorial integrity and non-interference in internal affairs.” Since then, they began to develop their activities in spaces called by national institutions.

For a young college student, who requested anonymity, the most interesting is that it takes place in the seat of an embassy. “Usually those are sites Cubans that look from afar, by the limitations that historically we have had to travel,” he said.

With a new Cuban immigration policy, which since 2013 eliminates exit permit procedures, Cubans are now facing restrictive migration policies in countries such as Spain, which require a letter of invitation and proof of solvency, in a country where average salary is 25 U.S. dollars, according to experts.

In the debate last Thursday at the Embassy of Spain in Cuba: Jazz Vila, Osvaldo Hernandez and Doimeadiós Broselandia