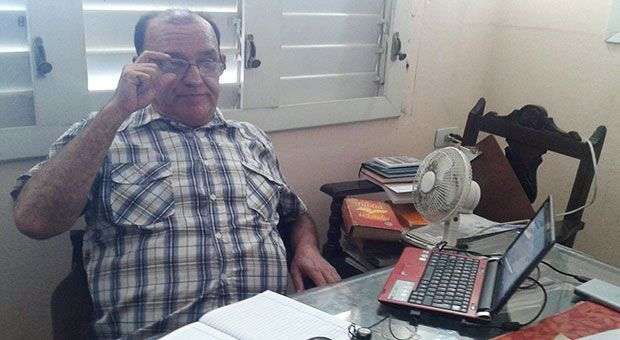 In the next twelve months the Cubans will not experience a “quantum leap “in their lives, though, even without notice, they will be participating in real changes in the economy.

I think Eduardo López Bastida , or Kuten , as he is known at the University of Cienfuegos , a ‘ economist by conviction ” who began his career as a chemical engineer , became a doctor in this matter, an MA in energy and the environment and the other in integrated management of coastal areas. One day he liked the economy and went to make a living out of it, to defend the other side of that coin: the one that cares about the environment and social equity .

“With the economy with environmental focus is that I see the explanation to the perceptions of people about slow changes which we live through. We are in a process that not only speaks of economic changes, but is at the same time preserving social equity and care for nature. Changing while keeping balance in these three items takes longer than entering pure and simple market laws, “he says.

And he could be right if we look at China, with its polluted environment and its large social debts.

To Kuten the mistakes of Soviet socialism and classical Marxism were copied in Cuba and we still must be overcome them “The main mistake was that we wanted to do a socialism in distribution and not production. But if you do not produce, what will you distribute? “He says, while sound , hard cash after that statement , the more than $ 300 million left to export in this 2013 , for violations in domestic manufacturing .

To illustrate his ideas, López Bastida frequently resorts to the Gross Domestic Product (GDP). Cuba’s GDP is held by 70 % of services (tourism, international collaborators and ETECSA) which makes of its economy very vulnerable to the vagaries of the rest of the world.

On the morning of December 30 the professor pauses in preparing an article on lay spirituality and the gifts in the XXI century, with which he wants to participate in the Think Countercurrent contest, which he won in the year 2012. We return to talk about the economy.

López Bastida sees as a logical consequence of the ongoing transformation the rapid and creative growth experienced by the private micro-enterprises (as he prefers to call the self-employed) .

When they do they show even better the slowness the state entrepreneurship shows and the tremendous lack of autonomy to make decisions, a reality that the researcher expected to begin to change as they move to implement from experiments in this 2014, thanks to which managers and their boards of directors may invest part of their profits as they see fit, without having to refer to their ministries or wait for the Economy to monetize any resources they have frozen.

The country’s production stage is for Kuten as a track and field. “The state is the Jamaican sprinter Usain Bolt. The self employed and cooperatives and joint ventures are other runners. If Bolt is not prepared, the other racers will win. What is the idea? That Bolt, as a state company, will be given sufficient conditions to be the pointer of the race. “

And to reaffirm the need to untie the ropes to “Bolt”, he reminds us that reliable estimates place at two billion dollars remittances entering the country each year, of which 60% is intended to encourage small independent businesses.

The “dietary supplement” for the state racer would be foreign investment, the researcher says. “It is essential that before a country will flourish must devote 25% of its GDP to investments in infrastructure (telephones, roads, internet) and we spend only 9%.”
A source of fresh currency should be the economic zone of Mariel. “Some people are comparing the opening in Mariel to the time thousands of French settlers migrated to eastern Cuba fleeing the Haitian Revolution. At a stroke the island received investment and talent, and that many now expect from the northern port, “he said.

Anyway, he confirms, is soon to have much hope created and as has been said by President Raul Castro, Cuba must diversify its sources of income, as it is not expected that the port of Mariel to be like a miraculous hand of Midas that make us rich by just touching us.

“By selling cakes in one corner, a country is not developed.”

The Cuban social imaginary has placed small private entrepreneur as a potential paradigm of almost instant success. The reality is putting things in place, as though every time the number of active self employed is closer to half a million people, are also counted by thousands the number of those who have given back their licenses.

It also happens that the tax law released in 2013 reaches its first anniversary “showing its true colors”. Hundreds of owners discussed (even in court) the amounts in thousands of pesos the National Tax Administration Office (Onat) considered as income not declared, without any inspector in person has studied the behavior of commercial business.

For this economist, the path of development is not in the small private property, but in the union of various types of property. “By selling cakes in one corner a country is not developed, but also more complex activities need not be held by a government department. That’s where I see the most suitable for non-agricultural cooperative scenario, which will grow significantly in 2014 and 2015, “he says.

To argue this he remembers the two incentives decided by the government to promote this form of management: the halving of the tax burden to be paid cooperatives with respect to private business and the first priority to access to the wholesale market. In starting and it will be implemented.

It will also continue marching the advertised monetary union, although during the next 365 days that will be an issue in construction, the doctor says. “Even in 2015, I see that the problem is solved in the public sphere, what people see. First they must be resolved distortions caused by the change of 1 for 1 used by the business sector and then act on the 1 for 25 they have in CADECA. Yes, I think people will be indirect beneficiaries of increased efficiency in companies that apply that adjustment. “

The steps already taken and the most important to come will generate, according to Kuten , some perceptions of improved quality of life, ” but let’s be real , with growth of 2.2 % in GDP, as is being advertised , I don’t think anything will increase significantly, as to see a real impact we need a growth between 6 and 8% . “

One such area where the quality of life doesn’t improve is related to food, dependent on an agriculture that just doesn’t take off. “Just this year it accounted for 2.2% of GDP, to show a real impact should be at 10. It is necessary to promote more incentives, free more the productive forces, but I think it should also appeal to the conscience of the peasants, to fulfill commitments to the state, because many in what they are thinking is to leave alone the special period “he says.

Such practices also color a mixed picture that reflects Cuba in the pre- 2014 hours. In economics, where the future of a model is decided yet in conceptualization, will come “big” changes Kuten believes, and he will have a whole year to be confirmed or refuted.

Rights to a respected childbirth