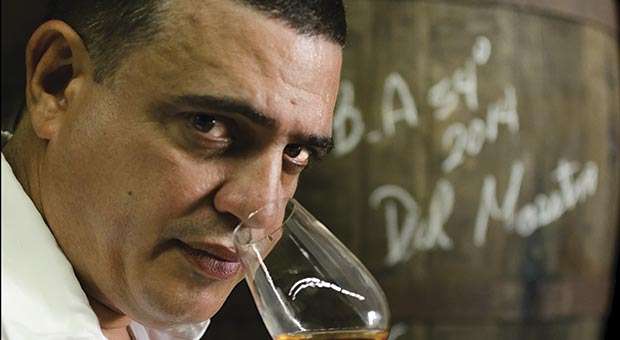 This story could have begun in a tavern (with rum included); however, the conversation was “fueled” by coffee. I’ve known the rum that Asbel makes longer than I’ve known him. Ever since I heard him speak so passionately about the subject, I’ve changed my drinking habits: now I drink less, but with better quality.

“The history of Cuban rum is intertwined with the history of Cuba. The term rum did not emerge in Cuba but in other Caribbean islands. However, it was in Cuba that light rum was created, based on a spirit of higher quality and more pleasing to the palate, thanks to its aging in white oak barrels.” And that is how our talk began.

“From the creation of that light rum until today, that beverage has been developed by mixers (mezcladores), who were later called rum masters. That is why the masters of today are the keepers of a centuries-old tradition that is an important part of our culture. Rum is Cuba’s heritage, passed on from generation to generation.” Asbel works for the Havana Club brand at the dark rum distillery. He is 45 years old, and has 26 years of experience.

He has worked in rum production from the ground up, beginning his career as a rum-maker in Manacas at the age of 20, after earning his technical school certificate in beverage and liquor production. He labored in the aging department of the rum plant, filling, emptying, and repairing barrels. They say that he used to be so skinny that the hammer he used to seal the barrels practically weighed more than him. He liked the smell of the aging warehouses and could identify the different aromas. That perceptiveness enabled him to pass the tasting tests that marked his future. He earned a degree in chemical engineering and has also studied economics, something that is very important in the very competitive world of rum production. More than 15 years ago, he was granted the title of rum master.

“Nobody is born a rum master. It is not something that you inherit. A rum master is much more than the person who makes the mixture. It is a profession in which one engages in two ways: scientific/technical and cultural.” For tipplers, his is an enviable profession. “There’s never been a case of an alcoholic rum master. You can down a lot of drinks in search of tastes, mixture, sensation; I myself have suddenly realized that I’ve drank a bottle of rum while working on a mixture, but I’m not at all drunk.”
The rum master’ movement is structured into several categories: Reserve (Cantera), Candidate (Aspirante), Master (Maestro) and First Master (Primer Maestro). At present, Cuba has only two First Masters: José Navarro and Juan Carlos González .

“Masters should be simple, humble people. It is a collective job. A new product is always the work of many. I’m working with mixtures that were created by other generations, and that I have inherited. Years from now, other generations will do the same with these mixtures and with the foundations that I am laying today.”

I ask him if he has a favorite rum, putting him in an awkward position. “I like good Cuban rum, and it’s hard to say which my favorite is. I have made many brands—Legendario, Arecha, Decano, Villa Clara, Varadero, Ron Caribbean….”

I make it easier for him: which is favorite among Havana Club rums? “The dark, aged rums, such as 7 Años, Selección de Maestros…and Havana Club 15 Años, because it it was a hard-fought achievement, and when I see it I say to myself, ‘Finally, I made it!’”