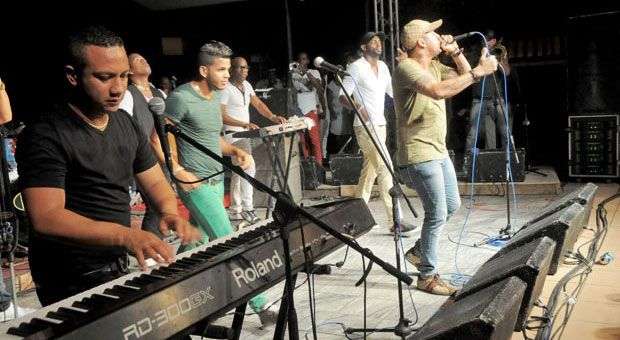 Faithful devotee of songo, melodic concept raised by Juan Formell in his legendary Los Van Van band, Maykel Blanco reflects in his works that reality that surrounds him. Respectful of own codes of popular dance music, the young pianist and leader of Salsa Mayor says he has begun an upper stage for the orchestra , which is a search for new sounds , but without losing the style that has characterized it along the way.

A toda maquina (at full steam), the album saw the light in 2013 with the Italian label Planet Record, marked the beigining of this new time of the orchestra. And it appears that the phonogram has added followers to Blanco and his troop of soneros . Recently, the Peruvian Salsa and Timba (www.salsaytimba.net) website dedicated to promoting this kind of music, elected the Cuban group as the most important orchestra of the year in the South American country , while the aforementioned album proved the best in its class and Tremenda Pinta was the song of the year.

Maykel explains that he visits Peru twice a year and there is an audience that welcomes his music there. Something he just reconfirmed since he returned a few days ago, after doing several concerts in Lima.

– How do you feel about these awards?

-Very pleased. Now we are more committed to the Cuban public and our supporters in the world. It is a challenge for the next disc of the orchestra.

– What is the main ingredient in “At full steam”?

-We recorded it for the entire world with Planet Record, and Bis Music obtained a license for Cuba. It’s our sixth album. We try to keep growing with this, but always keep the style of Salsa Mayor.

“It’s a phonogram in which we have consecrated the sound of the orchestra, where ninety-nine percent of the songs are mine and there is one by Mauricio Diaz.

“This CD marks a new stage of Salsa Mayor, growth in regards to music. Among the features of this volume highlights the fact that is recorded by the members of the orchestra, unlike other previous albums where I was supported by other instrumentalists. We have reached a great maturity and we have very good musicians. It has been a challenge. ”

– What story does Tremenda pinta tell?

‘It’s a declaration of love from a man to a woman. He devotes her beautiful phrases. The chorus is very contagious, is made for sticking.

– What other tracks are popular in this disc?

With Salsa Mayor something strange happened at the same time beautiful through the years. We have an international market for which some songs from this CD have played well. For example, in Europe we have done very well with El Artista, in South America we have had better results with more rhythmic songs like Se acabo el amor, and in Cuba Bembé and Tremenda Pinta, which occupied the first places in the hit parade of the radio. ”

-When you talk of new colors in the sound of the orchestra, what do you mean?

We are thinking to include in the orchestra some instruments to achieve greater harmony, but our mark and sound that characterizes us will continue. It will always be the songo, our way.

“We could include a clarinet because I was already experimenting with it, the guitar or give greater importance to the minor percussion. All to provide variety of colors to the sound, which will help identify further Salsa Mayor and mark a new era for us. ”

– Do you still have the perception that Salsa Mayor is better known abroad than in Cuba?

-I’m not so sure. Some years ago we did think that. But today we have achieved a place in Cuba. What happens is that there are other movements that have gained a lot of strength and we came up in a decade where authentic Cuban music, salsa, son … – was not in their normal levels of preference and we had to swim upstream.

“But I do think that Salsa Mayor is well known at present and even by the new generations. I do not think they are the same circumstances that some years ago. ”

You speak of the work of Juan Formell has influenced you, but there are other paradigms.

-Trova has marked me, especially Pablo Milanes and Silvio Rodriguez. It is something it shows less because as a different genre that from the one I defend. But undoubtedly, they are musicians that I heard as a child.

Now the tenth anniversary of the orchestra comes, already have in mind how you will celebrate it?

-We think that before that date we will have our seventh album. We will record, as always, in Cuba with the Planet Records label, and I have made some songs. We have other things in mind: a national tour that we will book for the second half of the year, and soon we will have a tour of the neighborhoods of Havana. We do not seek any profit with these tours, what interests us is that our audiences can see us live.

“Also foreign friends come to share with us this decade of work. We will meet on October 10 in the Lázaro Peña Theater for a great concert. There will surely be all the singers who have passed through the orchestra and there will be many surprises. “

Economy of culture in Cuba?