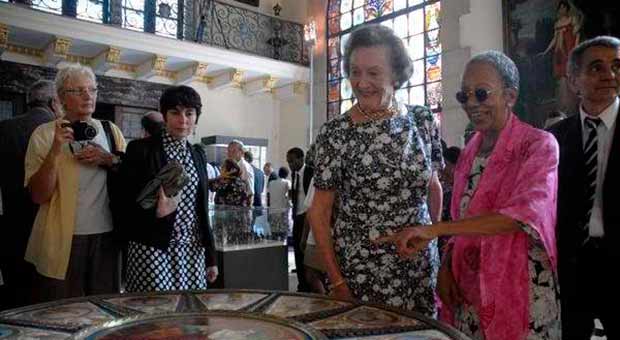 After Jesus, the figure of Napoleon Bonaparte is among the ones that bring out the biggest passions among collectors from different continents and generations. The conquests of the French general transcended the geographical , military and political fields and surfaced in culture and still live in many countries, even those that emperor never set foot on. That’s the only explanation for the International Napoleonic Society to choose Cuba to host its upcoming International Congress, an event dedicated to sharing research results.

To the surprise of many, this little island in the Caribbean Sea treasures one of the most impressive collections of Bonaparte, unrivaled across America, but Napoleon ties with the country are not limited to very personal and unique pieces as one of his cocked hats and spyglass, the death mask and a molar , among many relics. The links between Bonaparte and Cuba are only beginning to be revealed, or so thinks the director of the Napoleonic Museum of Cuba, Sadys Sanchez.

In the opinion of the scholar, the 12th International Congress to be held in Havana from July 7 through the 11 gives them the opportunity to show the world how close we have the ruler who sat down to eat pleasantly and share with his troops; however, he did not tolerate a Pope to crown him emperor. As they say, he chose to put himself the crown as a symbol of the will of the people. The man of small physical stature wove great stories that versions still multiply and a host of admirers devotes time and money to his study and confrontation.

She explained that the theme of the event: The Napoleonic revolutions around the world, will not interpose barriers to the central purpose of sharing for four days on the French impact on different countries.

According to Sanchez, one of the most interesting papers will arrive in the hands of a Chilean historian who proposed to analyze the Napoleonic military and political influence in Latin America’s independence.

The organizer of this year’s Congress on behalf of the International Napoleonic Society, Luke Dalla Bona, estimated that participants will be more than a hundred and lectures around 50, but the event holds more attractive things and mentioned as side activities exhibitions, galas and cultural tours of the west of the island. One of these, by the historian Orestes del Castillo, will show visitors some buildings built circa 1800 with clear French reference.

The Canadian scholar said that Cuba has one of the most interesting collections on Napoleon outside of France, and recalled that the last personal doctor of the Emperor, Francisco Antonmarchi, he moved to Santiago de Cuba.

The doctor accompanied the great conqueror on the island of Santa Elena till his death, then toured several countries and his attraction for tropical diseases brought him to Cuban soil where, by one of those terrible tricks of life, he died in 1838 as a result of one of the pathologies he was investigating, the yellow fever.

Antonmarchi marked the history of this Caribbean nation when he made the first cataract surgery known in the country and brought here the cast of the death mask he had made of Bonaparte moments after death, and the gold watch which marked the last minutes of the brilliant military strategist, among other valuable objects currently displayed in the Napoleonic Museum.

The director of the institution of the treasures highlighted a few strands of hair of Bonaparte and his own weapons given by he to other loved ones and the bedspread that covered him in his deathbed.

This magnificent collection emerged from the Cuban Julio Lobo’s passion for everything related to the French Emperor but they are not the only ones in the country, Sanchez said, confident that the set of objects gathered on the island will surprise visitors.

After nearly four years of renovation, the museum reopened in 2011 in a ceremony attended by the named Napoleon Princess, Alix de Foresta , widow of Louis Marie Bonaparte , Prince Napoleon, a descendant of King Jerome, younger brother of the legendary Emperor. The Princess certified the importance of the collection and donated a set of pieces of a dinnerware set gifted to his father by Napoleon as a wedding gift .

The 12th Congress will be sponsored by the Office of the Historian, the International Napoleonic Society, the French Embassy in Cuba, among other institutions, and beyond the conferences, it promotes a comprehensive program of tours, exhibitions, receptions and cultural galas.

Both Dalla Bona and Sanchez are excited about an exhibition of plastic artist Pavel Valdes dedicated to show in miniature French artillery at the time of the popular general, from academic research. Regarding the cultural events, they highlighted a presentation of the music the First Consul used to listen to, the result of a study carried out by a Cuban musicologist.

As a preview, the organizers announced that the 2015 Congress will be held in Waterloo, Belgium, for the 200th anniversary of the battle that led to the defeat and fall of the feared and cunning warlord.

In the XXI century, the famous Emperor has a legion of fans on the planet willing to cross seas, share and relive their world theories, which speaks for itself of the extent of his conquests.

Economy of culture in Cuba?