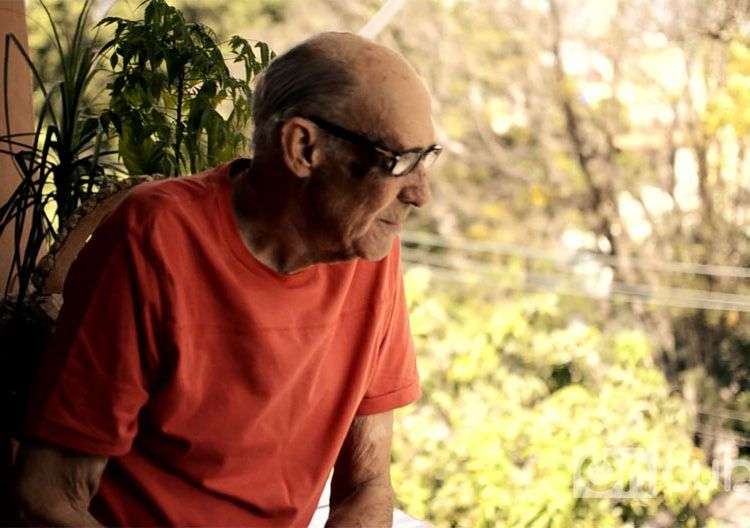 The day of the premiere of Esther en alguna parte (Esther somewhere), Reinaldo Miravalles entered Chaplin boosted by a tsunami of fans: impeccable in his black suit, he knew he was the star of the night. Before the exhibition began, the spotlights were focused in the last rows, and he greeted the crowd with fists, like a veteran boxer after knocking out a life that had beaten him hard in their final rounds. And the audience gave him a standing ovation, cheers as only the champions receive…
Because Miravalles is undoubtedly a champion of the show, with some of the most memorable roles in the history of Cuban cinema. On top of his memorable gestures, we also owe him essential phrases like that climax scream “Alberto Delgado Fuck … the Maisinicú Man”.

Personally, I think his stellar phrase in this film is, because it is unexpected and Cuban, “te la singaste” (Cuban slang for “you fucked her” that his Lino Catalá tells Larry Po, when he discovers that his supposed friend was actually working to take his woman from him, his Maruja…

Precisely, the Cuban identity of his speeches distinguishes Miravalles. In the cozy loft where he spends his days when he comes to Havana, the veteran actor assured OnCuba that he ever accepts a role if his lines are not credible. With a challenging “ha!”, he remembers when he got into a brawl with the producers of El misterio Galíndez (Spain, United Kingdom, Cuba, Portugal, Italy and France, 2002) because the talks were “garbish”.

“I have a rule that when the script does not convince me, I do not do it. Those initial discussions were very dense, and I argued with the Spaniards. In addition, they wanted to film in English and I refused because my diction would not be credible. I took the script and made it Cuban, and when the Spaniards read it, they went nuts. And so it was, “he said.

Still, although he was over 80 years old and nearly six decades as an actor, Miravalles sought for that film an English teacher and spent a month and two days sleeping just an hour a day, honing his pronunciation. That is rigor…

Admirer and friend of Javier Mendez, he confessed that for him, granting interviews is like playing ball. During his stay in Cuba for the premiere of Esther … he barely had time for his family, and continued receiving friends till he was almost leaving, or people who got to know him. In the midst of our conversation, the duo Buena Fe members came to greet him and sing the single Melesio was right, inspired by the character popularized by Miravalles on Cuban radio and television …

– How are you doing, maestro? – Israel greeted, followed by Yoel.

– You guys are Buena Fe? Jaaaaaa!

Miravalles asked about the recent concert in Miami, and Israel said, “it would have been an honor to have you at the concert.” Courteous and fast, the actor replied, “I would have been so happy.” Me too …

They told how they came to sing to Melesio, thanks to that “errant file” which is Frank Delgado, on the peasant reluctant to join cooperatives. Guantanamo guys, to say the least, the boys from Buena Fe were crazy for doing a changüí, and the story of that peasant gave them the base.

“Melesio was born filming in the Escambray- Miravalles evoked -with terrible conditions, just three dollars for lunch, and the character was a story in his life. Hearing people, one day I came across a peasant who gave me the tone I wanted. Well, in Miami people never call me by my name when they recognized me on the street, they always call me Melesio. ”

On one side quietly listening is Javier Mendez, ex-centerfield of Industriales and the Cuba team, and longtime friend of Miravalles. He tells us that when he was in Italy and got homesick he used to watch online El hombre de Maisinicú and Los pájaros tirándole a la escopeta (two films starred by Miravalles)

“Javier gave me a lot of joy in ball. I remember when I messed up a no-hitter by Rene Arocha, playing in Regla municipality. I spent some time divine, because people made ​​me crazy. In addition, Javier was the only one to play hard ball. Those boys, Javier, El Duke, played a beautiful ball, ” Miravalles said, Industriales unconditional fan, like all good Almendares fans …

Already slower, we talked about his health and the film that brought him back to Cuba. Before the screening to the press, when I asked what criteria he expected, he snapped at me “we will throw stones to those who don’t like it”, and let go one of his sudden laughter.

Seriously, he commented that he doesn’t feel like a star, just a normal human being, a Cuban who is satisfied, but without pomposity. Known for his versatility, he said each role entails a conflict, an attitude that it’s up to the performer to unravel. About Esther … he said it is very well written, easy to learn, and the conversation flows.

And how long will you act?

“Look, I’m happy to have gotten to 90 years in shape. I do not know how long I will film, because there are no longer stories for old people. Nobody goes to the movies to see the elderly, not even the Americans. This film was made for us, and I thank Chijona for having remembered me, “he replied.

How does it feel to return to Cuba?

“I left in 1994 for family affairs, and 15 years passed without me coming back, because I could not. When I was allowed I came, because I’m a parent, and my country is this. To be clear, I can live in any country, but my country is this, is Cuba,” he concluded.