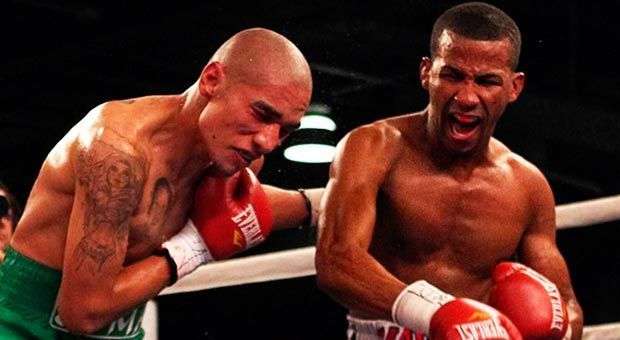 Just couple of rounds needed Cuban Rancés Barthelemí (20-0-0, 13 KO) to take over the universal belt in the super featherweight division of the IBF. The title fight was held last night at the Target Center in Minneapolis, Minnesota, home of the NBA Timberwolves. His victim was the Dominican Argenis Mendez (21-3-1, 11 KO), defender champion of the category. The decision of the contest: knockout in the second round.

Rancés , younger brother of Olympic gold in Athens 2004 in the 48 kg Yan Barthelemí , had become direct challenger for the 130-pound IBF crown on June 21, 2013 . That day he also beat in two rounds by KO Thai Fahsai Sakkreerin . Meanwhile, Argenis Mendez already had a title defense which ended in draw with Canadian of Afghan origin Arash Usmanee. It was thus the scene was ready made for the Caribbean duel Friday between Rancés and Argenis .

Since the beginning of the fight the audience at the Target Center could feel the superiority of the Cuban. Using his jab, combined with clever use of his greater range, were the keys that provided the excellent demonstration. Literally Barthelemí came to eat the Dominican and that provision had the desired effect.

The knockout came along with the sound of the gong that was ending the second round. This meant that the promoter of the evening, the former world champion Mike Tyson, ensure that Rancés had beaten his opponent when the assault had ended. “That’s against the rules and will submit a complaint to the State Boxing Commission. I cannot, however, doubt the victory of the Cuban “he said.

In an interview with journalist Jorge Ebro (El Nuevo Herald ) , weeks before this fight , Barthelemí had referred to the difficulties that the promoters and TV networks will impose the boxers of the island. “You do not know how you will look good. Cubans have extra pressure and are in the midst of a very negative campaign, which has made us great harm. Against Cubans there is always an excuse to fight them , to bring them forward ” … ” Look at Guillermo Rigondeaux . Every time they say he’s boring I feel it is a tremendous lack of respect, and I think here they do not know the good boxing. We must keep a cold head before such nonsense.”

Virtuosity and explosiveness shown by Rancés in this fight for the super featherweight belt to be guaranteed a momentary barrage of criticism and obstacles that continually mark the Cuban boxers. This victorious start in 2014 may prove a positive sign of the new joys that will come.