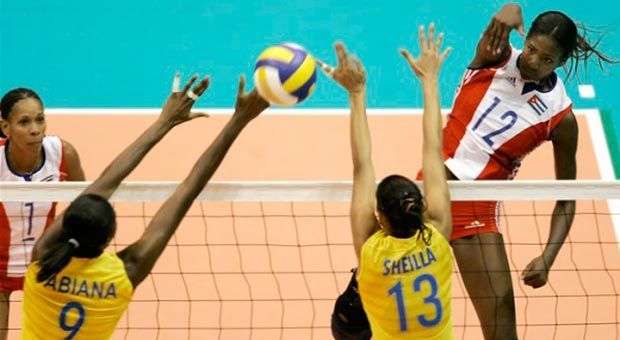 An article published in the Brazilian website Hoje em Día and some comments on the Las Espectaculares Morenas del Caribe Facebook group have aroused the interest of the followers of the Cuban volleyball. Motivation logical if you consider that in both cases, talks about the possible return of a group of volleyball players to the island’s national team.

Neither are official data. The remarkable thing is that they reflect a few essential details for that longed for return to become concrete. The first is that the Cuban Volleyball Federation is talking to several of the “Morenas” currently playing in professional leagues around the world. The second: the Brazilian article reviews the statements of two other volleyball players expressing their desire to represent the island again.

On his Facebook page setter Daymi Ramirez said directors of the Cuban federation called her and proposed her to return to the national as captain, in addition to talking about the possibility of the return of two other former colleagues. So far everything looks great but … Daymi further noted that the main problem was that the conditions for return were not clear yet.

A source near Daymi revealed the root causes of this uncertainty: “I come from Cuba now where we discussed the situation of women’s volleyball, and the heads of the sport on the island have told me they cannot guarantee anything … and that is my big concern. The issue I have clear … they already called stellar figures and the question of “can we keep playing freely in the foreign leagues?” had as response total silence. ”

As expected, therein lays the key point. Will athletes maintain their professional status if returned to the Cuban team? The momentary silence from the federation suggests that they still have no idea exactly how to handle it. That in the best of cases. Hopefully that silence doesn’t hide a possible negative, because it will derail any effort.

Regarding the article published in the Brazilian newspaper, journalist Felippe Drummond says that since the entry into force this month of the new remuneration policy for Cuban athletes, adopted in September 2013 that included the possibility that these can be contracted in foreign professional tours, the return of the men’s volleyball to the World Elite must happened.

In that sense Drummond interviewed two stellar capital’s spikerss: Yoandy Leal and Oreol Camejo, who are active today in clubs Sada Cruzeiro and Lokomotiv Novosibirsk of the Brazilian and Russian leagues, respectively. These were their words:

Leal: “On paper it will be a very strong team. In practice it will not be so simple. To get a good team they must train together and form a group, so we have to get together soon, next year, be ready”

Camejo: “It will be great to finally bring together the best players in the selection. I cannot wait to play with Simon, Juantorena …”

OnCuba spoke via internet with both players and they confirmed their desire to play with the Cuban team but … like Daymi Ramirez said, they acknowledged that nothing is certain so far as the conditions of the federation have not been clear.
Respect for individual interests and the Cuban volleyball leadership will be the key to the story written by the sport gets back on track. There are issues that must be addressed clearly. This must be done on the basis that players can continue playing in foreign clubs. Does the federation bet by accepting to have a dialogue with all athletes or will keep excluded that in its opinion caused a drop in team performance when they left? The return of the athletes will be based on the Olympic cycles? How is the issue of taxes volleyball players pay in the professional leagues? Would such tax be used to benefit the development of our volleyball from the base?

The qualifying process for Rio 2016 is at the door. The dream of the fans to see their icons wearing the shirt of the four letters does not want to wait any longer to materialize. Even the volleyball world also wants Cuba again taking its rightful place. The following comments from Brazilian coach Bernardo Rezende and several athletes from that nation speak for themselves:

Rezende: “With the return of so many elite athletes who could not play for Cuba for sure they will have a selection capable of winning it all”

Wallace de Souza: “Return them to the Cuban team will be optimal for volleyball that will be more competitive”

Eder: “We have seen these players shine in the entire world … they will form an extremely strong selection”

Willian: “It will be good for them that will have players that will give a lot of depth to the team.”