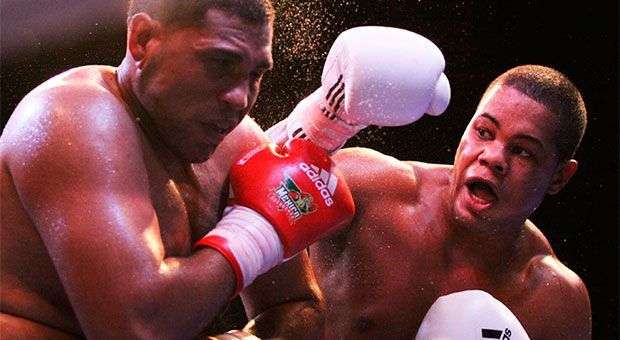 The Domadores of Cuba swept the Mexican franchise Guerrero in his second appearance at home in the Coliseum of the Sports City. This result ensured them a place for the next phase of the IV World Series of Boxing (WSB), while there are still missing several qualifying matches. Now the fighters of the island accumulate balance of 26 wins and just four losses, and with 18 points remain as leaders of the group B.

Again the trumpets from the ballparks were felt in the stands of the Coliseum and the occasional whistle at the passing of models that announced the early rounds. The opening of the evening was by the singer Laritza Bacallao, that at the rhythm of “carnival and drums ” left the scene ready for the sixth consecutive win by the team led by Rolando Acebal .

In the bout that started the match Gerardo ” El Gallo ” Cervantes ( 52kg) outscored Huitzil Orlando 3-0 by unanimous decision ( 50-45 , 49-46 , 50-45 ) . Cervantes took advantage of the constant exchanges that marked the five rounds, hit more and more effectively. His work with the left hand, particularly hooks to Huitzil abdomen was exquisite. “In this, my third fight, I felt good … a little exhausted at the end because the Mexican was very strong, but I already knew him from prior preparation to WSB when we celebrate several sparring combats,” Cervantes said.

Flashing and confident, are ideal adjectives to describe the actions of Lazaro “Prince “Alvarez (56kg). After a first round resolved in his favor without much wear, alternated with other mediocre rounds where he displayed his exceptional skill. In the end the verdict was 3-0 (48-47, 49-46, 48-47) against Raul Curiel, an 18 year old fighter which validated his status as world youth runner up, offering a stubborn resistance to the Pinar del Rio fighter. This was the third win for Alvarez, who tied with Yosbani Veitía (49kg) and Erislandy Savon (91kg) as the top winners of the Cuban team to date.

A wound in the left eyebrow of the Mexican Héctor Reyes sentenced TKO victory for London 2012 Olympic champion , Roniel ” Unstoppable ” Iglesias (69kg ) , on his debut in the World Series. During the four rounds in which there was action on the ring, Roniel hit consistently accurate and his rival, who could do nothing to the effectiveness of the hooks and straight launched by Iglesias. “I still have not become optimally, the opposite of today was not the best quality so I must keep improving. Like I find myself ready to take on new challenges, “he said.

Another debuting in the WSB was Emmanuel “Prophet “Reyes (81kg), substituting the star Julio Cesar Cruz, who continues to recover well from the wound received in an attempted assault. The capital boxer served by winning 3-0 (48-47 , 49-46 , 49-46 ) before the Moldovan Pietru Siobanu . “I got the opportunity to stand in for a great companion and I knew how to take it. I felt confident in the ring with the support of this beautiful public, which I thank, “Reyes said.

Eager to leave behind the memory of the defeat in his first appearance in the WSB, Jose Angel “Panther” Larduet (+91 kg) beat badly Puerto Rican Gerardo Bisbal, another reinforcement that Guerreros brought to Havana. The scorecards were a clear signal of what happened on the ring (50-43, 50-43, and 50-44). Easy win against an opponent that since the second round was physically exhausted and was content to stoically endure the barrage of punches that Larduet prescribed him.

The five victories achieved by the Cubans yesterday completed the sweep (10-0) against the Mexicans. The next match of the Domadores is agreed to on January 31 before the Hussars of Poland, also in Havana.

New regulations authorize the expansion of distribution of land in usufruct