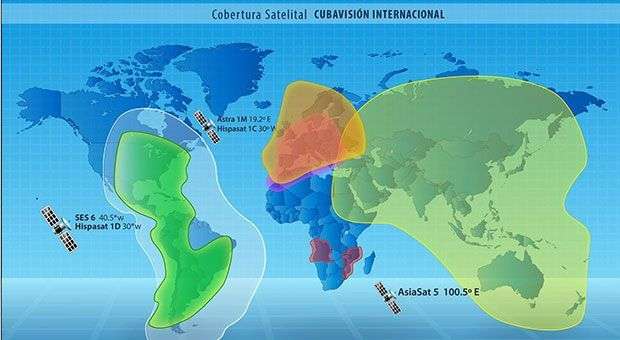 The signal of Cubavisión International ( CVI ) – the only Cuban channel that transmits via satellite to the rest of the world- will begin airing this March 23 in Angola and Mozambique.

With the inclusion of these two Southern African countries, Cubavisión International is distributed in 56 countries , with a presence in America, Europe , Asia , Oceania and Africa. On this continent the Cuban television channel already reaches the region of the Maghreb: Morocco, Algeria and Tunisia, and may be seen by over 6 million subscribers via open digital reception in these 3 countries.

The coverage of the Cuban signal in America is done through 849 cable operators and a university channel that enables distribution in 22 countries through the SES 6 and Hispasat 1D satellites, to a total of more than 7 million subscribers.

CVI is distributed via satellite AsiaSat 5 on the territory of the People’s Republic of China through a network of hotels and other institutional clients and can be received by operators in Asia and Oceania. In this region the signal reaches 274 facilities located in 24 provinces for a total of 157,982 rooms.

In Europe CVI is distributed through two satellite operators: OVERON (Hispasat 1C) and SES ASTRA (Astra 1M) that serve digital platforms, cable operators and IPTV operators, for a total coverage of over 33 million subscribers in 28 countries.

CVI signal is transmitted in the open; this means it can be received without any restrictions, provided they have the technical conditions for reception.

The official launch in Angola and Mozambique has particular importance to Cuban television not only to respond to its distribution strategy but because both countries are linked to the origins of the channel.

In 1986 this TV channel emerged, with the purpose of providing information to the fighters of the island, which were deployed in Angola. The Cuban collaborators abroad, diplomatic missions, among other receptors, benefited from this communication. But at the beginning of the 90s, with the collapse of the socialist bloc, the Soviet satellite that housed the signal for the south of the African continent was interrupted.

Currently there are 236 Cuban collaborators working in Angola in the areas of medicine, education, hydropower, fisheries, tourism, information technology, construction, agro-forestry, epidemiology, malaria and the literacy program “I, yes I can.”

(With information from the official website of Cubavisión International)

"I really think this conference in Miami, without threats or police deployment, is a sign of change”