by Yenys Laura Prieto
in Culture
0 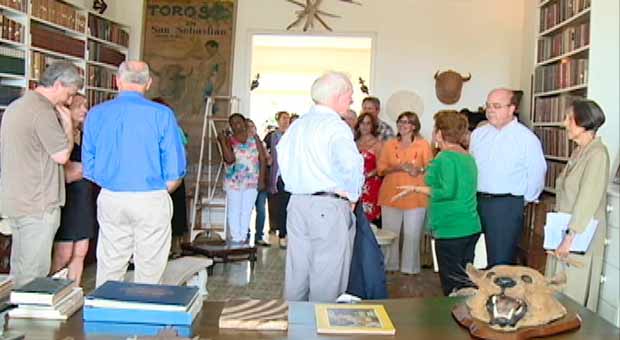 From his second journey to Africa Ernest Hemingway brought with him a lesser kudu skin. He would write barefooted on it, in his room at the Vigia farm, as a token of good luck. It is impossible to know for sure how that antelope skin may have had a bearing on his luck, but there it remains, lurking around curious visitors, apprentices, museum researchers, storytellers, and myths. It is also impossible to know if some of the participants at the signing of the First Cooperation Agreement between a group of US activists –Vigia Foundation- and the Cuban National Heritage Council on November 2002 had previously walked over the animal’s tanned skin.

It was a very complex context between both nations and to think that a cooperation agreement invited many pessimists. The truth is that day Hemingway’s luck began to change; the luck of a Hemingway spread among Balzac and Benito Pérez-Galdós books, epistles, spiritual jazz records and classic music or numerous hunting trophies; a Hemingway of multiple forms, human, magical and brutal.

James McGovern doesn’t look like Ernest, or any of his trophies. McGovern is a democrat congressman from Massachusetts. James one day took the challenge. He arrived for the first time in Havana in 1979. He signed a joint project with Fidel to preserve Hemingway’s legacy. He believed in the need to preserve the history of this author and talked about “bringing down obstacles”. So, he arranged with the US government a license for the agreement. Some of his colleague congressmen didn’t understand him. Eleven years after, McGovern explains us: “This we have just made is evidence of what we are able to share and achieve in cooperation. Rather than a project for the preservation of documents, this is about showing how two peoples with so many differences through history can dialogue to do something in collaboration for the benefit of both nations. There are no reasons for Cuba and the US not to normalize their relations”.

This is also the line of thinking of Jenny Phillips ever since she became interested in the imprint of this writer in Cuba and met the Cuban people. Jenny Phillips’s relation with Hemingway is almost by blood. Her grandfather, Maxwell Perkins, edited a difficult writer that usedto write by hand and only typed dialogues and was not fond of any corrections. The same writer he had been lost with in an island, the same one that was declared dead after that escape to the urban world. At the head of Vigia Foundation, Jenny handles many experts that have contributed with the work for preserving the pieces of the collection. She believes that the work in Cuba has been “a lifetime experience, because whenever I was feeling doubtful I had the support of Marta Arjona with her singular mastership and wise encouragement: there’s no time to lose if you want to do something”.

Since 2003, delegations of specialists in different fields started to arrive and they have contributed with their visions to the graphic museum; those are: Susan Wrynn, writter Scott Berg, architect Lee Cottand Henry Moss, doctor Stanley Katz, Bill Dupont, Patricia O´Donelland Walter Newman.

Nowadays, this museum has witnessed a digitalization process of more than 4500 images, documents and books with some notes by Hemingway, which will guarantee the preservation of a considerable share of this institution’s heritage.

In this place there are unknown stories still to be figured out like the missing letter he wrote to his editor which Perkins’ wife treasured and still remains hidden.

Today, preservation works continue at the Vigia farm because this is a never-ending task. But it isn’t about an agreement, a museum, hunting trophies, or Ezra Pound classics collection, or The changing face of beauty, or The letters of Thomas Mann, or The autobiography of Mark Twain, or Fandango Rock or Hamish Hamilton and his Poor no more. Optimists might say it is about a window, a path, a light perhaps. According to McGovern “it is impossible to change the past, but it is definitely possible to have a bearing in the future”, though sometimes one might have to bring back from fishing at least a fish bone.

"I really think this conference in Miami, without threats or police deployment, is a sign of change”

"I continue urging President Obama to change the policy towards Cuba"