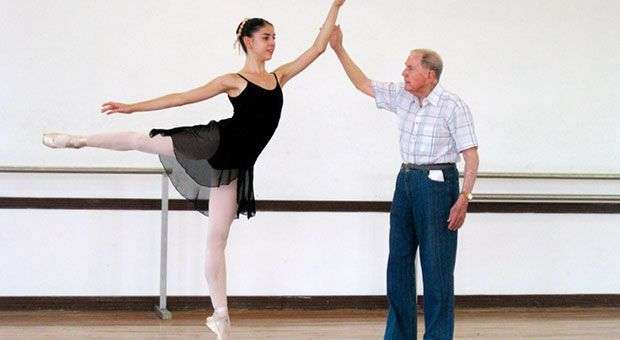 The genius by Maestro Fernando Alonso still lightens the Cuban ballet scenario he founded. It wouldn’t be fair to say he founded it alone because that would be a delirious lie and would be disrespectful to him when he used to name with admiration all those people with which he shared this never-ending process.

“Dad was a lord, a prince. He was incredibly intelligent, he could talk about anything, he knew a bit about everything and he used to study the unknown”, pointed out his daughter Laura Alonso, prestigious ballet maître and director of Prodanza Center.

The former soloist of the Cuban National Ballet (BNC by its acronym in Spanish) recalls that once during a matinée performance they staged The Sylphs and it didn’t suited the director. The evening show began with that same piece so the maestro had them rehearse with their dance shoes on, dressed and with the make up on the whole afternoon until the show was about to begin.

“When I took my dancing shoes off, my feet were bleeding, however no one dared to complain, everyone respected him a lot. Dad was very demanding but that’s what teachers do and he would never settle, he used to go deep into the roots to know the reasons for anything”, said the dancer in her office a few days ago to my friend Maiuly Sánchez, who was trying to help me build a short audiovisual material to show the new generations of dancers who the father of the Cuban ballet school was.

We had scarce resources, honestly personal resources, but we had to answer this call by the director of the National Ballet School, Ramona Saa, who also treasures lots of anecdotes with Fernando: “After I taught for the first time an open class at the Auditorium Theater, for first year students, Fernando tore it apart. I cried because I thought he would say to me it had been spectacular, but eventually I realized that way he turned us into what we are today”, she noted in reference with a golden generation of the Cuban ballet forged under Alonso’s guidance.

According to Cheri –as people refer to Sáa-, Fernando never taught a lesson sitting, during his youth he used to teach by the bar and then, he used to do it from the center by marking the steps of exercises.

He passed away in July, 2013, at the age of 98; however, the director often looks at the halls of the School and she has the impression that she can see him walking to a classroom. Regardless of the fact that the Cuban press media didn’t highlight his work, he never lost his link with the institution and till his last he counseled dancers and professors, and monitored rehearses without asking for anything in return.

“He always cheered us up, shared his views and knew how to get to people”, she noted with a hand in her heart and added: “I miss his opinions, I really miss them”.

When the first dancers of the Cuban National Ballet, Viengsay Valdés, studied at the School, Fernando was directing Monterrey’s Ballet in Mexico, so she had to wait for a few years to meet him and she made the most of it when she finally did. “He offered logical corrections; he used the psychology of dancers to make them understand the reasons for anything. Just a few professors have the gift of explaining things right, and in this regard he was wonderful, explicit, and that’s something we miss and something that I need as a professional”, stated Valdes, who puts into practice the Maestro’s advice when she dances.

“Thanks to Fernando’s demands, the company achieved international recognition and awards during the 60’s and 70’s”, noted the artist. Not much is said about him as director of the BNC since its foundation till 1975, when he divorced from his first wife.

One of the gems of the BNC, Aurora Bosch, recalls the times when the Maestro led the first generation of the company. “While he trained us as dancers, he trained us as professors as well. We daily had a lesson on applied anatomy: look, you have to rotate the femur, which is inserted in the acetabular fossa and we looked at him in amazement, then he taught us anatomy and he used to draw our bodies”, she confessed.

Bosch also talked about Fernando’s thorough work when he trained her and other young girls during the 60’s to participate in Varna’s International Contest, in Bulgaria, where several experts noted for the first time the emergence of another ballet school in the world. “It was a beautiful opportunity to get close to him and polish every detail, which was really hard. He used to say: ballet lessons are collective, but the professors have to look individually at his students and not underestimate anyone”.

In his honor, Bosch proposed at the 8th Congress of the National Association of Cuban Writers and Artists (UNEAC by its acronym in Spanish), held in April, to name the National Ballet School after Fernando Alonso. The answer to her proposal was a closed instantaneous ovation by the audience.

In the opinion of one of the youngest students, Grettel Morejón, Fernando was as sweet as demanding. “My group at school had a lot of respect and affection for him because he led you to love dance. There are people that change your life, and he played an important role in mine, he changed my way of perceiving the world and dancing. He started lessons at 9:00 am and end it at 2:00 pm. Lessons are arranged to last 1 hour and 30 minutes, but he could turn it into a three hours lesson and no one noticed the time”, said the principal dancer of the BNC.

Grettel met Fernando when he was passed the age of 90, but fortunately he was still able to climb the stairs of the school in steps of two, he was capable to thoroughly narrate pieces or events in detailand in more than one occasion he had her as partenaire in a classroom. He often called his students, he met with their families and he was aware of everyone’s feeling and emotions.

About that time he also met Professor Elio Velázquez, who thinks of the Maestro as the first physical trainer of Cuban dancers. “He loved body training and was definitely a role model to follow because even at his age he could do sit-ups, work at the gym, and tried hard to be in shape”, he explained. More than once Elio offered him a hand to help climb a step, but he always had the same reaction, as if offended. The only hand allowed was hand shaking.

Elena Cangas, ballet professor from ENB assured that they mention him everyday. “His presence, his legacy, his imprint, is everywhere in the school. He is not physically present but he is always there, and those of us who were lucky enough to walk by his side will never forget him. He was sweet and he was incredibly wise to speak so little about him”.

This statement gains meaning when looking at Alonso’s life and work. Cuban culture is still in debt with Fernando. The recently concluded 20th International Meeting of Ballet Academies was dedicated to him. During an Homage Gala, Miguel Cabrera, historian of BNC, shared a piece of his private relation with this Maestro without making reference to their positions, responsibilities and references that characterizes every historian. That was not necessary, the details were provided a few minutes later by Fernando’s students. Time was not enough to say it all, but at least the veil on Fernando started to draw back.

The legacy of a dance master usually lives on in the genius and spirit of dancers and their most perfect pieces. However, when the character of a professor founded dancers, a company and a school, oblivion is just unforgivable.