Exvotos and future offerings from Ibrahim 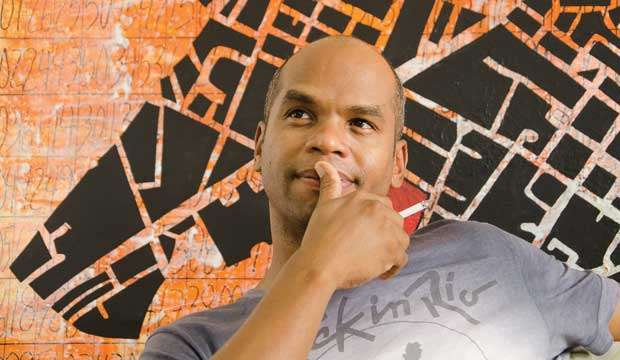 His show, Exvotos, includes paintings, engravings and installations, art that he produced between 1993 and 2013; it is a look back at his rising creative work from the last 20 years. “There is a little bit of everything and it’s a way of showing me myself within my own memory, and recounting or telling a story, or perhaps a fable, but with an autobiographical character,” he says.

Last year, Miranda held an exhibition with Douglas Pérez, Dos ciudadanos de Utopía (Two citizens from Utopia) at the 8th Floor Gallery in New York. It was a very well-received show that got him access to other spaces, such as Art Basel Hong Kong. However, its most relevant aspect was that it was a clear acknowledgement of Mapas y Mapaglifos, a series in which he externalizes his personal views of Cuba and insularity. Dos ciudadanos de Utopía included a large installation that, with some changes, will be part of Exvotos, and it will be the first time it is shown in Cuba.

Exvotos has a precedent that goes back to 1993, when Miranda, as a recent graduate of the Higher Institute of Art (ISA), lived in Mexico for more than a year. There, he produced many works of art that have never been exhibited in Cuba, and that are part of his personal patrimony. “I began to soak up another culture there, one that enticed me. Mexico is a powerful country in folkloric and cultural terms.” Now, the El Reino de Este Mundo gallery, a space that represents and supports memory, archives, chronicles and records, is the perfect venue.

“My work functions like a chronicle. It investigates anthropology and various viewpoints on folklore without stereotypes, and the library, as a place for archives, records this type of knowledge. I had an explicit need for communication between the concept exhibited by the library and what my work requires.”

One characteristic of Miranda’s artistic creation—his work can be found in institutions like the MoMA, the Museum of Modern Art in New York, and the National Gallery of Art in Washington, in the United States; the Van Reekum Museum, in Appeldorn, Holland; the Museo de Gravura, in Curitiba, Brazil; and Havana’s Museo Nacional de Bellas Artes; as well as many others—is that he works in series, and they are closely related to the literature that he consumes and whatever research he is immersed in at a given time. For example, he pours his life and everything that happens to him into the Mapas (Maps) series: “everything that I am absorbing and externalizing; it could work as a personal diary converted into images.” And in Mapaglifos, he concentrates on questioning the urban utopia. On the other hand, Cubrecamas (Bedspread) focuses on domestic matters.”

Ibrahim is convinced that the island of Cuba is an eternal metamorphis and that “we are the sons and daughters of cultural recycling. If we didn’t live in a perpetual, daily state of recycling, we would not survive. That is why I believe that the idea of Cuban insularity and identity are marked by constant change. My island is constantly mutating, and it adapts to all times, all highs and lows, to my love, lack of love, depression, chronicles, poetry…that is my language. It is a type of humanity exposed, simply.”

He does not agree with the idea of being pigeonholed into a certain generation—although the experts say that while he belongs to the 1990s, in certain aspects he has inherited the 80s. “I don’t like the idea of generations; that is something that time and history will decide. I’m sure many will remain on the wayside and others won’t. Who am I to say whether I belong to the 80s or the 90s? Maybe tomorrow I’ll begin making my most transcendental work, and that will be my time. There’s a tendency to classify things, but I’ll leave that to the critics; I do my work, and if the scholars want to define it, let them. I define myself in another way: working and holding exhibitions.”

With Exvotos, Ibrahim brings us closer to his particular world view of art, inviting us to reflection from the starting point of his imagination—which is not at all naïve or impartial—while at the same time planting his flag and summoning us, inciting us to new and future offerings.

Santa Clara, thanks to Remedios

The Fiesta del Fuego is back, this time to the beat