Martica
in Technologies of Communication and Media
0 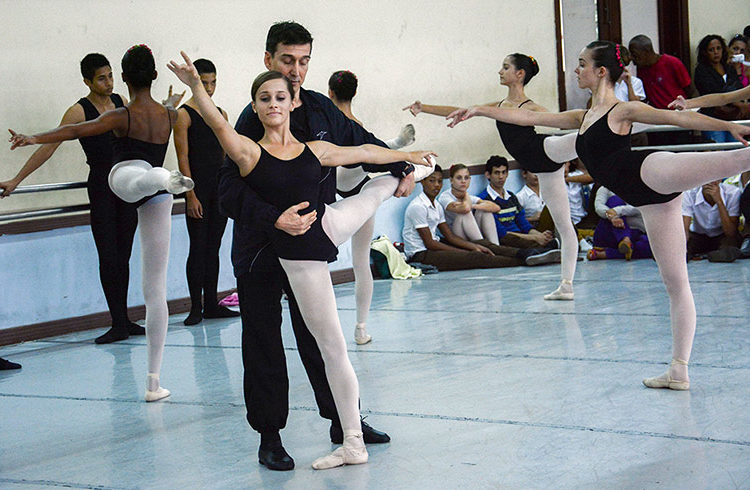 One of the stars of dance, the Argentine Julio Bocca, fulfilled his promise to return to Cuba and if previously we witnessed his stage performance, now, after he retired from theater, we can attest his worth in another equally relevant manifestation. The acclaimed artist gave some advices to the new generation of dancers after teaching a master class for students of the National School of Ballet in tribute to the great Cuban pedagogue Fernando Alonso.

Bocca invited the trainees to make a difference from the heart, take the most of the music, learn to know your body and seek good relations with peers because you almost never go up on stage alone.

The next day, the winner of the Benois Dancing Award in 1992, considered the Oscar of this manifestation, joined as a dancer to the class given by the teacher Lázaro Carreño at the National Ballet of Cuba. All there admired his simplicity and when he was asked about the future of ballet, the director of Uruguay’s national company called for Latin American union between institutions and theaters to make co-productions favorable for all.

“The idea is not so easy to carry out as I thought four years ago but we are taking the possible steps today,” the artist, who is trying to place his company in a top position on the continent since his promotion to the direction on June 2010, by appointment of Uruguay’s president, José Mujica, said.

The designation after his scenic retirement changed his life, and allowed him to start a new career and enjoy pleasures like home peace and quiet.

” For the first time, I live in a country for a whole year , because I used to spend my life traveling the world to perform at numerous galas and festivals, I had many invitations and now I enjoy being at home, take a glass of red wine and watch the sunset facing the river, “he confessed.

However, in coming weeks he will not be so quiet as he will receive an award in the United States, prize granted by the Washington Ballet, and he will also attend a meeting with the municipal companies of Rio de Janeiro, Brazil; Chile and the Colon Theatre in Buenos Aires, Argentina. He hopes to implement collaboration and that other companies to participate of the project into the future.

The National Ballet of Uruguay, nicknamed Sodre by the initials of the company that created it, will turn 80 in 2015, and according to its director, to celebrate such date they will dance the versions of Coppelia, Giselle, a mixed program of contemporary and classical pieces, a choreographic premiere and a special gala with guest artists on November 24, the day of its founding.

To close the year, the company will perform for the first time Romeo and Juliet, choreographed by Kenneth MacMillan and in 2016 it expects to stage another classic of the twentieth century as Onegin by John Cranko, in addition to the version of Carmen by Spanish creator Goyo Montero.

The director aims to keep the classical line of the company and simultaneously cultivate a good contemporary basis because “today’s artist must be complete, know how to behave in all styles with similar excellence.”

As a dancer, Julio was a whirlwind on stage, big jumps, numerous twists and passion gave his Latin blood away, but he was always worried about art, not just technique , so he seeks his dancers to receive drama classes to create a consistent character and keep it throughout a work.

“There must be something more than just technique, a feeling must occur even though the dancer just walk on stage,” Bocca, who during his career undertook seven operations without giving up the commitment of growing as an artist, said.

Just when he was recovering from the first surgery, after winning the gold medal at the International Ballet Competition in Moscow (1985), he received a call from the famous Mikhail Baryshnikov, who invited him to join the American Ballet Theatre ( ABT). His contract as leading dancer of that company since 1986 allowed him to perform in the great pieces of universal repertoire, but the chance to debut in the classic Swan Lake was given in Havana, that same year, during the ninth International Festival. The show beside the Cuban prima ballerina Ofelia González became event still remembered by lovers of ballet in this Island.

The virtuosity that Julio sported, with a marked Latin character, earned him invitations by Danish Ballet, the Bolshoi, Mariinsky, La Scala in Milan and other institutions in Venezuela, Japan, France, Canada, among many. Bocca was part of ABT for over 20 years and shared the stage with female stars like Nina Ananiashvili, Susan Jaffe, Julie Kent, Natalia Makarova, Amanda Mckerrow and Alessandra Ferri, with whom he formed a legendary duo.

In addition, he ventured into musical theater and in cinema in 1998 when Carlos Saura invited him to perform at Tango. “I almost win an Oscar,” he exclaims laughing when remembering that the film was nominated in the category of Best foreign language film; he also received a nomination for the Golden Globe Award, two nominations for Goya Award and the Technical Award at Cannes Film Festival, in France.

Bocca´s last show, happened in Buenos Aires, was attended by 300,000 people; however, he says he does not miss the stage. The relationship with the audience is still vital and it is one of his areas of work in Uruguay to fill the theater and spread the love for art. To this end, he holds national tours annually and free performances in poor villages and rural schools.

“Promoting integration of a person through arts is satisfactory, children do not necessarily have to become dancers, the ballet performance offers a very complete range of music, lights, staging, design, costumes, make-up,” he noted.

In addition to the successful attempt to regain public ballet, which was lost in years of neglect, Bocca propitiated the staging of essential classics such as Swan Lake, The Corsair, in the acclaimed version by Anna-Marie Holmes, the famous composition La Bayadere by Natalia Makarova, as well as pieces by George Balanchine, Nacho Duato, Anthony Tudor, Jiri Kylian and William Forsythe, great choreographers.

The dance critics rightly speak of a new golden age of ballet in Uruguay and, after appreciating the caliber of two of Sodre´s leading figures, Ciro Tamayo and María Riccetto, at the 24th International Ballet Festival of Havana, no one doubts about the re-emergence of the company. Julio Bocca remains a star from any position he assumes.

Corruption and its Weeding Out