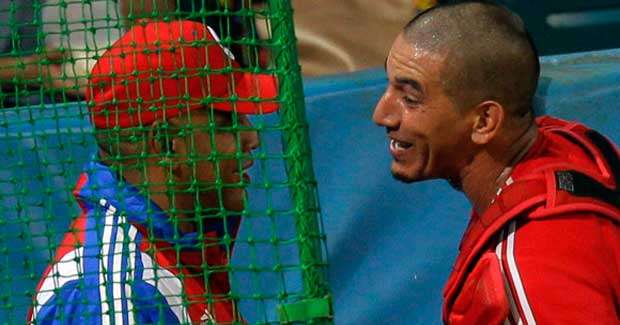 Victor Mesa and Ariel Pestano stole headlines at the end of the series. But let us not just focus on the field. We would all agree that, despite the emotions, there hasn’t been throughout the playoffs a soap opera more delicious than the hilarious press conferences. It is the intent of a country to go out of dormancy. No matter how ridiculous they look, how bad they are organized, we must keep them at all costs, one day we will have a culture of debate and dialogue as it must be.

The worst errors of Victor Mesa are not technical. He is a leader, strategist, and protagonist, incurs occasional on controversial decisions, but led a lower team, full of shortcomings, to the discussion of the title, and there will be not a critic, no matter how thorough in dissecting his mistakes, which can deny such merit. There’s nothing you can do about Victor Mesa himelf, nothing to erase or deny the good that he has meant to Matanzas and, as things stand, to Cuban baseball in general.

True: there is nothing he can do against himself, but gosh, he has certainly tried. His continued and misguided statements, his excessive outbursts and his pride, are no longer a superb charismatic but arrogant superb, heavy, indefensible. He has managed to instill fear in reporters and answers what he wants, in the tone he wants, the day he wants. A little attention to his words evidence that he has been at odds with the media, and Cuban baseball reporters seem nonchalant, slightly experts that do not even know what to say.

Every time they have asked something he doesn’t know how to answer, something involving a questioning, Victor Mesa has been bombastic and furious, and has gone out on a limb. Journalists are shipped with outright denials, kicked away from the microphones. However, they are still demonizing him, and Victor is not a demon. He is, despite the dangerous autocracy exercised right now, one of the few living things in Cuban baseball, and we must safeguard him soon. The National Series will spoil Victor Victor Mesa before Victor Mesa fixes the National Series.

Ariel Pestano, meanwhile, has amply demonstrated why he is the best Cuban, and among the first in the world. I enjoy the precision and intelligence, his absolute mastery, his pompous arrogance. When he retires, it will take years to have a catcher in his class again. In recent seasons, he had begun to despise. He sunk in the literalness of our ball, almost any amateur valued and its usefulness must, almost hidden. As David Schonfield, ESPN commentator, said, referring to Yadier Molina, “The art of managing a game behind the plate is the more subtle of attributes a catcher can have. The leadership required to help the confidence of a pitcher is certainly difficult to identify.

As contradictory as it sounds, Victor had to return and exclude Pestano from the Classic roster for us to remember the weight of his worth. In fact, not us. Victor Mesa had to come for Pestano to remember who he was and leave aside the indulgence of spoiled children. But I would have scared him just a little, enough, never had such severe punishment imposed. We can disagree, but I fear that Cuba did not advance to San Francisco, and looked so inconsistent pitching, because Javier Galvez remained in Mayabeque and, above all, because Pestano was not there. There is not an expression of virtuosity in the current Cuban baseball exercise comparable to his catching. Or maybe yes, the zeros of Freddy Asiel Alvarez, but if it were not for his catcher he would have had an earned run already.

Last Saturday Pestano attended for the first time one of the conferences (always public heroes go, not think tanks), however, he did not speak a word. He said he was there for a matter of discipline, but had no opinions about anything. I think very worth on his part to maintain a position until the end, showing that he is the best of Cuba, and now, with the success, the journalists are paid with the same thing when he was defeated, I mean, with silence.

Pestano is upset with the press for just the opposite which is annoying Victor. Pestano, because at the time was forgot like a common athlete, and Victor, because he is mentioned all the time. Both, in turn, illustrate a widespread belief. The journalists, due to the bad joke that their trade has become, do not enjoy any social status or an ounce of credibility, so anyone thinks he can make them feel as no one. Victor probably behaves increasingly brazen because someone reads him daily, the string of petty and poorly written, the amount of garbage critical blogs and Facebook profiles Cubans (not all, but most) write about him.

One gets bored of always reading the same analysis on the same empty spot. The topic has been exhausted, but as Cuban journalists cannot talk about anything, not even in their private journals, they continue to prey on Victor with bitterness. Victor is the receiving end of all the rage and impotence of years, and it seems, if we go by digital sites, that Victor is not just a baseball manager, but the one to blame for our economy, optical fiber cable, bad literature, corruption and bad harvests, all together.

There is a point no one seems to have noticed, and at least to me it sounded dangerous. After the seventh game against Sancti Spiritus and Matanzas, they asked him about Villa Clara, on his leadership and controversial methods, and the thorn that brought a duel with his former team, a province where Victor is a legend.

He replied that his only thorn was with the Americans, and that baseball was a way to defend our homeland. There was not writing anything about it. Sure, it’s a sensitive issue that outperforms Victor himself. He does not know what he said, but that cheap nationalism, patriotism per se that is the basis of decadent politicization that considered traitors Cuban ballplayers in the Major Leagues. It’s the sad sport subversion and ignorance of its essence.

A thorn with the Americans? What have players from the United States done to us? If Cuba were to have a thorn in someone, it would be in Japan, and particularly with the Netherlands, especially Victor Mesa-, but not with the Americans, the poor guys, who have not even reached the finals of a Classic.

We have to be careful with the symbols, with metaphors. Some deserve that we apply a strict literalness. If baseball was a way to defend our homeland, then we would have played ball in Bays of Pigs, and problem solved. For now, let us not get confused. Press conferences, and the final playoff, are basically a classic script, with two pristine contenders. One from the talkative, the other from silence. Victor and Pestano. Or Achilles against Achilles. Much remains yet to have in Cuba a hero like Hector.

It changes (Cuban cinema) everything changes

The Cuban Vision of Baroque Comes to Barcelona

The Cuban Vision of Baroque Comes to Barcelona

Urbano and the cocoa giant ball

Much more than longings