Malayerba: Instructions for embracing the theater

by Diana Ferreiro
in Technologies of Communication and Media
0 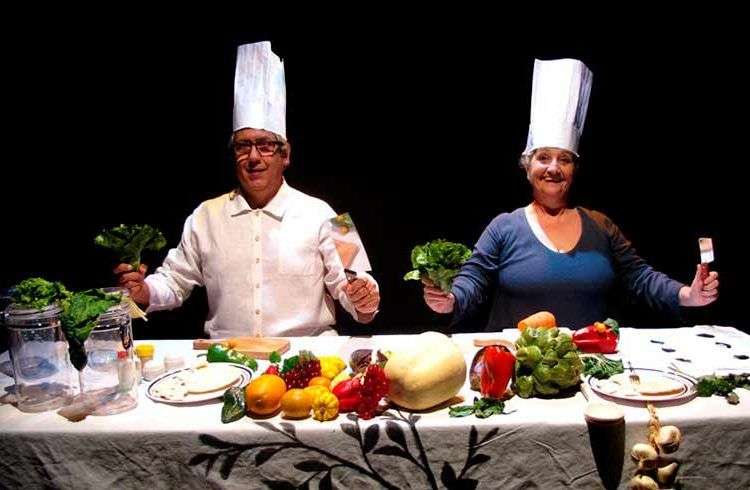 For continuing loving each other, he and she narrate the same story everyday while trying to recall the house where their granddaughter went missing more than 30 years ago by an infertile lemon tree.

The house, which was shot dead, hosted an underground printer’s behind a wall that used to transpire ink, a couple expert cooks in pickling brine rabbit, a girl that used to prepare escalope and two little girls. It was in Argentina, during the dictatorship, and the grandmother’s name was Chicha Mariani. The search for that little girl, the hope, the Plaza de Mayo and the pain, will keep them alive during the play.

Instrucciones para abrazar el aire (Instructions for embracing the air), by Ecuadorian theater group Malayerba, put an end on Sunday to the tenth edition of May’s Theater Festival in Havana. Arístides Vargas and Charo Francés played the six characters that take part in the piece (the grandparents, the cooks, and the neighbors) and it is impossible for the audience to choose one among them. They are fused together in and out the stage, they masterly supplement each other between laughs and tears through an exquisite script by Aristides, based on the story of Chicha Mariani, founder of the Abuelas de Plaza de Mayo (Grandmothers of the Plaza de Mayo).

The story is told in two temporary plains that eventually move apart. The play deals with politics, particularly with the expropriation of thousands of children during the Argentinian dictatorship. At present, grandparents suffer in pain the absence (of the granddaughter, of justice and answers) and cut down trees instead of playing the cello. In an act of desperation, she points a gun at her forehead: “either you die or you give up”, says Chicha, and then she resolutely puts the gun down and says “you don’t give up” and walks almost blinded throughout the city to get to that house and embrace the infertile lemon tree that is still alive just as the hope of the characters.

During the 70’s, neighbors tried to find out what was hidden behind the house walls, and the cooks tried to hide it with ingenuity and ignorance.

The six characters come together –whether on purpose or not – at the house. The house transpires ink and breaths freedom, or at least it tries until it is shot dead. The house is another character in the piece, given that it witnessed the events and played a leading role in them.

Malayerba has succeeded once again in taking reality into a language of their own as a theater group. The mixture of nationalities and cultures among its members favors the strengthening of their identity and poetics which place it among the best exponents of contemporary Latin American theater.

Instrucciones para abrazar el aire establishes a perfect balance between scenes. The dramatic lines by de Charo Francés and Arístides Vargas, said as if trying to get rid off a huge burden, and the humor of cooks and neighbors moved the audience. It is a kind of humor that makes people reflect on social and political issues.

In her infinite pain, the grandmother gives specific instructions to face the absence. The grandfather seems to be stronger, but just on the outside. Every morning they tell each other the same story and they go away to cut down birds trying to grab on anything to go on.

Therefore, they have to continue their struggle and hold on to the air, which in this country is filled with dead people, he acknowledges while they both slowly hug an imaginary body and tears fall from their eyes and wet the soil and the lemon tree, which is still infertile, despite rain and years and hugs.