Marta Estévez: “You can have a lot of love in poverty”

Yuris
in Technologies of Communication and Media
2 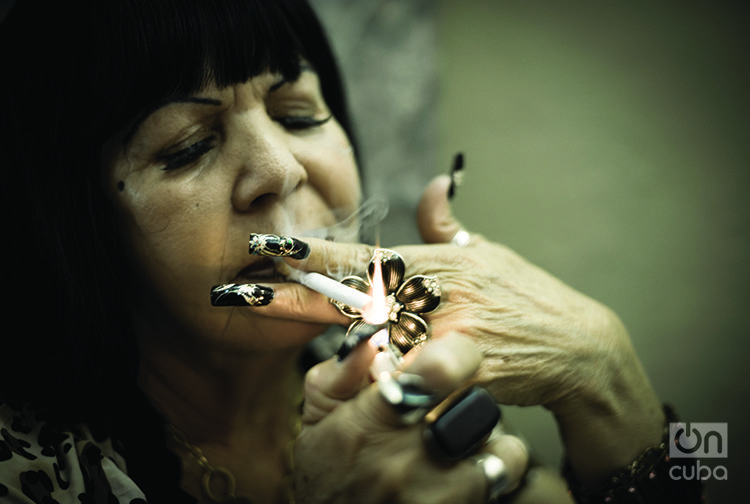 A sign hung on the door of Marta Estévez’s home, in the Havana neighborhood of 10 de Octubre, the day we went to interview her: “We’re unavailable until further notice, please, do not disturb.” We knocked on the door and Marta herself answered, made-up like a 1950s film star: long lashes, powdered face, red lips….

“Good afternoon. Please come in. I was expecting you.”

The photographer complimented her: “But you look great, you’re very beautiful.”

“You can’t yourself go, my dear. I’m an artist. And an artist is an artist from the moment they wake up.”

Marta Estévez’s home is solid but small, without any showiness. Considering the number of people who come see her for her predictions about their future or advice for all types of life’s dilemmas, and considering her extraordinary popularity in this working-class neighborhood and beyond, you could even expect a mansion. But it is an ordinary house, although well decorated and furnished.

“I was very poor as a little girl; I didn’t have toys. Maybe that’s why I like dolls and stuffed animals so much. I have many, as you can see. This one”—she points to a very stylized doll with a long red skirt—“is my gypsy.”

We sit down at a table.

“This is where I do my consults.”

“No, just consults,” she says, batting her eyelashes. “Tell me, am I pretty?”

“Then we’re ready for the interview.”

“Sometimes I get scared.”

“Marta, what is your gift?”

“I can see far into the future. I can see the past, present and future of anyone in my presence. It’s a gift that I was born with; it was revealed to me when I was a girl.”

“The teacher called my mom to complain about my behavior. I wasn’t misbehaving, but it was hard for me to concentrate. I would fall into fits of laughter for no apparent reason. And I would say things, things that I saw, as if in a movie, and then they would disappear.”

“That’s why I couldn’t finish school.”

“But how do those visions come to you? Are they dreams?”

“I dream a lot, and sometimes my dreams have very clear meanings. But other times I simply have a vision. I see a person and ideas come to my mind without any effort; it’s natural.

“Listen, it’s nothing religious or mystical. It’s not Santeria. It’s not fanaticism or anything like that. Many psychiatrists have studied me and they have their theories. I don’t know anything about it. All I know is that things are revealed to me.

“It’s not something that I chose to do. Just imagine. Sometimes I get scared of myself. Can you imagine being able to foresee the death of your loved ones? That happened with my mother, my brother, my husband. It can be very hard.

“Fortunately, that gift has also helped me to save people, who are still here to tell the tale.”

“Has that gift ever weighed on you? Have you ever tried to ignore it?”

“As I said, sometimes I don’t want to know anything. But I’ve confirmed it: if I stop working, I get sick.”

“You are Cuba’s La Faraona”

Marta Estévez shows us her albums of photos and clippings. She has been interviewed by many newspapers and magazines from all over the world. Cuban director Pastor Vega (1940-2005) read one of those interviews and got to know her. She was the inspiration for his film Las profecías de Amanda (Amanda’s Prophecies, 1999), starring Daysi Granados.

“The movie made me famous, and allowed me to travel a lot. For example, I went to Spain. I visited the grave of Lola Flores dressed as La Faraona. This is something I’ve recounted many times: Lola Flores appeared to me in dreams and said, ‘I am Spain’s La Faraona, and you are Cuba’s La Faraona.’ All of that is in Pastor’s movie.

“But the truth is, the character played by Daysi is not much like me. She was very vulgar, a little bit rude. I am very polite. And I have better taste: if I wear a red skirt, I match it with a white blouse. And the movie has certain things don’t have anything to do with my life, either.

“A lot of people told me that I personally should have starred in that movie, that it should have been called ‘Marta’s Prophecies.’ But in any case, the filming coincided with a very bad moment of my life, when I had a lot of problems.”

“Do you tell people the good, the bad and the okay? If you see something tragic, do you also tell the person about it?”

“I am sincere; I can’t allow myself to deceive anyone. If you ask, if you want to know, you have to understand that something very bad can come up. I try not to torment people, and that’s why I think a lot about what I tell them.”

“The cards help me. They tire my mind less. This is very tiring, as you can imagine…. But I don’t need them to see the main thing. Right now I’m seeing a lot of things about you. Do you want me to tell you?”

“Don’t worry, it isn’t anything bad. Right now you’re more nervous than I am.”

Suddenly, for no apparent reason, Marta begins laughing. A long guffaw that lasts for more than a minute.

“You see?” she says, when she recovers. “It still happens to me. It’s the same laugh from my childhood. That laugh was the start of everything.”

“Better to have bread with joy than chicken with sorrow.”

By now, Marta Estévez has seen the world. “I’ve traveled to Spain, Mexico, the United States…. I thank God for that opportunity. I would really like for my children to travel too, to be able to see everything, the good and the bad.

“But I’ll tell you, I wouldn’t change Cuba for any other country in the world. I want to die here. I don’t know anything about politics, and that’s why I don’t get involved in it, but I can assure you that here, people still have their values. You can have a lot of love in poverty. The same love that sometimes doesn’t exist in wealth. “Better to have bread with joy than chicken with sorrow. I have everything here; this is my home. I live for my family, my children and grandchildren….”

“I would love to have been a professional artist and work in the movies. Life took me down other paths, but that is my calling, the meaning of my existence. Can’t you tell? I have art coming out of my pores. That other matter, as I said, is a gift that I didn’t ask for, and that’s why I can’t turn my back on it. So come on now, let me tell you a few things about your life….”