No one can stop the congas

José Jasán Nieves
in Technologies of Communication and Media
0 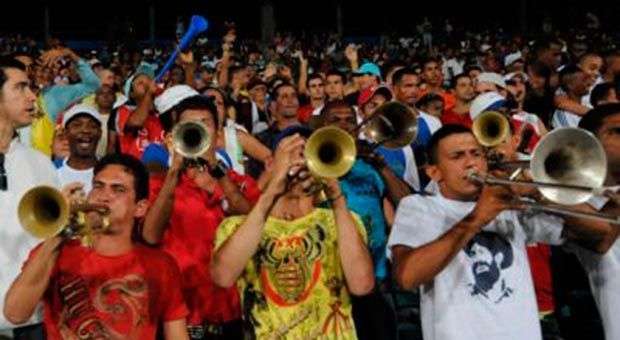 Thanks to popular pressure, the direction of Cuban baseball announced on Friday 22nd the correction of an inconsistent measure: limiting congas at the stadiums to innings breaks and pitcher substitutions.

In recent days, since it was announced the “circular number 4 of the National Baseball Commission”, astonishment and annoyance aroused in thousands of followers of national sport of this country, typically musical.

The attempt to control, in the interest of concentration and “discipline”, the sonorous complement in many games, recalled to most of the fans the scenes of Victor Mesa, Matanzas manager, claiming for the effect of music on one of matches he lost in last championship semifinals.

Such nonsense, now suited by shifting the recital of drums and trumpets to the ends of the sidebands, far from the benches of every team, was answered by public opinion also appealing to a Cuban action before wrong authority, “the mockery “, which was well explained by Jorge Mañach in his ” Indagación” (Inquiry) in the first half of last century.

Alleged acceptances of the National Symphony to liven up games, the transmission of Radio Encyclopedia in ballparks and the presumed conversion of baseball in tennis matches were some of the proposals full of sarcasm and derision with which Cuban people replied against such an attack to their natural joy.

Today we celebrate that the measure is already corrected, but there are still several unanswered questions by all this rise and fall of unreason.

How could a cultural expression be related with the source of “social indiscipline”?

I ask this because hours before the rectifying conference, Commissioner Higinio Velez still said on national television that the intention of the measure was contributing to the campaign calling to combat aggressive attitudes in the country.

Will the “intense” rhythm and no alcohol intake, lack of decency, civility and basic education be the real catalyst for so much anger and bad habit we witnessed around there?

How could decision makers mistake the sound of the conga with “noise”? How can they equate South African vuvuzelas or sirens used in our own stadiums with one of the most untouchable expressions of Cuban identity?

Many fans from C ienfuegos will never forget that image, broadcasted nationwide, of outfielder Lázaro Rodríguez dancing conga while defending his position. Those worried about drums and bells would surely see this act as a lost of concentration of the player, but instead for me, it has been one of the most natural expressions of joy that makes Cuban baseball unique .

Erring is human, but humans who have the responsibility of directing the “greatest socio-cultural event in the country” should focus on less musical matters and avoid failures like this, which for many people was one more drop in the glass of inconsistencies of the National Baseball Commission.

This time, judging by the reactions, they almost fill the recipient, but finally joy triumphed. We will have congas all the time, because we defended them.

Will Dayron Robles be able to represent Cuba? (II)